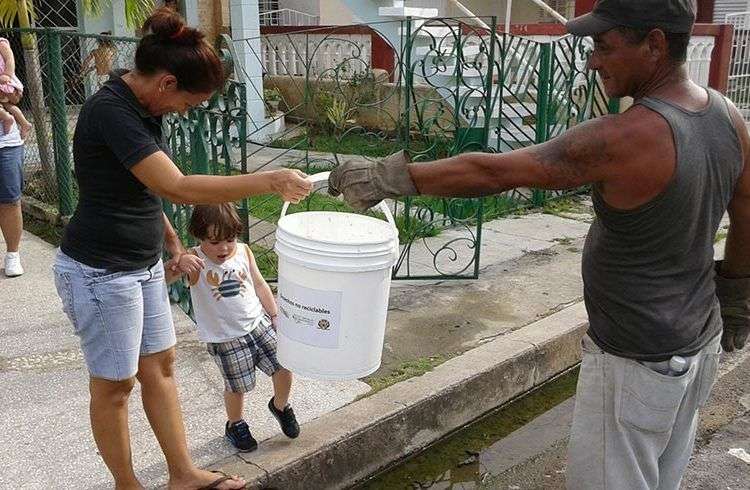 The city of Cienfuegos employs thousands of dollars each month to contain dirt and deterioration of public health caused by the negligence of many of its inhabitants and the material insufficiencies of its collection system.

Authorities of the also known as the Pearl of the South (for cleanliness, among other values​​) that seek to maintain national “fame” promoting initiatives such as collecting “classified” garbage and construction of a new landfill.

With money provided by the French NGO Cuba Cooperation, neighbors of the Punta Gorda tourism neighborhood received three separate containers: one for “organic” waste and other for recyclable and offal from cleaning gardens and yards; which are collected at the doors of the houses by the crew of a collector car.

After eight months of its implementation some inefficiencies in the system are noticeable, but especially the survival of unhealthy habits in people who persist in creating “garbage dumps” in some corners of the community.

“He who fails to comply with this is failing because he wants to” say Heberto and Grisel categorically, a retired couple who recently returned from a visit to Germany. “There have been very few days that the truck hasn’t shown up, and although it is true that four in the afternoon can be an hour early for those working, scavenging is spinning like until six,” they say.

“And it’s amazing that they come every day, because in the city where our children live, back in Germany, pickers pass only on certain days of the week,” says the couple.

Although the experiment sets specific days for collecting each type of garbage, operators do not differentiate and put in the truck all they receive. It is unnecessary to worry because the city lacks a differential processing plant.

To change that situation, a new repository is being completed with the aim of obtaining biogas out of fermenting garbage.

“Only the matter that decomposes will be buried after the collected material is reviewed by the operators of the landfill and they take out the recyclables or others that hinder decomposition”, explains Luis Acuña, deputy director of communal services in the province.

“After five to eight years we will test for the type of gas being produced there, and if they are useful for combustion we will sell to nearby industries,” Arairis Messiah investor of the landfill they started to build in 2008.

But for that to happen the local government must also transform the current collection system.

“What is now being done in Cienfuegos is counterproductive with the new landfill,” confirms deputy Acuña. “In our trucks is collected almost everything together, including construction debris, which are now the main problem of waste in the city,” he abounds.

As a possible solution the authorities entrusted the location of a specific area for depositing debris and encourage the emergence of cooperatives that collect them in homes and then recycle it. But so far they have not moved from words to deeds.

Meanwhile, the pride that boasts many Cienfuegos people for living in the cleanest town in the country is becoming less in the vicinity of the suburbs and even in the center itself, which cannot be sanitized at all or with the monthly mobilization of workers, loaders and trucks from state enterprises trying to collect waste accumulation in the streets.

If the experiment works they could turn their trash into profit and become a precedent for the country.

"Una raza", a cultural bridge between the two shores