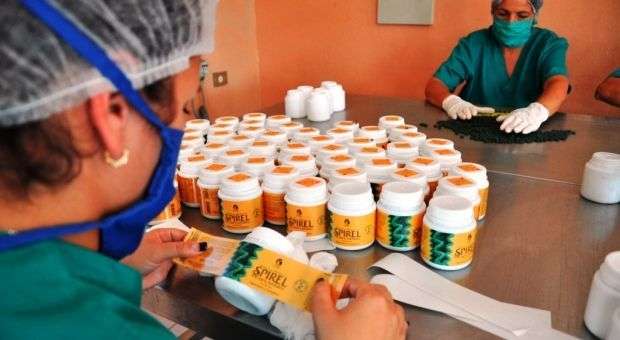 In many cases the wise decisions take the reins to a problem, or just change the course of events. Genix Labiofam , for example , is a company that rose from the ashes thanks to a smart arbitration . Today, it is within the business group Labiofam as a producer and marketer of natural products and works to have a happy ending to his story.

We cannot speak of Genix without mentioning the Spirulina development in Cuba. Once discovered its use as a nutritional supplement, the country invested in infrastructure and human capital to meet the needs of athletes primarily and health institutions. Then the entity was created under the company name of Microalgae and Derivatives Production and Marketing Company, which later was extended to include diversification with recognized value added, such as Royal Jelly, Noni, Ginseng and Vitamin C.

Genix started in 1996, under the Ministry of Agriculture. To its insertion in the Labiofam Group Spirulina production was fully subsidized by the state, the company failed to self-finance and there was not an agency or entity that invested in it. The year it produced the most only reached one million and a half pesos.

“For a long time we were working on tiny infrastructure conditions, with extremely inefficient drying system that polluted productions. Somehow we managed to remain standing, and we developed the Shaman cosmetics line, with extract of Spirulina , but we were staying as a very small company without any funding , ” Niurka Leon , deputy director of Genix – Labiofam, says.

Another factor that led to Genix to almost disappear was the fact of not belonging to a large organization to ensure its sustainability. To this also add that following reorganizational policies during the so-called Special Period that took from them the ability to import and export.

In late 2010, by decision of the Ministry of Agriculture, Genix is inserted into the group Labiofam . Dr. JoseA. Fraga Castro, director of the recognized biopharmaceutical and chemical producer entity, was always interested in the development of Spirulina .

The shift was radical. In just two years has expanded and diversified its production, which transcend the field of Spirulina. From then the main objective is to promote under the protection, counseling and supervision of Labiofam an extensive range of natural products ranging from those that include Spirulina, the bark of mango and the banana pseudostem derivatives up those obtained from corn.

“From Six supplements and 18 cosmetics Genix produced and marketed, we turn to any number, because we are still assuming productions that were scattered within the Labiofam business group. Today it is part of us the Green Laboratory Medicine VIMANG, five units of agricultural production and the Cienfuegos glucose plant, “the executive said.

Now this company is undertaking other changes and works to meet a large number of projections that can bring great benefits to humans and it. It diversified its product portfolio with the acquisition of more than ten herbal supplements also based on honey, propolis , hibiscus , blood products and other compounds , medicinal creams and cosmetics , goods that go on sale to the domestic and foreign market.

Belonging to the biopharmaceutical group allows it to have an exporter and importer (LABIOFAM SA) to facilitate the purchase of supplies and raw materials needed for production, in at the same time it opens the way for marketing to foreign markets.

“Currently we are establishing relationships with about six countries, among which Italy stands strongly. In the Caribbean region there are no plants for cultivation of Spirulina , which also allows us to make us a leader in the production of that type. The rest of the products are made only in Cuba, another element that helps us achieve international market position, “Niurka said.

Genix Labiofam closed August with gains close to the 17 million pesos. Its evolution has not only affected positively the economy and society, but also the quality of life of those who are part of it. Yesterday in bankruptcy, enjoying the splendor achieved today, trying to take it to the top, and most importantly: stay there.

Strategies for updating the Cuban economic model include the implementation of Program for the Development of Traditional and natural Medicine, which responds to Guideline 158 approved by the Sixth Congress of the Communist Party of Cuba. Despite this being a valuable modality for the country’s development, it has not received the necessary attention.

The recovery of this sector pursues expansion of research in order to promote the development and use of natural and traditional medicine. In tandem , as designing a policy of wholesale and retail prices to stimulate  producers and the use of green medicine for the population. They will also implement direct contracting between natural product makers and different forms of agricultural production .

Popular voices from Europe and Latin America will take over Havana

Pestano and Lazo: a reunion of images