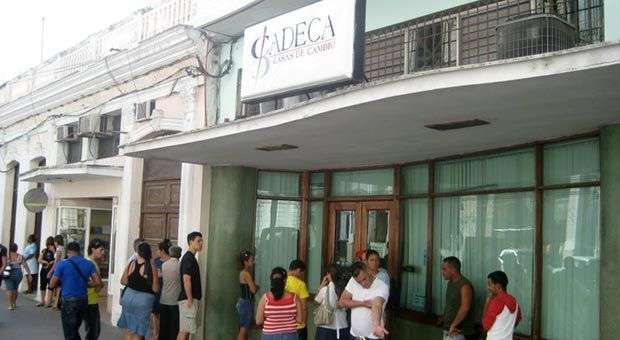 The Cuban press echoed on Thursday, October 24, 2013 the beginning of the end of dual currency. Many people breakfasted listening to Ariel Terrero, a journalist specializing in economic issues, explaining on national television the official note published on Tuesday, October 22.

Terrero, who was translating economic technicalities to conversational Spanish, began by recalling that there are “in Cuba , both dual currency as dual exchange rates, and that creates a huge amount of distortion, especially in the business sector of the economy, which have effects on the rest of the economy. “

To dispel doubts, Terrero slowly said the Official Note “clearly states that we are in the beginning of the entry into force of a set of measures to establish monetary and exchange rate unification. In other words: at the start of the schedule. “

He noted that it will require certain gradualness in steps, because “we are talking about really solid changes , which can be complex.” He mentioned that new legal and accounting standards should be developed.

In Cuba, companies and all entities that handle money operate with double counting, that ” usually obscures reality of the functioning and economic efficiency of enterprises.”

“Moving towards monetary and exchange rate unification, at one time, will actually have as one of its main virtues the creation of transparency in economic sector.”

One benefit of this measure, according to Terrero, will be the establishment of “new exchange rate that is more in line with reality.” Terrero said that we must find a point of monetary convergence that “really expresses the reality of Cuban economy especially for the business sector.”

Currently, in Cuba there are two exchange rates: the one in force for companies (one Cuban peso (CUP) corresponds to one convertible peso (CUC)), and the one decreed for natural persons throughexchange houses (CADECA), which tells that 25 CUP corresponds to 1 CUC).

Terrero explained that Cuban economy today has both strengths and weaknesses to perform this step .

The Cuban Central Bank (BCC by its Spanish acronym), on its website, said that the elimination of dual currency “is linked to Cuban economic growth, the increased deficit financing by Current Account of the Payment Balance (…) and the increasing of international reserves to acceptable levels. “

The economist Pavel Vidal, former BCC Monetary Policy Committee specialist, wrote that “to eliminate dual currency we must devalue CUP official exchange rate, unify it with CADECA´s exchange rate and give it convertibility in the business sector.”

Terrero added that at an early stage, the first steps will be directed to legal persons, that is, the business sector and the state budgeted units. He recalled that, according to the note, some experiments will be developed in some places, so that people could buy using CUP which today is sold in CUC.

Near the end of his explanation, Ariel Terrero cited ” something very important” from the speech in which Raul Castro predicted proximity of monetary unification and its consequences. “The elimination of monetary and exchange rate unification will enable undertaking greater scope and depth transformations in wages and pensions, prices and tariffs, subsidies and taxes.” *