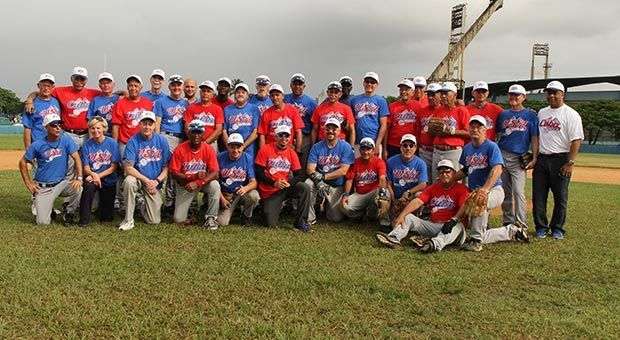 The legendary player of Industriales, Rey Vicente Anglada, took on the challenge and this time he played as second base of Boston veterans in Havana, during one of the friendly softball matches, which are carried out for five years by Americans against former Cuban players.

The game, described as “an old friends match” by Michael Eizenberg, initiator of the project, served to bring together on the ground of Havana´s Sports City to national baseball glories as the aforementioned Rey Anglada, Tony Gonzalez and Pedro Chavez.

The interesting thing about the game, beyond competitive quality, is the teaching that sport can be much more than muscle and technical prowess. This Thursday at Juan Ealo stadium, also calledBeisbolito due to it is exclusive for children, attendees could feel the atmosphere of camaraderie that Americans and Cubans have achieved with these five editions of the matches, which, sometimes inBoston and others in Havana, join players from both countries.

Anglada, from his defensive position, smiling challenged Tony Gonzalez, while columns of laughter rose from both dugouts regardless of the rain that stopped the match several times.

“This is a great idea,” Anglada said before adding: “Sport can unite, and that is the main virtue of this type of event: joining together under a single passion.”

When asked about why he played with the visitors , the former Industriales head coach answered smiling: “we came to play and have a good time among friends, unfortunately the second baseman of them had problems and could not be with us, and then I agreed to the invitation to occupy his post. In the end, it is not about winning but to enjoy the moment. ”

The game was sealed by rain in the seventh inning when the Boston veterans were ahead in the score 15-9.

On the ground, still wet because of the downpour, rivals embraced each other and raised their caps thanking the audience that applauded them from the stands.

Between jokes in Spanglish and feelings of gratitude, a family of men bonded by the same passion, left the field in small groups, with the hands on their shoulders and many laughs. I was sitting on the stands and the words of Tony rang in my ears: “This is a game of friends, brothers; we can not let the hatred of others to take this out of us. With small things we can make very large ones, such asuniting people. ”

Officials of the U.S. Interests Section in Havana express their opinion on the game :

Mr. John Caulfield, Chief of Mission of the U.S. Interests Section in Havana, who was invited to throw the first pitch by northerners, expressed his satisfaction with this type of event when stating that this “is a good opportunity for Cubans and Americans to know and understand what culture really means. If we had relations of this kind in all areas, it would be wonderful.”

Before the question of whether these exchanges could become in bridges of understanding between the two peoples, the senior official said, “I wish! We do not know that, but the players really have much fun. This is not a government issue, but of people.”

The shortstop of the American team was Conrad Tribble, Deputy Chief of the U.S. Interests Section, who had words of praise for his opponents and stated that “it is an honor to share the field with such quality players. Personally I practice with some of them every Saturday and this is a great opportunity for me, the winner is not what matters, this is essentially a game of friendship. ”

On the Cuban side, Carlos Lamar, methodologist of the National Softball Commission recognized the importance of these events and confirmed the support of INDER (Spanish acronym for National Institute of Sports, Physical Education and Recreation) and the Cuban Baseball Federation for the development of the matches.

Hugo Cancio, president of OnCuba, who was also invited to the game, noted that “culture and sport always build bonds of friendship, reconciliation, knowledge. This is a great opportunity to untie a bit the knot that has strained relations between the two peoples. I think this type of event should be held more often. ”