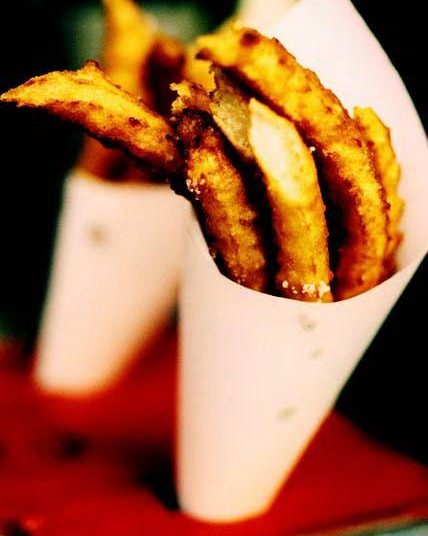 The mixture seems simple to prepare: flour, eggs and sugar to create the classic dough that passes through a very peculiar artefact that squeezes it through a nozzle of a few centimeters in diameter, falling right into a small saucepan filled with hot cooking oil.

That is the classic churro for us, that we inherited from our Spanish ancestors, those we used to buy at the entrance of the school when the bell rang, when we were going home after work, when we are craving for something sweet to avoid fainting by the intense and oppressive heat.

These days the image of the little churro, piled with five others in a small paper cone, has changed a bit. Since the opening to the private sector or "self-employment", new term for this practice, this has been one of the ways business has gained an unprecedented growth in the category of food selling.

This growth has forced the ingenuity of its vendors, who began to sell it at a larger size and stuffed with different flavors. The first of such establishments that became famous was the one located in Calzada and K streets in Vedado.

The rumor spread like fire through the entire city and the lines in the cafeteria were endless. Never mind that the price was a little higher, everyone wanted to taste those churros overflowing chocolate, strawberry or sweetened milk. It was so high the demand that often sellers were without some of the ingredients to satisfy all customers

This was followed by an epidemic of churreras in every corner of the city in the form of coffee shops or simply in carts that made transportation easier.
For buyers, standing the heat and the endless lines is rewarded with a sweet taste on the palate and an entertainment for a television day and games at home or at a friend’s house.

Emilio Delgado, while he waits for his order of churros stuffed with chocolate believes that "it was very good to generate new ideas like this to bring new products to people who sometimes get bored of the same things in all places."

At present there are about 15 churrerias among which we can mention the ones on the intersection of the Infanta driveway and San Lazaro Street, Cerro and Boyeros, the Waka Waka, right outside the Tropicana cabaret and Cuquita on 31 Avenue, in Marianao, near the Military Hospital.

It is also interesting how churros have evolved. The Cuquita cafeteria, which these days is in the last stages before its opening, will specialize in the sale of stuffed churros which will be marketed based on the artificial sweetened flavors … where’s the news? The menu will be complemented by new contributions to the culinary churro "art", as they can be ordered with fillings of meat, sausages, cheese and other surprises their creator prepares to amaze the most discerning palate and to attract many customers.

From skinny and almost imperceptible flavor, churros have succumbed to the need for trade and culinary creation of the new "self-employed" who have taken advantage of their potential to exploit them and turn them into a competent product in demand in Havana.

María Viván returns to the stage