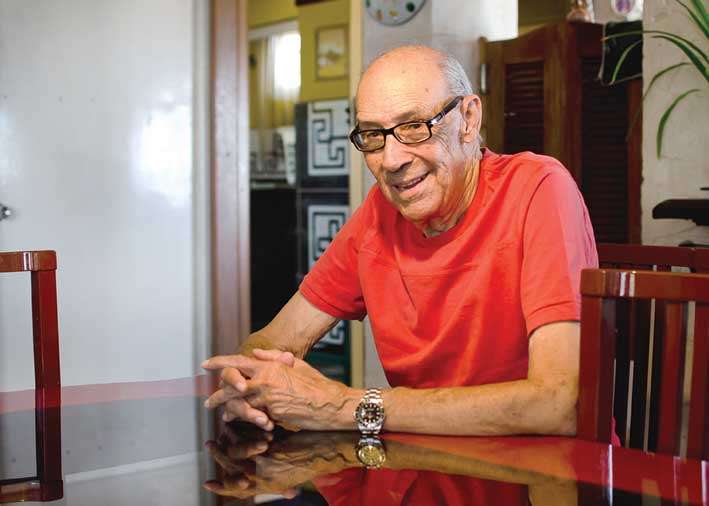 That’s what I call passion, blind faith in yourself and in an ideal. As [José] Martí said, “The angry sea gives a weak idea of the waves provoked by passion.” It is that whirlwind that springs from within us; the least we can do is unleash it. It is that sensation of freedom, which becomes serene with the years, to which Miravalles refers when he says “My great happiness has been to devote myself to what most satisfies me: being an actor.”

I think that explains his frequent smiles, and those bursts of laughter that have been captured quite a few times in the history of Cuban cinema, and which today continue to make him endearing.

After 20 years without filming in Cuba, Miravalles received a script by Eduardo Eimil from director Gerardo Chijona. It is based on and named after a novel by Eliseo Alberto (Lichi) Diego, called Esther en alguna parte (Esther Somewhere).

“In all of these years, I have received proposals for work, but none stimulated me like the script for Esther en alguna parte,” Miravalles says. “At first I thought it was very long, and we decided to develop a second version. That one didn’t convince me either, until I received a third one, which I found to be excellent. I knew Chijona and his work, and he presented me with a plot that satisfied me very much: artistic, not commercial, that’s why I accepted it. I feel very lucky to have done so.”

How did you create Lino Catalá?

“Lino Catalá is completely different: he is sad, has a difficult conflict in the story, and uses gestures and impressions a lot. I had to focus on facial expressions, which is not very common in Cuban cinema, but I think I was successful. I am not the best, nor do I aspire to be, but I do consider myself to be a professional. I started working in 1944 and I’m still going. I have made more than 40 films, and not just in Cuba; also in Mexico, Nicaragua, Venezuela, Colombia, and Germany. That’s 70 years of experience, during why I have only played parts that I thought would contribute something to me. That is my life. And I am proud that some of my films are now part of Cuban cinema.”

What was your experience working with your friends in Cuba again?

“Friendship and love. I have a wealth of friends here. We have mutual respect and love for each other. I think that Chijona is proud of having made this movie, which for me is ‘equilibrating’; I don’t know how I came up with that word, but that’s what it is. It is a strange film, but that is its attraction, and it looks like it’s going to go a long way.”

Three quotes from Cheíto León, in the film El hombre de Maisinicú, are among the 10 most memorable in Cuban cinema, and “Alberto Delgado, cará…” is one of them. Without question, you have left an indelible mark on our filmmaking and public. What was your reencounter like with the Cuban public, which so appreciates you?

“You know, over my career I have been applauded for up to 15 minutes. And it was the result of my work and effort, because one thing I’m not is pretty,” he says with a smile. “I think that the film has been well-received. Many people in the street don’t recognize me right away, but they do say, ‘Hey, he looks like Miravalles.’ I feel like the Cuban people love me very much. When I returned to Havana for the first time, I went to see a children’s show at the Karl Marx theater. When I came out, I was surrounded by a sea of people. Man!!! I became so emotional that I started crying. The thing is, I was born on Callejón de Chorro. I’m from Havana!! And I come to Cuba because people have a lot of affection for me here.”

How did you remake your career in the United States?

“I have only made two films, one of them with Rolando Díaz: Cercanía (“Nearness,” 2008), about emigration; it’s a comedy. But I’ve had various secondary roles in Latin American productions. And there’s another project in the works with Chijona. We’ll see what happens. Because I’m 90 already, you know,” he says with a smile. “In general, I try to do what I know, and that makes me satisfied. I’m happy; I live peacefully with my wife in an apartment in Miami. I’m not the one who starts or determines anything. Life takes you down complicated paths, and what I’ve done is try to find a balance.”

And how do you carry Cuba in your heart?

“Cuba is my homeland.”