Juan Miguel Mas: dancer and coreographer for the group 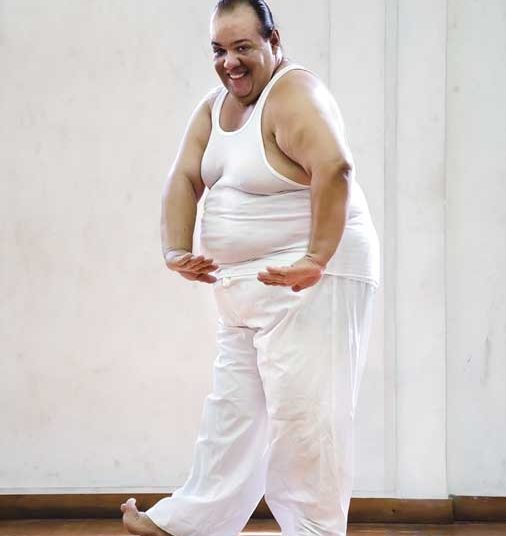 My career began in 1989. I had a very strong desire to dance. I always danced at home, “behind the scenes.” I would put on my grandmother’s robes and wear them as I whirled around the house.

I was always a “stout” boy and did not have the opportunity to enter a dance school. In 1989, a special course was given, Cuba Danza, to celebrate the 30th anniversary of the Compañía Nacional de Danza Contemporánea (National Contemporary Dance Company). It was a course for people with no professional training. I showed up at the venue, the Teatro Nacional, and when the woman who was registering participants saw me, she said, “You are very fat. How are you going to dance? Look, we have an option here for observers. It costs 100 pesos.”  “Ok,” I told her. “I’ll take the 100-peso option.”

So I attended the classes. It was the first international course, and there were people from all over the world. When I entered the class taught by Lorna Burdsall, who was originally from the United States, she asked me what my intentions were. I told her that I really liked to dance and that I wanted to learn how — it was my dream — but that I had enrolled as an observer because my physique prevented me from dancing. “They might have told you that, but in my class you are going to dance,” Lorna said to me. She then allowed me to “move around,” because it cannot be said that I was dancing. I didn’t know anything about cultured dance, only what I had seen on television and in theaters.

In the choreography workshop, the professor, maestro Ramiro Guerra, also asked me about my intentions. I told him that I was interested in dancing. So he began to play with my imagination, and he and two of his assistants created a character for me: the Giant Baby. Eighteen days after the course began I was dancing in the Mella theater, on January 18, 1989. The production featured scenes depicting the absurd, and the Giant Baby was one of the characters. It caused a big impact when the audience saw how voluminous I was and that I was wearing a diaper. It was my first professional appearance and it was very well-received.

Eventually I created my own dance company, Danza Voluminosa. We have performed many times in Cuba and in other countries.

Cuba Gets Ready at the Latinoamericano Stadium

“Now we have to stay in the top"