“Now we have to stay in the top” 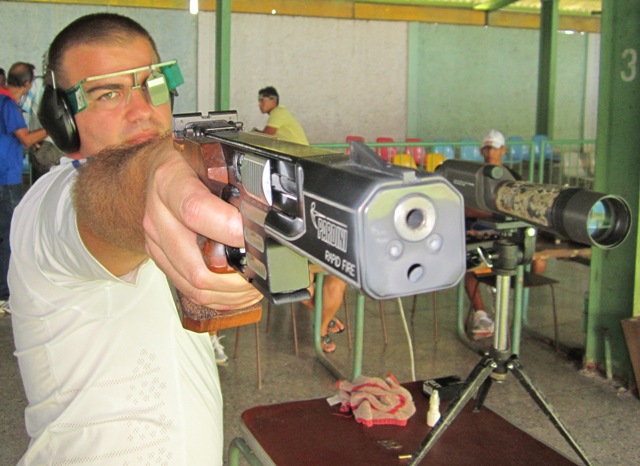 Holguin native Leuris Pupo Requejo will always remember August 3, 2012 as one of the happiest days of his life. At the Royal Artillery Barracks, London, the specialist 25 meters rapid fire pistol became the first Cuban Olympic champion in shooting sports, an award for his dedication and sacrifice of more than 15 years in the national team.

A little shy, soft-spoken that sometimes you mistake with a slight stammer, Leuris shared OnCuba emotions he felt while listening to the Cuban anthem from the top of the podium under the five rings.

"Imagine, when I saw the banner at the top I felt so many things I could not identify the sensations. My chest got puffed up, my throat tight. It was only the next day when I realized I was Olympic champion. I got up and I said Pupo, hell, you did it, and I confess I shed some tears, "he reveals.

Pupo Requejo welcomed us at the end of a practice in the capital’s Enrique Borbonet Training Shooting Center, an installation that seems stuck in the past. With a view to a huge dump that surrounds the place, Pupo described the many limitations he had to overcome before being crowned at the London Games.

"The first two years of the cycle, 2009 and 2010, we were almost out of bullets. I had to do exercises in dry and that way it is hard to stay motivated. But despite that the training planning worked, the role of the entire team, the psychologist, the doctor. We made an emphasis on the technical side, we had no other way to go. "

Leuris, who began life as an athlete in the Pedro Diaz Coello Sports Initiation School in 1988, arrived in 2011 at the Pan American Games in Guadalajara to try to revalidate his title. Problems with the quality of his ammunition prevented him from achieving that and he got into a shocked. "I felt well prepared to revalidate these continental medals. But then I focused on the Olympics, I told myself I could come back with a good result, that everything would be fine with the mechanics of my gun. I arrived 15 days before the competition in England and in training I was fit, the gun did not fail me and that gave me more confidence. I always say that in shooting you compete against yourself. "

On August 3 Pupo won the first Olympic title for the Cuban delegation, perhaps the most pleasant surprise among Cuban competitors. With Olympic record of 34 points in the final, Pupo touched glory with his Pardini gun, a little obsolete compared to those used by his rivals. There were eight rounds of shots, each with five shots in just four seconds. To mark you to make an impact of 9.7 or higher "I started with a bad series of three, but I could correct my mistakes well. I was so focused that at times I thought I was here training in Cuba. I managed a trio of consecutive perfect series and that I almost slipped into medals. When I secured the bronze thought I could improve on that color. But I didn’t let anxiety dominate me. I just focused on achieving four-five impact series. "

tose of us that lived the Leuris emotions through the TV were baffled by the coolness he showed. When he won the gold he stayed calmed with selfless attitude. "A little cold," many of us thought when he didn’t exteriorized the joy he felt. "In this sport you learn to control your impulses.  I lived the emotion inside, what happens is that I was so focused on the competition that I was mesmerized. That night I could not sleep, I went to bed at five in the morning. I kept the medal hanging on my neck until I got to the room. The next day was when I had rationalized that I had fulfilled the dream of every athlete. "

Leuris thanks the daily samples of love he receives from people, every coach that marked his life as an athlete from Moraima, Omar Sanchez, Norberto Osvaldo Ramirez and Juan Camilo, to Meinardo. "Notice that now many do not want to charge me when I take a taxi to Cerro Pelado (training center). In Holguín that was tremendous. They said they had never felt such a strong emotion. In my neighbourhood Cerro, where I have lived for over 10 years they also entertained me. They sent thousands of mails because it was not only a triumph of Cuba, but in Latin America, to break with the European and Asian hegemony. "

"This result is also of my mother Arelis Requejo, architect of all my way, my wife Yimnay Cruz, who is six months pregnant (Celine is the name chosen for the baby), my town, fellow sports people …"

What are the next goals?

I am still missing the world gold medal and I want to give everything to get it. This month I will participate in the Granada Ibero-american, in Spain, and then in the Finals Cup in Bangkok, Thailand. Now the pressure increases, because one gets there as an Olympic champion and that status must be maintained.

In love with an a "endangered" trade