Both the Kremlin and the Cuban leaders are aware that it doesn’t make sense to cross the red lines in relations with Washington, but also of the geopolitical convenience for both of them to build strategic cooperation. 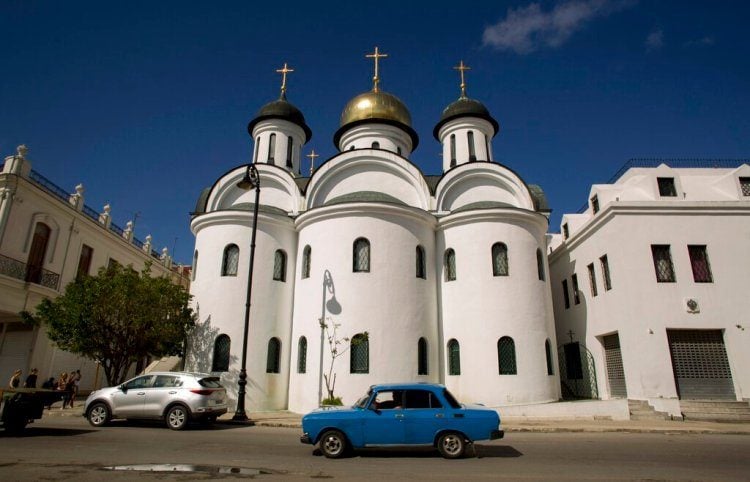 A Moskvitch car from the Soviet era circulates in front of the Russian Orthodox Cathedral in Havana. Photo: Ismael Francisco / AP.

President Miguel Díaz-Canel’s visit to Russia is of the greatest relevance to current Cuban foreign policy. The second meeting between the president of Cuba and his Russian counterpart Vladimir Putin is taking place in just one year. Such intensity in bilateral ties was not registered since the time of Cuba’s special relations with the Soviet Union.

It was with the presidential visit of Dmitry Medvedev in 2008, during the period when Putin was prime minister, that Russian-Cuban relations found the ascending course that has characterized it until today. Without detracting from the importance for relations of the central figure of Putin, who made a second successful visit to Cuba in 2014, when the Cuban debt issue was resolved and bilateral relations were strengthened, it is of relevance to remember the adverse precedent of his first visit in 2000 as a result of which the Lourdes base was closed.

At that time, Fidel Castro declared the need to repair the bridges between Moscow and Havana, taking into account the new realities in both countries and the world. As an expression of Cuba’s awareness of the new world balance of power, the then Cuban president emphatically declared that it was not of Cuban interest to finish building the Juraguá electronuclear power plant. Nothing indicates that this position will be reviewed.

The new Russian relationship with Cuba is not ideological, it is based on an important geopolitical consensus.

The Cuban diplomatic patience in not abandoning the contacts established in Russia despite the disappointments with the Yeltsin administration started bearing fruit when the internal dynamics changed in the mid-1990s. By 1996, in Yeltsin’s second term, a nationalist and skeptical revival of cooperation with the U.S. was reflected in a new Duma with important sympathies for resuming relations with Havana.

Today they are consensus policies among Russian elites, which include not only the United Russia party but also the majority of their closest contenders in the Duma, the Russian Communist Party among them. The position in favor of better relations with Havana includes the leaders of the two parliamentary chambers Viacheslav Volodin and Valentina Matviyenk, with frequent meetings with the Cuban authorities, the different branches of state power, including the military establishment and even Patriarch Kirill of the Orthodox Church who met with Pope Francis at Havana’s airport.

Rather than looking for offensive capabilities, the Russian projection in Cuba is better understood from the defensive geopolitics with which Putin evaluated the decline of its status of great power and the expansion of NATO to the east in the 1990s, during the so-called honeymoon with the United States under President Yeltsin.

Both the Kremlin and the Cuban leaders are aware that it doesn’t make sense to cross the red lines in relations with Washington, but also of the geopolitical convenience for both of them to build strategic cooperation. In this sense, the greatest advantage for both is to preserve and make sustainable an economic and political cooperation between the two countries in which Cuba continues being the door and the historical precedent for a special relationship between Latin America and Russia. For that it is essential that the Cuban political regime survive.

Unlike in the 1990s, when Russia’s internal policy was betting on the United States as the great ally in the economic transition to market economy, today China appears as the preferred partner in the balance of the great powers. In the Cuban context, Russian investments and cooperation in spare parts, military armament, railroad modernization, and energy security, are complementary, not in rivalry with Chinese participation in the Cuban economy.

The alliance and cooperation discourse between Moscow and Beijing, with occasional mentions of areas such as Latin America and Cuba in particular, has become, with some discretion, more present in the discussions and documents of great strategy of these alternative powers to Washington. Although those visions precede the arrival of the Trump administration to the White House, they have been strengthened as a result of its unilateralism.

Cuba: The return to the triangle, alliances and balance

Even before the revolutionary triumph of 1959, Cuban nationalist sectors proposed a foreign policy of triangulation with third parties, particularly other great powers to increase negotiating capacity and diversify ties with respect to the U.S. Today those possibilities are growing.

For Cuba it makes perfect sense to seek a privileged relationship with Moscow given the history between 1960-1991, the period after 2006 and the will and priority expressed by Russian foreign policy (it is one of the few times where emphasis continues to be made on the ALBA).

Raúl Castro leaves in this area an important legacy for bilateral relations. Fidel Castro repeatedly insisted on forging a counter-dependency scheme, prioritizing even in the first half of 2000 the ALBA-Venezuela relationship, given the weight that, outside of energy, relations with China were acquiring. Russia did not play a fundamental role in the foreign relations of his mandate. In contrast, Raúl Castro boosted with great motivation relations with China and Russia, without postponing that march to give priority to the ALBA.

In terms of bilateral ties, Cuba aims to benefit from projects discussed with Russia in the last decade and that are already having an impact on the island in areas such as energy security, transportation infrastructure and security cooperation. The presence of Cuban students is already noted in Russian universities, with the aim of recovering a level of social, cultural and educational contacts that Cuba had with Russia, with no parallel to another great power, with the exception of the United States before 1959.

Structurally, relations between Russia and Cuba have been strengthened by the coincidences between the two countries in a triangular logic in which both reject U.S. positions of hostility and double standards towards their respective political regimes. The Russian strategy of great power grants significant geopolitical importance to relations with Latin America as an area from which to reciprocate the U.S. incursions in the border area with Russia, particularly in the Baltic, Ukraine and Georgia. Cuba has historically been the Russian door to the region, particularly towards the ALBA Group.

The Cuban-Russian reconciliation after the difficult 1990s is already a mature relationship at the level of great ideas, the challenge is to turn those projections into specific realities of investments, trade and collaboration. There are important challenges related to the new Russian structure and the viability of the Cuban reforms that the two governments have to weather. Although the Putin government has more leverage to handle Cuban breaches of contracts than China, given the great state intervention in large Russian corporations, Cuba is obliged to put its economy in order to make relations sustainable.

The doors in Moscow and Beijing are open to greater collaboration with Cuba with unprecedented possibilities in the history of those links.

If Cuba has not made more of those opportunities, it is due more to its incapacities and economic inefficiencies than to the lack of political will of the parties. To some extent that can also be said of relations with Europe although there the impact of the U.S. embargo/blockade is greater given the normative framework of allies that characterizes the Washington-Brussels axis. Diplomacy, no matter how well it works, cannot reach its potential without an economic model that takes advantage of its achievements.

Cooperation between the two countries has its own logic of mutual benefit, but it is consolidated and familiarized to the same extent that the U.S. position reinforces it.

If during the Obama era Cuba had incentives to further self-restrictions in contacts with Moscow to mitigate conflicts with Washington, today that is not the case. The island’s foreign relations are regularly geared at Washington’s greater hostility, Cuba’s greater triangulation with other great powers, whether they are U.S. allies like the European Union as well as strategic rivals like Moscow and Beijing.

Another important issue is the coordination between Havana, Moscow, Caracas and Beijing to circumvent the effects of the increasingly restrictive financial sanctions implemented with particular zeal against Cuba by the Trump administration.

In that sense, the will of governments is heard more and more frequently, not only in the United States’ rival countries, but also European allies to look for alternatives to the use of the dollar in some international transactions. These desires clash with the reality that there are no assets with greater security in the world economy than the Americans.

Recognizing that the cost of avoiding the dollar remains high, the incentives to explore these routes are increased with the implementation of sanctions against banks punished by Washington for alleged illegalities that are not based on national, community or international law.

In the context of the Venezuelan crisis, and the U.S. commitment to make the transportation of oil to Cuba difficult, Russia wins in high profile based on its status of great power with veto in the UN Security Council and being a large oil producer and transporter. With the United States entering the 2020 election cycle, characterized by political condemnation of Russia, Moscow has little incentive to postpone increasing its ties with Cuba. Meanwhile, Havana is very interested in raising the level of those relations.