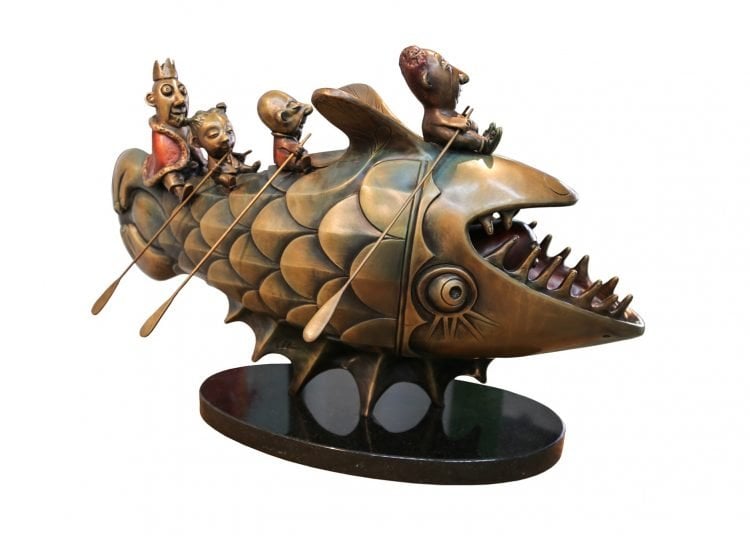 Once I wrote a story in which Martí (I am referring to José Martí, the National Hero, sorry if I have offended him by not naming and titling him) would get off the podium where we used to see him in Parque Central, would go to a corner where the small stores are near the tourist bars and would start crying.

He was there and felt really down. They had used him many times, they had been arguing too much about the belonging of the image of him on one side and the other they had been arguing too much about where his image belonged, more or less like in El color del verano, Arenas’s novel. So many times had he felt the traitor’s lips on his stone cheek, the flatterer, and the mediocre who had finally collapsed.

In another fantasy, and this one remains unpublished among all the papers I keep, something had suddenly happened that the busts of stone, bronze, marble or whatever the material started eating the Cubans. They had made their appearance in the most terrifying way possible, the cruelest and at the same time the most human.

Slowly he would crush them with his jaws, and he had reasons to slow down or speed up their movements: he savored or swallowed according to the demands of his palate; he bit with hatred or barely touched the body with his teeth when he felt sorry. But, he ended up eating all of them.

It is, in this story, a kind of national rebellion that had brought him down from his pedestals wherever they were: in a field, a factory, a school, a hotel, an old abandoned lot…no matter the context, wherever a bust had been built, he used to see the same face and almost always symbolizing the same thing.

But, all the effigies were tired at the same time, and as in the image of one of the poems of the true Martí (…the marble men jump…), and contrary to that other by the artist Pedro Pablo Oliva, in which he is sleepy and still in an armchair, he dismounted; and one here, another there, in that way insurgents and rebels had ended up doing what I have already written.

Perhaps it’s one of those things that one writes when one is overwhelmed and one of those that one remembers when one reaches the limit because of the same thing. Perhaps the image is due to a certain obsession with poetry that before, a long time ago, a group of students used to recite in different parts of the city. We carried it with us, leaving it in the ears of workers in the fields, in the city; we read at ground level or from platforms where there were officials: I dream of marble cloisters, where in divine silence, the heroes, standing rest….

I dream of marble cloisters

I dream of marble cloisters
Where in divine silence
The heroes, standing, rest:
At night, in the light of the soul,
I talk to them: at night!
They are in line: I stroll
Between the rows: I kiss

Their stone hands: they open
The stone eyes: they move
Stone lips: tremble
Stone beards: they wield
The stone sword: they cry:
Vibrate the sword in the scabbard!
Mute, I kiss their hand.

I talk to them at night!
They are in line: I stroll
Between the rows: tearful
I hug a marble: “Oh marble,
They say your children drink
Their own blood in the cups
Poisonous from their owners!
That they speak the rotten tongue
Of their ruffians! That they eat
Together the bread of opprobrium,
On the bloody table!
That they lose in useless tongue
The last fire! They say,
Oh marble, sleeping marble,
That your race has already died!”

Throw me ashore from a boat
The hero I hug: grab me
From the neck: sweep the earth
With my head: lift
The arm, the arm looks
The same as a sun!: resonates
The stone: look for the belt
The white hands: from the baseboard
The marble men jump!

What’s this all about? About nothing and everything.

But, if I had to write down something on any subject, I would stretch out my arm to put an idea on the work of the great Pinar del Río painter Pedro Pablo Oliva, as I have mentioned.

It is known of his family connection with the death of the apostle, a story that he has related many times and that perhaps left him that direct need to rework the symbol of Martí. He exemplifies the creator who did not suffer because of the story, who did not blame himself for it: he transformed the trauma into a creative spark and the result, at some time, has made us think.