The pandemic is underlining something that almost all of us have known for many years: the strategic part of having a food production system that is as robust as possible, something that we have never achieved.

In recent years, Cuba has had to face a group of unforeseen events that could exceed anyone’s imagination.

The unfortunate fall of a Cubana de Aviación plane in May 2018 at takeoff with the consequent loss of life and the immense pain it caused; the assumption of an administration in the United States that has broken all records of persecution against Cuba; an accelerated right-wing process in Latin America and the tenacious effort of the Lima Group to return the continent to its worst years of submission to the interests of the United States.

The coup d’état against Dilma Rousseff in Brazil, Lenín Moreno’s betrayal in Ecuador, the most recent coup against Evo Morales in Bolivia. Those three processes brought with them the end of the various medical missions in those three countries, with the consequent economic effects for Cuba.

Let’s add to the above having inherited a bulky external debt, both the contracted and the one restructured with the Paris Club, as well as the other contracted with suppliers, a great deal of which has not been honored, decisive in supplying the Cuban market and that together with the persecution of OFAC increases the country’s risk and financial costs of any commercial or credit operation that Cuba tries to carry out.

If all this were not enough, three natural disasters have made the country’s management more complicated: the unusual tornado that devastated neighborhoods in Havana; a very harsh drought, even more severe in the capital of the Republic where a fifth of the country’s population lives; and now the COVID-19 pandemic that has accelerated the crisis in the world economy and is generating serious uncertainties about its duration and the speed of recovery on a global scale. A part of these are exogenous factors.

Today the priority is, has to be, and has thus been, to face this pandemic, reduce the possibility of contagion, and prevent and avoid the greatest number of deaths.

The pandemic is underlining something that almost all of us have known for many years: the strategic part of having a food production system that is as robust as possible, something that we have never achieved.

In Cuba there are 22 ministries involved in drawing up a food security and nutritional education plan, that is, practically all of them. This was stated by Minister Rodríguez Royero at a Mesa Redonda television program. How good that it is so, how good that this Plan is being discussed in April and much better that it be approved as soon as possible and also put into practice as soon as possible.

In any case, the truth is that a vision of this from the furrow to the table system does not seem to exist in the country.

Even today, despite the efforts and the wear and tear of dozens of meetings, there are too many organizations between the furrow and the table that chop to pieces the system and many times the regulations that each one dictates go head-on with others and all of them contribute to the fact that the resources put into food production do not give the expected results.

It is true that in 1985/86 we still had the help of the USSR and that oil, raw materials, and fertilizers and pesticides were abundant in all the warehouses in our country, but this is one more incentive to carry out this food security program.

It is also true that this production did not fill our markets either, it did not make us less food importers and it did not free us from the uncertainty of supply. [1]

But the improvement is not enough. We are more Cubans, the population grew, the country has less money to import and the prices of imported products are much higher.

There sure are incentives to develop a powerful food production program that covers everything from the furrow to the table.

The reduction in the production of vegetables in the last three years somehow questions the effectiveness of the approved policies.

Perhaps the most sensitive of all is the production of meat, eggs and milk.

Today, when we are facing an exceptional situation in Cuba and in the world, the line to buy chicken is the longest and is probably the most difficult to organize.

While pork remains almost the only meat that the Cuban population can consume and its prices have risen sharply in the so-called supply and demand markets.

Cattle deliveries to slaughter increased by more than 80,000 heads between the referred years and the average weight has not been able to reach 400 kilograms in any of those years from 2013 to 2018.

For pigs, which at the time was a revolution in the concept of how to increase meat production, statistics show that:

Cuba does not produce significant amounts of chicken. Only 369 tons.

According to the FAO, a tendency toward the hike in meat prices in its different variants should be expected for this year. 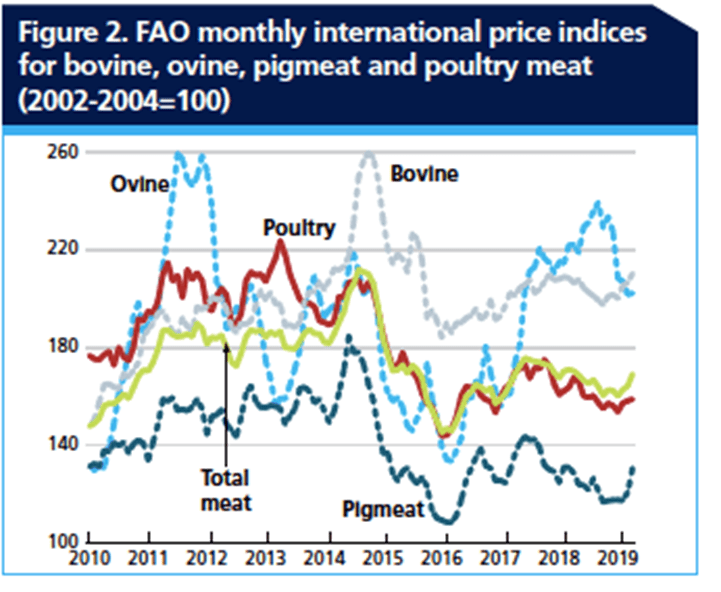 The drop in pork production in China will force that country to increase its meat purchases, which should have an upward impact on meat prices by 2020. It does not seem likely that this scenario will change. So “producing meat” (chicken, beef, pork) is even more necessary.

I again use chicken production as an example.

In 2018 Cuba imported 279,846 tons of chicken for a value of 304,888 million dollars. Many years ago we spent money on chicken that could stay at home if the approval of foreign investment projects for the production of chicken meat had been completed in a timely manner.

It’s not worth looking for culprits, it is necessary to find the causes. Because the interesting thing about situations like this is that we all, all of us, agree that producing chicken meat is a way of import substitution, contributes to reducing food dependency and has the capacity to generate productive chains, forward, through the processing of all by-products and, backwards, as a demand for food and various services, making it also a generator of productive employment.

And I speak of foreign investment, but it is also possible to do it with national state capital. You just have to change the allocation of investment resources.

In the case of pork, the Achilles’ heel is logically in feed and medicine. Without feed today we won’t have pork in four months. The interesting thing is that with a ton of pork meat it is possible to produce five tons of different meat products, so investing in the production of pork, in the conditions for its increase, ensure that program that allowed substantial increases in production through cooperation between the state sector and the private sector, it is essential.

Cuba spends more than 500 million on the import of raw materials for animal feed and concentrates (more than 200 million on corn alone). The possibility of domestically producing a part of the animal feed that we import is essential, it will be necessary to generate sufficient incentives for it.

It is very good news that investments in agriculture have grown by 12% in recent years and that in 2020, 900 million investments will be reached as compared to 500 million in 2019. It would be even better if the results accompany that effort.

From the furrow to the table, we must rethink that path in depth. Remove obstacles and obstacle-makers. And above all, assess the results of the policies adopted to correct in time what doesn’t work.

[1] Unless specified, all data comes from the 2018 Statistical Yearbook of Cuba, 2019 edition.