The island’s Ministry of Public Health report specifies that until the closing of this Tuesday, 10 persons were in critical condition, while the number of people in serious condition rose to six. 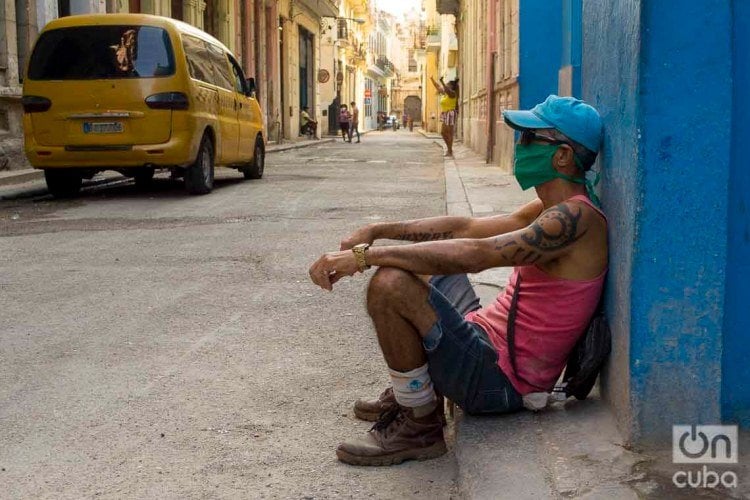 A man sitting on a sidewalk in Havana, with a facemask as a measure of protection against the coronavirus pandemic. Photo: Otmaro Rodríguez.

This Tuesday Cuba registered a record number of new infections with the SARS-CoV-2 coronavirus, with 61, thus the number of confirmed cases on the island reached 457. In addition, the island’s Ministry of Public Health (MINSAP) announced a new death, the twelfth in the country.

Cuban Minister of Health Dr. José Ángel Portal reported this Wednesday at a press conference that 1,187 diagnostic tests (PCR) were performed this Tuesday, which confirmed 60 Cubans and a foreigner, from China, as positive, who had been in contact with a previous confirmed case in the Mariel Special Development Zone.

Of these, five have a source of infection abroad (Panama and Mexico 2 each, Nicaragua 1), 42 were contacts of confirmed cases, 13 maintained contact with travelers from abroad, and the source of infection of one is still being investigated, according to the daily report issued by MINSAP.

Portal affirmed that this “increase was expected” by the authorities due to the number of people who are isolated because they are suspects or contacts of suspects who are being tested, but alerted the population about increasing responsibility and the perception of risk to stop possible chains of transmission due to the existence of six cases that have not been able to determine the source of infection.

In addition, he confirmed that six cases of local transmission of the disease have been detected in communities of Matanzas, Pinar del Río (Consolación del Sur), Havana (El Carmelo People’s Council, in El Vedado), Ciego de Ávila (Florencia), Camagüey (Florida) and Holguín (Gibara), which is why the Island left the pre-epidemic phase behind to enter the limited local transmission phase.

The MINSAP report specified that until the closing of Tuesday, 10 people were in critical condition, while the number of people in serious condition rose to six. The remaining 400 patients who remain hospitalized maintain a stable evolution.

A total of 1,732 patients are hospitalized, of them 1,601 suspects, while more than 9,414 are monitored at home through the Primary Health Care system.

Regarding all the confirmed cases on the island to date, the minister explained that 422 are Cuban and 35 are foreigners, and that 52.7% are male. The most affected age range is 55-59 years, with 11.4% of those infected, followed by 45-49 years with 10%, while in general 60% of those confirmed are between 25 and 59 years, so he warned that “the entire population is exposed.”

Portal also reported that 25 members of the island’s health personnel have tested positive for the coronavirus that causes COVID-19, including 14 doctors, eight nurses, two technicians and an ambulance driver. He explained that some of them were infected outside their work in hospitals, others from the management of patients without symptoms of the disease, while a third group did so through the violation of established safety standards, although they did not specify data in this regard.

The minister commented that all the infected health workers have already been reported within the daily reports, and that only one doctor is in critical condition. In addition, he referred to two cases of contagion in the Calixto García and Manuel Fajardo hospitals in Havana, in which, from a previously unidentified index source, a group of people have tested positive.

Portal said that this is reason why the corresponding studies had been carried out and a group of measures taken, including the isolation of contacts and suspects. It is the first time that the Cuban authorities publicly refer to both events, about which testimonies and comments had already been posted on social networks.