The salary increase measures surpass that repeated argument that always reminded us of the dilemma of what came first. 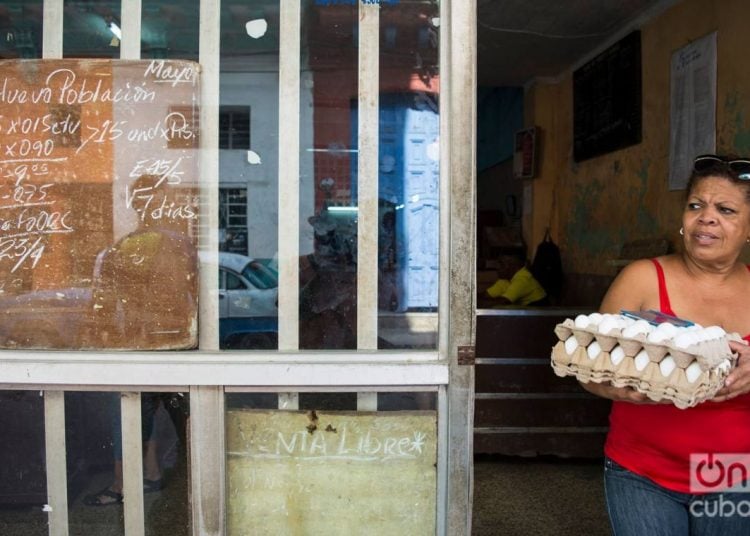 Wage increases can only be possible if work productivity can be increased. This idea, repeated over and over again for several years, has been one of the essential arguments for postponing what a decisive part of all Cubans has needed.

Maintaining low wages in general, but especially in the budgeted sector, has been one of the reasons for many public employees’ emigration to other sectors. Even though the love for the profession and commitment can be great and weigh tremendously, daily life, and the multiple of needs these Cubans have had to face, has also been a factor of great weight in making that decision to “emigrate” towards better paid sectors or “emigrate” to other places with better salary offers for the degree of qualification of those Cubans. The example that I have closest at hand is that of the high rate of emigration of university professors to some countries of “our south.”

A recent work by Pedro Monreal published on his blog saves me a part of what I had structured for this article, but there are always issues to deal with this controversial issue of wages, demand and prices versus productivity, efficiency and growth.

First a bit of history:

For decades, wages were the main, and almost the only, income of Cuban workers. The salary differences were also barely significant and had little influence on Cuban wage earners’ standard of living and access to goods and services. A system of rationed food distribution and highly subsidized prices of goods and services, as well as multiple gratuities (many of them without justification of any kind) conditioned that situation.

That changed drastically in the late 1980s and early 1990s. Then, an adjustment program, certainly unorthodox, used the anchorage of the nominal wage as one of its main resources, while the existence of a network of stores in dollars triggered the prices of many “necessary” goods and the black market expanded, contributing even more to the deterioration of the “real wage” of the Cuban working class.

The rest is known and shared history. Remittances appeared and introduced a new quality in everyday life, whose double or triple role has been one of the most discussed issues in Cuba. As a survival resource, it was a factor in the differentiation of income and access to goods and services; at the same time, it boosted consumer demand and was also a source of private investment.

The little capacity of the Cuban productive system to convert these monies into “national production” is also known history. It has to do with the so-called “importing syndrome” that some argue is in our “genes” and others defend that it is fundamentally a problem of wrong incentives and incoherent “rules of the game” with the purpose of producing more and better.

Today the wage increase measures adopted by the government reduce to smithereens that repeated argument that always reminded us of the dilemma of the “egg and the hen”―which came first?―and also that other never ending “repeating game.” What the government has shown is first to have the political will to do something very risky, but very necessary; and second, to demonstrate and explain that it has found “small loopholes” that allow us to do something that had to be done a long time ago. In short, these loopholes have to do with a better allocation of budget spending.

The other thing the government has proven is the need to take risks. And watch out, taking risks is not the same as being suicidal. The government’s “political will to do” has existed, along with the deep conviction that it is not enough. And while it is true that it is very important to urge all citizens to put the country’s interests first, it is also true that the economy has its own laws and therefore we must do beyond the impossible to act without denying them.

I discover nothing if I affirm that our fundamental problem is a large supply deficit combined with an expenditure structure where Cuban families barely have to “spend” on housing (I’m referring to rents and home rents) or on health and education. While in other countries these three are the main destinations of household spending and therefore don’t go to consumption of goods, in Cuba it is radically different. Therefore, that more than 7 billion increase in income will go mainly to consumption and mainly to food consumption, both to increase quantities and improve qualities.

Accepting that price control can be effective for a while, but knowing that economic history shows again and again that it is ineffective in the long term, and generally, also generates more problems in the long term than it solves, then the supply response is decisive. We also know that supply has two components, domestic production and imports. It is also known by all that in Cuba’s current conditions imports can’t be increased by a significant amount.

How to absorb this increase in demand and avoid an inflationary process?

The long-term solutions are essentially on the side of the increase in national production, however, it isn’t possible to wait for the “long term.” Pedro Monreal, based on the work of Betsy Anaya and Anicia García, found that a figure of 100 million dollars is the necessary amount of money to achieve a significant increase in supply and proposed a group of alternatives to find those 100 million, fundamentally by improving the budget allocation. Undoubtedly, it is a very useful exercise that I imagine has already been carried out by the Cuban authorities.

Another “source” of increased supply in the short term could be in the restructuring of imports “our” chain of stores make.

Maintaining the global figure of imports of consumer goods, it would be possible to change the structure of these imports and direct them towards those products on which an important part of the new demand will foreseeably fall.

In “our” chain of stores, it is quite common to see very sophisticated products and a very concentrated demand in high income segments, with prices that are scary. Is it not possible that those “responsible” for making these purchases take into account this new situation and find cheaper and common food products, of those that a part of our people could buy with these new increases? It is a well-known business philosophy of retail trade, earning more by volume than by price, something that apparently does not enjoy many followers in “our” chain of stores.

You also have to encourage saving. Even though the marginal and average propensity to consume is very high, there is no reason to not generate better savings plans that encourage people and families whose income is increased to save a part of this increase. It is true that a great deal of those who will receive increases won’t think twice about opening savings accounts, but there is no reason not to try. It is also an opportunity to be more proactive.

But there is no doubt that the main thing is to encourage production. “Defending the national industry” is something that has been said again and again. A part of the announced measures are steered in that direction, especially one that puts in the hands of the directors of enterprises the possibility of distributing up to five monthly salaries based on profits and also those others that will allow the enterprises that export or are related to the Mariel Special Development Zone to retain part of these revenues in dollars and use them to guarantee these productions, or that other measure that will allow some enterprises to have some flexibility to import certain products. All this can contribute to this long-awaited increase in supply from “national production.”

It is also important to understand that the “national industry” goes beyond the state sector. Much can be contributed from the small to generate absorption capacity for this increase in demand. No doubt here the local governments’ ability to mobilize, encourage, promote these producers (of goods and services) is essential. To add must be the order of the day.

How much can the farmer sector contribute, especially the private and cooperative sector, responsible for more than 80% of agricultural food production? Perhaps here we should also review the incentives.

The coherence between all the measures and the purposes contained in the country vision will be decisive, as well as consistency over time.

It is also true that, as the minister of economy says, the money that is used for one thing can’t be used for another―it is what we call a rival good in economics―and therefore, if we don’t buy CEPERA guava shells (6.15 CUC the can in the store) in order to use that money in the promotion of the national production of “guava shells” and in the end we aren’t able to produce them, well then neither national nor imported shells will be available. In any case, it’s worth the risk.