In this short series I will dwell on three vertices of a triangle; in their interaction, but also in their own dynamics: the opposition, the U.S. factor and the policy of the Cuban government. 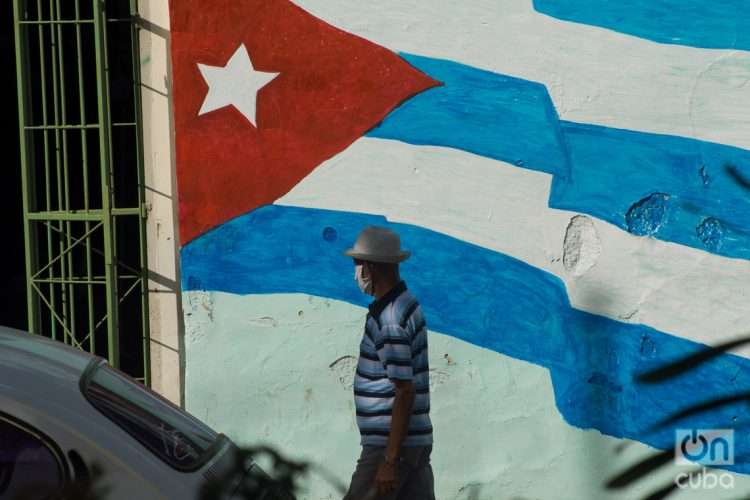 The March for Change and its ups and downs have made the spectrum of ideas more visible in today’s Cuban society. It reflects a civic awareness of common sense, with borders and nuances that were already there. As is typical in many other places, Cuban common sense personalizes and sentimentalizes political phenomena, aligns itself in front of them, qualifying or disqualifying them, approving them or not, labelling them, although not necessarily understanding them.

On the borders of this spectrum, there are antinomies that mark the Cuban political situation. By referring to them I only seek to illustrate the complexities of our consensus, without attempting to portray here “what the majority think,” for which an investigation would be necessary.

That common sense knows the weight of the blockade in national life, and knows that the United States has always supported the opposition. But these certainties tend to blur, especially due to their constant use in official speeches as keys to almost everything.

Common sense also supports law and order as essential. But the very civic culture fostered by socialism makes it perceive violence, even against those who break the law, as an abuse of power.

Even though it has historically disapproved of the methods of that opposition and its ultimate goals, it does not necessarily consider everything it says false or disagrees with everything it proposes.

Even sharing the ultimate principles and objectives of socialism, it disagrees with some of the methods and reasons on which the State bases its policies.

It knows that security is a fundamental national interest. But when that notion is invoked to deal with eminently political problems, it doubts its efficacy.

These antinomies are nothing new. Some observers have recorded them, in addition to others. But many times they only position themselves before them, and leave intact the underlying problems that distinguish the current political situation. Its criticism thus remains within the box of the same common sense, especially when it is limited to giving its opinion and advising the government or the opposition on “what it should do.”

An analysis that goes beyond that opinion and advisory role would have to coldly analyze the implications of current and alternative policies, without detaching from the specific context of these problems, here and now. Doing so would help to gain clarity, and perhaps to foster a civic awareness of good sense, as Antonio Gramsci would say.

What follows attempts to sketch a map of that political situation, with the sole intention of facilitating analysis and fostering debate. In this short series I will dwell on three vertices of a triangle; in their interaction, but also in their own dynamics: the opposition, the U.S. factor and the policy of the Cuban government.

The main structural weaknesses of the opposition, over time, have been three: divisions between groups; the absence of leaders with experience and political capacity; convergence with U.S. hostility.

The armed organizations of the 1960s, especially the anti-communist dissidents within those who opposed the Batista dictatorship, including the Catholic Youth, comprised tens of thousands of active militants, willing to follow them and face the costs of the struggle. It is not the case of the current ones. Although its resonance in digital networks and the media contributes to oversizing them, the ability of this leadership to mobilize active members and to lead coherent policies is much less effective.

Unlike the opposition in other countries, this leadership has not held positions of representation in broader organizations, or in government functions, which provide it with a real notion about political problems and the exercise of power. Those opponents who were cadres of the State, the organizations of the system, the organs of Security, or the Party apparatus do not stand out in the leadership, and even less in the last generation opposition.

Apart from the opportunists and adventurers who exercise dissent as a way of life, most of its leaders with an intellectual level and a real political conscience are academicians, journalists, artists, writers, even former professors of Marxism, who one day decided to declare themselves activists for the anti-government cause. They are political book animals, who to learn how to combat the system do 100-hour seminars on the works of Hanna Arendt, and things like that. In general, the organic intellectuals of the opposition, who represent the “Party-State” as a bloc, do not understand much about the political dynamics, nor do they believe that it is worth wasting time seeking dialogue or negotiation.

By raising the essential unpopularity and repressive condition of the system as banners of struggle, the majority of that leadership convinces itself of the ineptitude of the State to regenerate consensus with the resources at its disposal. They do not notice that, in addition to the means of force to confront subversion, that State has political capital beyond ideology, essentially political mechanisms to neutralize their maneuvers, even if they are more creative and sophisticated, as now.

It has been a basic strategic error of the opposition not to understand that the use of force, in any degree and modality (including “non-violent”), has triggered the alarm of national security, with counterproductive effects for its purposes of breaking the consensus and legitimizing itself as a viable option.

Taking advantage of an uncertain economic situation and the deterioration of the consensus to fight with the government, try to extract concessions from it, and capitalize on them to increase their ranks, not only affects political polarization. That fight also contradicts in its own terms the call for dialogue, reconciliation, national unity, the search for peace, etc., but above all it fuels a volatile situation. In this particular circumstance, the government is much less likely to react with the same reflexes of dialogue and conciliation as in the face of other social, and even political, demands.

As is known, a situation of instability and its consequences would be more threatening than any economic crisis, not only for the system, but also for society and the national interest, beyond ideological differences.

On the other hand, even if not bordering on a political crisis that really threatens the control of power, the impression that the situation that is getting out of hand is already risky enough. Indeed, the mere perception that the opposition is wrenching concessions under pressure can be interpreted as an inability to deal with the ongoing crisis. It is not possible to ignore that it is about dialogue with an opposition that, under the banners of peace and understanding, demands pluralism with the sectors furthest from dialogue, those of the hardline exiles and their sponsors par excellence.

The evolution of the Cuban situation in recent years suggests that the banner of reconciliation is a beautiful idea, but that when it is taken to the extreme it is the dream of voluntarist reason. Calling for an unlimited national dialogue turns out to be, at best, a utopian project. A viable and sustainable republic based on the coexistence of old and new opponents with veteran communists and the new left, militants of the anti-communist youth and possible socialism, the Americans Díaz-Balart and Marco Rubio and the deputies to the National Assembly, the voters of Coral Gables and those of Mantilla, it is unlikely, no matter how many phrases of Martí are pronounced to invoke it.

Ultimately, with that seven-headed interlocutor, a key requirement of negotiation is not met: confidence in what the other will do.

The political culture of this opposition is illustrated in what it understands by human rights. Axioms such as that genuine freedom of expression is in an American-style, that the street demonstration is the quintessence of political participation, that having a plebiscite is the full form of democracy, that the only autonomy of the judiciary is the one that corresponds to “the separation of powers,” that democracy is equivalent to a party system such as those prevailing in the Western Hemisphere, that political freedom entails registration of all types of organizations regardless of their ideology, or that an artistic freedom without borders is the measure of civic culture of a society, portray it.

Among the dissidents I have met (some very close), there are those who were fed up with the liturgies of real socialism, suffered the effect of sectarian or extremist policies, lost faith when the Wall collapsed, and went into inside exile or exile abroad, or never came to identify with a system such as that experienced since the Special Period, nor were they motivated by the rhetoric that saturates the Cuban press and television. They were no longer interested in changing things, and decided to hang up their gloves; or they never tried. There are also those with merits to appear in a universal history of opportunism.

Could the case of Yunior García mean something different within the leadership of these groups? How is it explained that, in just a few months, he went from dissent to dissident? Has having maintained a dialogue within the system conferred greater legitimacy on his civic march? Not coming from the organized opposition give him greater credibility? What do the zigzags of the project and its outcome reveal?

Examining that policy goes beyond this brief space. As well as understanding the U.S. factor. Do its policies towards Cuba respond to its commitment to the opponents? To the promise made to “freedom fighters,” from 1960 to 2021? Is it that the compass of the national security organs that have always guided relations with Cuba is driven by the Miami magnet? What mystery would explain that in politics towards Cuba, such a tail could move a dog like that?

Finally, is it that Cuban policy towards the United States, and its willingness to resume normalization, may now depend on its perception of threat towards this opposition and its allies? What other lessons and experiences are derived from that policy?

I would say that this load of problems is already a lot for a first round.