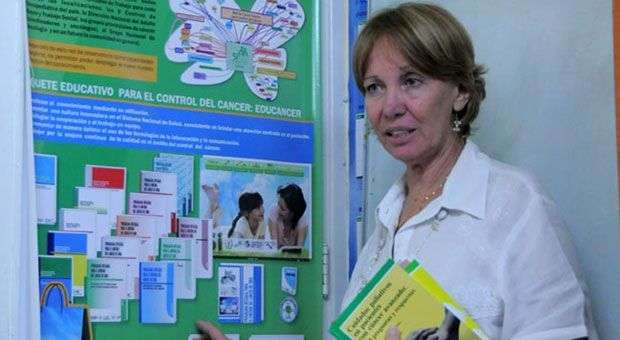 Cancer in Cuba has generated much talk this year: in the last quarter it was announced the registration of Racotumomab (Vaxira), second vaccine against lung cancer, the result of the work of the Centre

Molecular Immunology (CIM); it was announced the development in the laboratory of a promising new drug by Labiofam that, unlike cytostatic drugs attack malignant cells only (one antitumor peptide) and we learned that the above condition has surpassed cardiovascular diseases as the first cause of death in our country, accounting for 25% of all deaths.

The latter information could be generating even some concern, from concluding that it is a growing evil, and it seems contradictory to bind it with both news above which are unquestionably positive.

However, if we analyze all the factors that influence the hierarchical displacement of the cause of mortality (more associated with a rise in the control of cardiovascular disease, than of cancer deaths) and if we value the strengths of our biotechnology industry, we would be relieved to understand that we are not against an irrepressible aggression from nature.

This was reaffirmed to OnCuba by doctor Teresa Romero, Head of the Independent Section of Cancer Control, Ministry of Public Health, who received us in her office to share with our readers the realities and perspectives of this disease in Cuba, beyond all scaremongering.

TR: “Cuba has been preparing for these times for a long while.  That cancer is the leading cause of death is a problem for public health and happiness, because health is well-being; but this does not prevent it from being controlled. In fact, it has begun to show a negative sign in its tendency, although weak (-0.04 decrease), and that trend has been systematized in recent times.

“Every day we are able to diagnose earlier to cure what is curable and what is not, and treat it as a chronic long survival disease as we do with diabetes, hypertension … This is to what Dr. Agustín Lage, director of CIM, termed as a paradigm shift in cancer control in Cuba.

“We are beginning to use many drugs that are not as aggressive to life of patient, associated with immunotherapy, and conducted trials of biotechnology products in many polyclinics, as part of multi-year research. What we can say today is that they allow controlled monitoring, and improved quality of life and age distension of the death of the patient.

“The news that this moved to be the leading cause of death in Cuba came as no surprise. We knew how likely it was because there was a sustained and systematic trend of decreasing mortality from cardiovascular diseases, always negative and of greater magnitude, compared with cancer. The latter had slight decreases – for example, in 2011 – and has not always been sustained.

“It definitely happened at the end of last year because there was a very good work in the control of risk factors linked to the cardiovascular diseases such as hypertension, salt consumption, among others.”

OF THE WHOLE, THE PRIORITIES

The working group led by Dr. Romero, gathers since 2006 experiences and knowledge to be integrated into the National Cancer Control program, which, “as a recipe book,” typifies the modes of action against each of the manifestations of the disease, “it is aiming at binding drugs and therapeutic and social alternatives “.

Before delving into the objectives and areas of work of the program, the specialist makes an important conceptual distinction:

TR: “Cancer is a group of disorders with 203 epidemiological dissimilar patterns; some are related to infectious diseases – for example, cervical cancer, directly related to the human papillomavirus

(STD) -, and others are linked to the genetic inheritance, environmental factors or risk, as smoking. Therefore, the various professionals that study cancer and deal with it as a matter of interest public health should have a very broad and polychromatic approach. We cannot look to it through a single prism.

“Within this framework of more than 200 locations, the actual public health problem focuses on a small group of highest incidence that meets the 85% of the total mortality. These are lung, female breast (this is also evident in the man, but is not a public health problem to be few cases), prostate, cervix and colon cancers.

“There are others such as gastric cancer, laryngeal and some leukemias that have appeared with certain regularity but they still do not fall within the above group.

“Without ignoring the rest, the Cuban cancer control program prioritizes locations that cause public health problems that affect a majority – the five specified above -, the age of onset in children and young, and of the skin, although it is not cause of death, it has a high incidence in our country (it is said that sun exposure is cumulatively harmful, and there is little protection culture in this sense).”

The head of the Independent Section Cancer Control addresses the working lines of the program she leads.

“To talk about prevention, we should start by acknowledging the existence of a mesh of causal relationships not well known despite been studied, some we have managed to clarify better than others. In the case of tobacco, is well determined that 87% of Cuban cancer cases is linked to active or passive consumption. On diets, however, there is a more diffuse on the causal relationship.

“The program takes that knowledge and organizes for each type medical and professional performance. If we are working groups at risk, for example, it describes the factors most associated to it and protective behaviors.

“As we proceed in terms of early diagnosis, since whatever is caught early has a better prognosis. Here come the inquiries we make to the population: Pap smear for cervical cancer, physical examination for oral and skin cancer, educational (BSE) and clinical method for breast cancer, and every suspect PSA prostate cancer or men who reached 50 and wants a medical exam, for which they are SUM equipment installed throughout the country.

“Right now is starting in some municipalities the research for the detection of human blood occult in feces, testing directed primarily to early diagnosis of colon cancer?

“In terms of treatment, the Program has organized everything concerning medical oncology (cytostatics), surgical oncology, radiotherapy and nuclear medicine. Further including immunology, as

Cuba has the strength to have a strong development in biotechnology, with an important component of research and development in this area. This has given us the therapeutic vaccines for lung cancer, the monoclonal and, finally, we are developing other molecules that have been released by their manufacturers, in terms of reducing treatment costs and substitute imports. “

Before completing our discussion, Dr. Teresa Romero made us reflect on the relationship between cancer and aging, which seems be an ambivalence between the variable that represents a risk and the “threatened”: with age increases the chances of cancer and, simultaneously, if not properly treated, the suffering of cancer affects the possibility of aging.

TR: “There are two factors that have a primary impact for cancer to be the leading cause of death: the aforementioned smoking and aging. The first is modifiable, the second is not.

“Studies have shown, by province, the link between aging population and incidence of cancer: where the population is more aged there is also an increased occurrence of this disease, but not necessarily increased mortality.

“In fact, there are less aged provinces with the highest mortality on this cause. Such figure shows a social determinant of efficiency reserves in the prevention, detection and treatment of cancer. If the health system is well organized at territorial level, the person doesn’t die.

“Furthermore, in the control of cancer is included the possibility to keep our life expectancy at 78 years or increase it. The Infant mortality continues to play a role in the calculation of this indicator, but that in Cuba goes well. The focal point is on the number of years lost to cancer (about 18). That social macro objective requires that we work very well and integrally in controlling the disease.