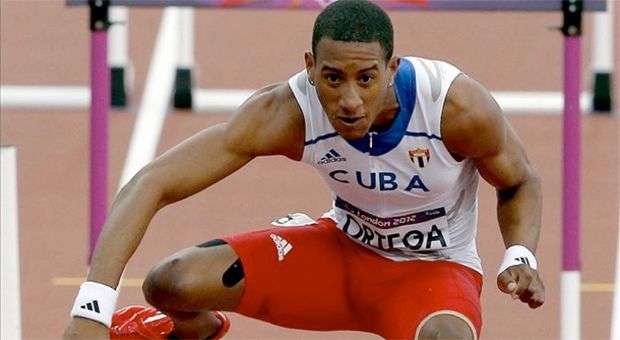 The Cuban delegation that participated in the recent World Athletics Championships returned without one of its members, the hurdler Orlando Ortega, according to the official confirmation released the National Federation of the discipline.

Therefore, from now, the 2013 is named as “Year of hardships for Cuban hurdles,” at least for those who want our best runners, beyond their thinking or philosophy, to defend the jersey of the four letters on the world of athletics.

The denomination is founded and facts are there to prove it. First the former world record holder, Dayron Robles, reappeared on the international tracks racing under no flag, after having requested his dismissal from the national team.

Robles ran in several meetings, and his times fell progressively and he signed for French club AS Monaco, for which he will run in the near future, because to compete for any nation he must wait two years after separating from the Cuban Federation.

Thus, after the statement exchanges between Robles and Alberto Juantorena, president of the Cuban athletic institution, almost all of us waive him from seeing him race for Cuba, although there may be a tiny, tiny, tinypossibility.

Now, as a domino effect, we lose Orlando Ortega, who had not yet attained mastery of Dayron, but had sufficient credentials to be established in the hurdles’ elite.

Ortega was banned by the Cuban Federation last July for not attending a competition in Europe, but the entity lifted the punishment before the World Cup, where he ran out of pace, accusing almost a month without being on the tracks.

In his qualifying heat in Moscow he crossed the finish sixth, unfortunate action that made all the media agreed he should return home, but he had other plans and left the delegation, perhaps to take a similar path to Dayron.

Most truth of the matter, the palpable reality is that Cuban short hurdles, after more than a decade in the universal elite we will live a nightmare in this Olympic cycle, at least until they can forge new specialists.

My Little world in 3D