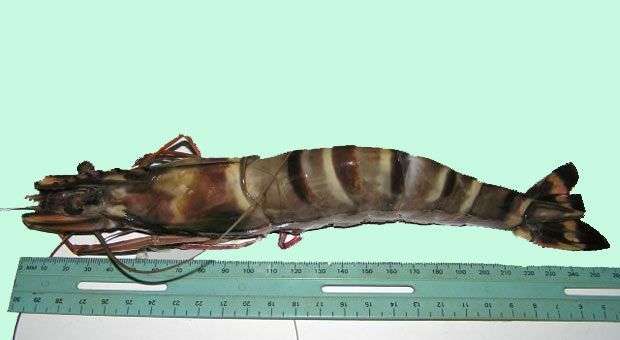 The presence of a new species of shrimp in the Cuban insular shelf triggers expectations of scientists, fishermen and … cooks.

This is the giant tiger shrimp (Penaeus monodon or) of which several specimens have been captured in the Bay of Cienfuegos and the Jardines del Rey, south of Ciego de Ávila and Camagüey provinces.

The news aroused adrenaline among researchers of the Environmental Studies Center (CEAC) of the Cuban province of Cienfuegos, who last June received several shrimps caught by local fishermen.

Since then, they support the hypothesis that it is the so-called jumbo shrimp, and preserved in formalin a specimen of 27 cm length and 135 grams of weight.

Such size far exceeds the records obtained by the pink shrimp (typical of the south) or grown in industrial farms.

According to Elizabeth Alvarez, ECAC communication specialist, the appearance of the giant tiger shrimp (one marine crustacean widely bred for food and originally from the Indian and Pacific oceans) adds to the growing influx of exotic species into the waters of Cuba.

Specifically in the Bay of Cienfuegos since 2005 they recorded the introduction of Green Mussel (Perna viridis) as causing serious problems since they obstructed the entrance channel for cooling water in the local thermoelectric plant.

The following year confirmed the arrival of another mollusk (Mytilopsis sallei) with no apparent consequences for the environment, and in 2008 confirmed the existence in the area of Lionfish (Pterois volitans) an event that caused a media stir by alleged dangers for swimmers….

Each time a new species arrive, scientists are studying the possible impact to other populations and then analyze their economic potential. For example, they are looking opportunities of the Green Mussel in preparing cocktails and the culinary potential of lionfish.

At that point they are with the Giant tiger, since literature states that individuals of both sexes may reach 36 cm in length, and females weigh more than a pound of weight.

That’s why the fishermen (and cooks at ECAC) are salivating, sharpened knives with the news of the discovery … “you can imagine!”  Elizabeth said, “with two of those will make a good yellow rice! “