"We must continue working on the aspects that were missing to get to next year in the best shape," said the Cuban jumper after the Doha World Championship finals, where he finished third and in which the Jamaican Tajay Gayle won. 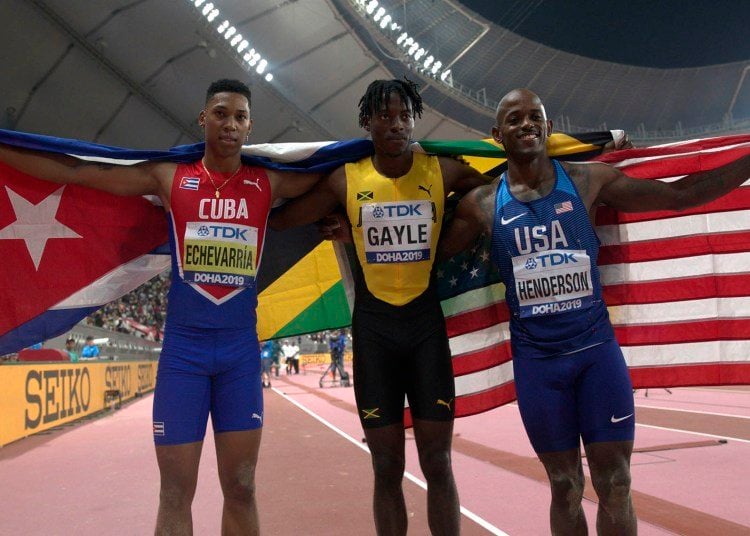 Cuban Juan Miguel Echevarría acknowledged that he is “not happy at all” despite having won his first long-jump open-air medal in the Doha World Championship, but he advanced that he’s already working to correct mistakes.

“We are still fighting,” he said after finishing in the―surprising for many―third place in the finals with a mark of 8.34.

“I’m not happy at all, but we must continue working on the aspects that were missing to get to next year in the best shape,” he said after the competition, in which Jamaican Tajay Gayle won with 8.69.

With that mark, the best of his career, the new world champion precisely snatched from Echevarría the tenth place in the world all-time list.

The Cuban highlighted the remarkable level of long jump today.

“There’s a lot of talent, young people and veterans Jeff Henderson (second in Doha with 8.39) and Luvo Manyonga, who are great competitors, are sill with us,” said the athlete who for many is the most promising figure of his specialty in the world.

On the difference between Friday’s classification, where he jumped 8.40 in a single attempt, and the finals, in which several athletes exceeded the 8.00-meter barrier, Echevarría acknowledged that “it isn’t that I was more pressured” this Saturday, but that “the competition was different.”

“Nothing special happened. The main problem was that I was falling behind in the table and that was what they were rectifying me again and again,” he assured the Jit digital site about his coach Daniel Osorio’s indications from the stands.

When taking stock of his season, he pointed out that “it has been quite difficult” due to the physical problems he has had, but he affirmed that he got to the World Championship “in good shape.”

Regarding his bronze medal, he said that “it is a medal for my country and that they know that I tried to give the best show,” and he dedicated it to his family―especially his mother, “may God have her where he has her”―, friends and “all those who have supported me.”

“To all of them I say that we are here, that we are still fighting,” he said, with his sights set on the 2020 Tokyo Olympics.