The first baseman became the fifth Chicago White Sox player, and the sixth Cuban in history, with 200 home runs in MLB. 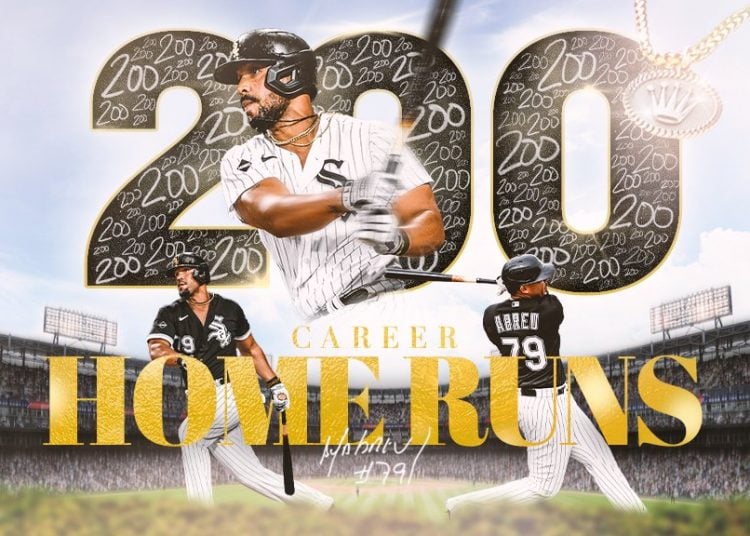 This Tuesday, April 6, a slider by pitcher Keynan Middleton was transformed into a rocket that shot 104.9 miles and traveled 404 feet until it was lost in the Seattle night, where slugger José Abreu entered history as the sixth Cuban with 200 home runs in the Major Leagues.

There was a full house and the game was at a standstill (6-3) at T-Mobile Park, the perfect circumstances for the “Mal Tiempo phenomenon” to enter the scene and lead the Chicago White Sox to another victory, the third of the current year and No. 101 in the 182 games Abreu has homered since making his debut in the Major Leagues in 2014.

His 200 homers have come almost exactly seven years since his first full-return hits in the United States, on April 8, 2014, when Chad Bettis and Wilton López were the Cuban victims in Colorado. That day, anyone could think that Abreu was only taking advantage of the benefits of Coors Field, a hitters paradise, but with the passage of time everyone has been able to realize that his power is genuine.

And that's why he's the reigning MVP. pic.twitter.com/Dz2lGvQ2qO

Abreu has been the natural leader of the White Sox, he even won the Most Valuable Player (MVP) of the American League in 2020. But the most important thing is that the Cuban has never lowered the intensity and constantly sets his sights higher up: “I’m not the type of person to settle for just being the MVP. I will continue to work hard. I don’t like to get comfortable. I don’t like feeling like nothing else exists. There’s always more you can do and I’m going for more.”

With that mentality, it would not be too pretentious to think that Abreu, at 34, can perfectly dream of 400 home runs in MLB, a figure that would place him at the gates of Cooperstown, considering that he debuted at 27 years.

Do you think it is impossible? For the skeptics, I remind you that Nelson Cruz, the man who has hit the most home runs since 2014 to date, forged that leadership aged between 33 and 40 years. Abreu is now entering that age like good wine, as evidenced by the fact that he had his last 50 home runs in 204 games.

This detail may not seem significant, but it is. Abreu hit his first 50 home runs in 218 games, his second 50 took 283 duels and delayed the 262 for his third 50. If we look at it from another perspective, the Cienfuegos player needed 501 games for his first 100 homers, and the last 100 have been achieved in 35 fewer games (466). The fact that he has considerably lowered these indicators is proof of his constancy, seriousness and professionalism, determining factors in his aspirations.

But instead of looking to the future, let’s take a look back at the road to the first 200 home runs of the “Mal Tiempo phenomenon.”

José Abreu debuted in the Major Leagues at the age of 27, without passing through the Minors. His irruption was sudden and, despite the fact that he already had a certain sporting maturity, it was an absolute unknown if he would perform in an unknown scenario and qualitatively far superior to everything he had faced.

However, in his debut campaign, the bad vices he could have had from Cuban baseball were hardly noticed and he fully triumphed, to the point of winning the “Rookie of the Year” award. His 36 home runs in 2014 represent the ninth-highest number for rookies in MLB history, a list led by Pete Alonso with his 53 hits in 2019.

As we already mentioned, Abreu’s first victims were Chad Bettis and Wilton López, two not very seasoned pitchers, although later, in that same season, he hit home runs against six men who had won—or subsequently won—the Cy Young Award. as the best pitchers in their respective leagues.

Among those illustrious names, the name of Clayton Kershaw stands out, who allowed very few hits in 2014. That season the Dodgers ace took the second Cy Young of his career, with 21 victories, a 1.77 ERA, Walks and Hits per Inning Pitched (WHIP) of 0.857 and only nine home runs—one of them by Abreu—on June 2 in Los Angeles. The funny thing is that the Cuban had not hit home runs for 18 days and ended his streak against the star southpaw.

Another great pitcher who has felt the power of José Abreu firsthand is Justin Verlander. The two-time Cy Young award winner is the one who has allowed the Cuban the most home runs (six), and in general he’s put in a lot of hard work to dominate him. Since they met for the first time on April 22, 2014, the Cienfuegos player has hit .364/.429/.818 against Verlander, with eight extra-base hits.

Either way, the “Mal Tiempo phenomenon” hasn’t distinguished between stars and average pitchers, or between lefties and righties. In total, Abreu has bounced 148 pitchers’ ball, 35 of whom he has hit more than once. In addition to Verlander—his favorite victim—he has hit five homers to Corey Kluber and four to Kyle Gibson.

By the way, it is striking that he homered off nine Cy Young award-winning pitchers. We already mentioned Kershaw, Verlander and Kluber, but we would have to add Blake Snell, David Price, Rick Porcello, Dallas Keuchel, R.A. Dickey and Shane Bieber.

By teams, logically those who have suffered the most are his divisional rivals Cleveland, the worst off with 24 homers from the Cuban, followed by Detroit (23), Kansas (21) and Minnesota (20). Abreu has homered every team in the American League and the only ones that have escaped his power in MLB are the New York Mets, Atlanta Braves and San Diego Padres.

On average, José Abreu’s home runs have traveled more than 400 feet in each of his MLB seasons, except for 2015, when his average home run distance was 399 feet.

In total, of his 200 home runs in MLB, 121 have gone beyond 400 feet and the award for the longest goes to the one he connected to Cubs southpaw Jon Lester. On July 27, 2017, he dropped a bombshell through the left field that walked 454 feet at Guaranteed Rate Field, and later that same night, he hit a 438-foot Japanese Koji Uehara. Almost 900 feet in a single day!

That was Abreu’s eighth game with more than one homer in MLB, and his second in the 2017 season, when he had the most multi-homer crashes (five) of his career. By the way, the Cuban has managed to hit two home runs in 16 games and in one he bounced three balls, precisely against the Chicago neighbors.

That three-homer game was part of the Cuban’s massacre between August 21 and 23 of last year, when he linked a chain of three consecutive dates with balls over the fence of Wrigley Field. But the most impressive thing about that is that, in the middle of the streak, he had a run of four consecutive home runs against Kyle Hendricks, Rowan Wick, Duane Underwood Jr. and Yu Darvish.

May the fourth be with you

One would have to ask José Abreu if he is a fan of “Star Wars,” but he could perfectly run as an ambassador of the popular film saga among MLB players, because in five different seasons he has hit a home run on May 4, a date recognized as “Star Wars Day.”

In his first season, Abreu hit the ball over the fence on May 4 against Corey Kluber and the Indians. The following year he had no games on that day, but from 2016 to 2019 he never missed his home run appointment on May 4. In 2016 he hit the ball pitched by Clay Buchholz (Boston), in 2017 it was Ian Kennedy (Kansas), in 2018 José Berríos (Minnesota) and in 2019 Tyler Thornburg (Boston).

Due to the pandemic, the 2020 season was delayed until the summer and there were no games in May, so Abreu had no chance to extend his surprising streak. Either way, we will have to be attentive to the upcoming “Star Wars Day,” because the force is definitely with Abreu every May 4th.

José Abreu is the sixth Cuban to reach 200 life-long home runs and the second fastest to reach the mark (967 games), surpassed by José Canseco, who needed only 812 games for the 200 homers.

But in these comparisons, Abreu not only does well among the Cubans. For example, if we focus on the 26 active players who have 200 or more homers, we can see that the Cienfuegos player is the eighth who has needed the least time to reach the figure. The only ones ahead of him are:

It is powerfully striking that several of the most consistent first basemen in recent years also lag behind Abreu in this parameter. Such are the cases of Miguel Cabrera, Paul Goldschmidt, Jay Bruce, Anthony Rizzo, Joey Votto, Freddie Freeman and Ryan Zimmerman, who needed a thousand or more games to get to 200 home runs.

Yet Abreu is ahead of three Hall of Famers, three legends, one from the Yankees, one from Baltimore and one from Houston, in that order. The first is the legendary Lou Gehrig, who reached 200 homers in his ninth season (973 games), followed by Eddie Murray (1,057) and Jeff Bagwell (1,070).

José Abreu has batted in 680 runs in MLB, and more than half have been thanks to his home runs. The Cuban has scored a total of 376 touchdowns (55.3%) just for home runs, which clearly speaks of his ability to bat with men on base.

Of Pito’s 200 homers, 87 have been as teammates in circulation, 52 with runners in scoring position and 72 with two outs. But if those elements are not enough to show that he is a clutch type, I tell you that 65% (130) of his homers have come with a margin of two or fewer runs on the board, including 64 (32%) with an even score.

In addition, he has hit 75 home runs to put his team ahead, 17 to equalize the actions and two to decide (walk-off). The first of this kind was on April 25, 2014, when the White Sox trailed 5-6 to Tampa in the ninth inning, and Abreu hit Grant Balfour’s ball with a full house to seal a spectacular 9-6 victory.

His second walk-off came in July 2019 against Detroit and in extra-innings. At the height of the 12th inning, with the scoreboard 6-6 and two runners on base, the Cuban grabbed an 80-mile change from Nick Ramírez and sent the ball flying to decide.

By the way, that was only the second homer of the “Mal Tiempo phenomenon” in extra innings, after the one he hit in August 2018 against the Yankees, to even the score at three when the Mules were at an out from victory.

Overall, Abreu has hit 73 home runs between the first and third innings, 75 from the fourth to the sixth, and 52 from the seventh onwards.

José Abreu started the 2021 season with a home run at Angels Stadium, thus preserving a very particular tradition: in each of his eight seasons in MLB he has hit the first home run away from home.

In 2014, the Cienfuegos player activated his full-round hitting box at Coors Field in Colorado; in 2015, 2018 and 2019 he chose Kauffman Stadium in Kansas; in 2016 he continued his tour at the Oakland Coliseum; for 2017 he jumped to Comerica Park in Detroit; and in 2020 he started the party that would end with a MVP award at Progressive Field in Cleveland.

Plus, he has gone long periods without missing the ball at Chicago’s Guaranteed Rate Field. For example, between September 2016 and June 2017, he spent 41 games and 177 consecutive plate appearances without being able to hit a home run in his stadium, while in that same period he hit 14 home runs on the road.