ravsberg
in Economy and Business
0 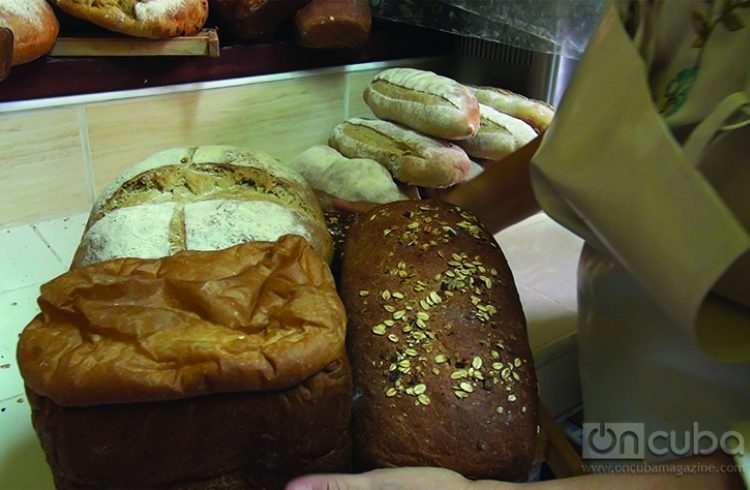 “The idea started here at home. My husband proposed that we make our own bread and we bought a machine, but then after watching Internet videos and looking at PDFs of books by master bakers, we realized that artisan bread making was much better.” Ianeya Borrego is a lawyer, but she found that she has a passion for baking. She enjoys “kneading, watching the dough rise, touching the flour, shaping it.”

Ever since the Raúl Castro government authorized self-employment, individual initiative has skyrocketed, producing thousands of new snack shops, restaurants, construction crews, private taxis and hostels. However, this same opening has also led to a certain saturation of the market and the search for new niches, such as air conditioning cooperatives, home delivery of foods, homemade Italian-style pastries, and Borrego’s nascent artisan bakery.

The bread varieties she makes can’t be found in state bakeries. “We make white bread, with white crumb and a semi-hard crust, the typical, everyday French bread, made with flour, water and salt, and that’s it. Under the same principle, we make whole wheat bread, mixing the flours; black bread, which consists of using white flour and wheat flour and adding bran; raisin bread, because that’s the kind of dried fruit that you can find in Cuba; and milk loaf, which is made the same way but adding milk, so that the crumb is softer.”

The fact that Inaeya’s husband, a well-known Cuban photographer, has access to the Internet, has allowed her to investigate ways of making bread that are unknown in Cuba. “Almost all of these breads are European, and we’ve had friends from those countries taste them. French people who have sampled them have become customers. We’ve had Russian friends try our black bread, and they buy from us every week, too. We make it based on the instructions of a master baker who traveled through Siberia searching for recipies and now teaches those recipes.”

Ianeya’s entire bread-making process is artisan; the machine that the couple bought now stands unused in a corner of the kitchen. “Everything is all-natural. We don’t use any chemical additives, so the bread lasts a week and doesn’t even get moldy. We use olive oil for the whole-wheat bread, which has a very dry dough because the flour is very absorbent. The natural yeast we make with flour, water and salt; it sits for several days until it activates, and that makes ‘living flour.’ We add it to the dough and then ‘feed’ it again to be ready for using the next day. We save a little bit of dough from every type of bread, which we call ‘old dough,’ to mix with the new dough and give the bread a different taste and a durability of seven days.”

The project made slow progress. At first it was just for home consumption, but soon they had to expand, because “after our friends try our bread once, they want us to make it for them, too.” Now Ianeya dreams of “having a bakery. I’m okay at home, considering the amount of bread I make, but I would like to have a place. My dream is to have a small bakery, where people can sit down and have a coffee and try the bread. I think that possibilities are opening up in Cuba for different business forms, whether it’s me alone, or in a cooperative, or associating with an institution.”

But more than permits are needed for moving forward. Ianeya, like other Cuban entrepreneurs, needs the State to ensure regular supplies and a variety of products. “What costs us the most is finding the supplies we need; it’s the most difficult part. The raw materials are never a sure thing; sometimes we look for flour and there isn’t any that day, and two or three days might go by before we find any. Supplies are pretty undependable, and all we have is wheat flour. I can’t make other bread varieties, such as rye. Dried fruit, nuts and seeds are also hard to find, and when you find them, their prices are exorbitant,” Ianeya says.

The solution could lie in the creation of wholesale markets, like what exist in the rest of the world for businesses and the self-employed. “If we had a wholesale market, it would provide some peace of mind. Knowing that I could buy flour and oil in bulk would be fantastic…. That way I would know what kind of flour I’m dealing with, because it’s not always the same; sometimes I have to make five loaves of bread to know whether that particular flour is going to need more or less water, or if it’s heavy-duty or medium flour.”

Some of Ianeya’s relatives have hit the roof about her setting law aside to spend her time kneading dough, but she confesses to us that she has discovered a passion: “I would like to make a living by baking bread, and sharing it with people who like it, with people I know. There’s nothing better than being ‘compañeros’ [coworkers, colleagues, partners, comrades], a word that has its roots in referring to who those who break bread together—compartír el pan.”