by Francys Romero and Duanys Hernández Torres
in Baseball
0 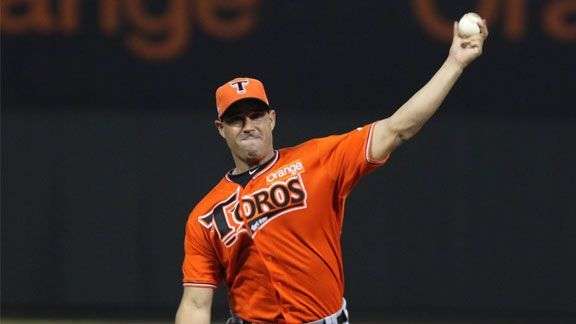 The Cuban pitcher Raul Valdes is indisputably a persistent player. At 37 he remains active with good results and next season will play with the Chunichi Dragons in the Japanese League, the same team that welcomed Omar Linares when he retired from Cuban baseball.

Valdes handed over six seasons in National Series and had a negative balance of 52-58 but achieved an acceptable 3.61 ERA and his opponents only batted for .268. He’s been a strikeout pitcher in every league he has worked. In Cuba he achieved 762 strikeouts and his K / 9 was a formidable 7.17.

He has a record hard to break in Cuban classics. In a Cuban baseball Star Game he struck out six in a row. He is along with Santiago “Changa” Mederos and Yulieski González one of the three lefties who has won 15 games in a season.

Raul Valdes’s career in the United States began in 2004 when he signed a minor league contract with the Chicago Cubs. He spent 9 seasons in the minors and there he had a balance of 36-29 and ERA of 3.80. He destroyed hitters with his K / 9 of 9.29, striking out 596 rivals in 577.2 innings. He also reached a respectable WHIP of 1.24, tools that earned him to be taken into account to jump to the MLB.

After two years absent from baseball (2008 and 2009), Valdes´ perseverance resurfaced and in 2010 he debuted, at 32, in MLB when coach Jerry Daniel gave him the opportunity to join the New York Mets bullpen, after beating the level in the minors.

He played five seasons in MLB (2010-2014) with five teams (Mets and Yankees, Philadelphia Phillies, St. Louis Cardinals and Houston Astros). Although he did not work too much at the highest level (140.1 innings) had even balance of 7-7 with two saves. He kept his strikeout rate and dominated by himself more than a batter per inning (147) for a formidable K / 9 of 9.4.

Raul Valdes was a real baseball globetrotter and pitched in the winter leagues of Venezuela, Dominican Republic and Mexico. In 2010 he won the Caribbean Series as reinforcement of the Escogido Leones to defeat them for the third time the Caracas Leones, whom he had beaten a couple of times as reinforcement of the Magallanes Navegantes in the final of the Venezuelan baseball competition. In that tournament, Valdes worked for 2-0 and 4.09, won the final game and was the leader in strikeouts with 13. A year later the lefty reappeared in the Caribbean Series of Mayagüez 2011 with the Dominican team Toros del Este. There he had balance of 1-0 and his rivals failed in scoring runs when facing him. His perseverance in the game continued, and in 2012 Raul Valdes returned to participate as reinforcement in other Caribbean Series with the Escogido Leones, winning the title again. Valdés won a key game against the Mayagüez Indios and finished with record of 1-0 and 0.00.

There are unknown facts in the persistence of Raul Valdes. He was voted best left-handed pitcher in the Caribbean Series All-Star Team in 2010, 2011 and 2012.

After being released by the Houston Astros in mid-2014, the Toronto Blue Jays offered him an AAA contract with the Buffalo Bissons. There he had a 5-5 balance but his ERA was over 4, which hampers his promotion to MLB.

But Raul Valdes is anything but a player who surrenders. He continued his race against time, which made him returning to the Dominican winter league with the Toros del Este. There he was the most prominent Cuban with an ERA of 2.95, with 3 wins and 4 losses while rivals batted for a ridiculous average of .213.

This performance earned him signing for one year and 400,000 dollars with the Chunichi Dragons in 2015, becoming another Cuban over 30 (Yoslan Herrera, Barbaro Canizares) that will show his value to Japanese baseball.

ZiPS projections house says in 2015 Valdes will have balance of 4-5 with ERA of 4.87. For now, in spring training, he exhibits ERA of 1.29 while has almost clinched a spot in the starting rotation for the Chunichi Dragons.

At 37 Raul Valdes continues his path of perseverance in baseball. He has competed against slumps and mysterious storms that have not made him to stop. His resistance is still succeeding in sports.