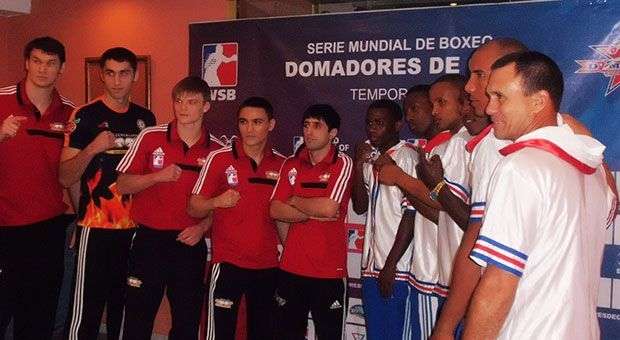 The Cuba Domadores reached this Friday their ninth victory in a row in the 4th World Series of Boxing (WSB ) organized by the AIBA. It was the last presentation of the Caribbean squad in Havana’s Sports City during the group stage of the tournament. The Cubans beat the Azerbaijan’s Baku Fires 3-2 perpetrators thus confirming their status as leaders in poule B, and now accumulate 27 points and balance of 39 wins with only 6 losses.

On the day prior to this match, minutes before the weighing and press conference, OnCuba spoke with Professor Alcides Sagarra about the expectations a possible meeting in the quarter-final stage, between the franchises of Cuba and the United States is generating.

Professor, when only two stops remaining to the end of the qualifying stage of the IV World Series, the sights of the followers of Cuban boxing is laid on the possibility of a quarterfinal duel between the Domadores and the USA Knockouts. This pairing, somehow revive those bilateral matches that took place between amateur teams from both countries during the seventies and early nineties of the last century. We would want to know your opinion on this future confrontation

“When you are immersed in an event with these features results take you to the possibility of having great matches. In that sense the duel between Cuba and the United States seems close, as happened in past decades, and there are many expectations based on the quality and the historic rivalry of both teams. As you remember we faced these bilateral meetings for several years and Cuba never lost, the best US result was a draw, but the matches were always often and sparked a lot of interest. “

In a number of comments related to this match, a tendency is observed considering that the task for the Cuban boxers in the ring will not be very complicated. Do you share that idea?

“We always think that rivals are good, since the day you think the opponent is bad, that he will beat you. The quality of boxing in different nations may vary from time to time . Now many say they do not have quality amateur boxers and I think it is a mistake to think so. They do have quality boxers and a great historical source and while their fighters move fast towards professionalism, they have enough talent to give good fights in amateur boxing. “

This Cuba – United States match would allow the reunion of several athletes and coaches who once were together on the island. In a conversation with journalist Jorge Ebro, the head coach of the USA Knockouts Pedro Roque , for many years the craftsman of the triumphs of our youth teams , said: ” A clash against Cuba would be something important to attract attention and fill with pride all Cubans and Latinos , wherever they are .” What do you think about the environment that can generate the possible visit of the Domadores, presumably in Miami Heats Arena?

“This one aspect the dynamics of the current sport produce. At the time we had these bilateral matches, mostly in the U.S. and always took place in an atmosphere of friendly rivalry, and this time is no exception. Pedro was my student. He decided to emigrate and go to live in the United States, and that is an individual right that everyone has the right to live wherever they want. Now Pedro is doing his job with the USA Knockouts, and I’m sure both teams will give a good show in the ring for boxing fans in both countries. “

“At the moment we still need to pay off with wins the match tomorrow against Baku Fires and the visit to Russia, these are the main objectives in the coming days ,” Sagarra said on his way to the room where weighing and press conference were about to begin.

The first of these goals was already achived this Friday. In the fight that started the match Leodán Núñez (52kg) had a great debut in the World Series. The previous eleven wins in these Series that his rival accumulated matter little: Magomed Abdulhamidov. The unanimous vote of the judges 3-0 (49-46, 40-46, 48-47) validated the superiority of the capital’s fighter in the ring

Then another Havana boxer debuted in the WSB, Pablo Vicente (60kg) but he could not keep the Domadores unbeaten the at home (accumulated till that moment 21 consecutive wins) by ceding to the Uzbek reinforcement Hurshid Tojivaev by split decision 2 – 1 (47-48, 46-49, 49-46). The London Olympic champion, Roniel Iglesias (69kg), resumed his winning ways for the Domadores, easily surpassing Yauheni Ramashkevich 3-0 with identical 50-45.

The scene was ready for what was expected to be the match of the night. The two-time world champion Julio Cesar la Cruz (81kg ) returned to the ring after a two month absence . In the opposite corner was Teymur Mammadov , world and Olympic medalist in the next upper category. After a couple of evenly and quiet rounds, with a smile of true burlesque the Azerbaijani just started intermediate round, prompting the Camagüey boxer to give his fans at the Coliseum a master class in boxing. Intensity, exquisite elusive and terrifying speed marked his show. Mammadov was beaten in all forms and from all angles; I can unequivocally assure that at least 25 of these punches went straight to his face. Smiling in the ring when you are facing a super star: forbidden. Voting 3-0 (50-42, 49-43, 49-45) .

In the final bout of the match inexperienced Yoandris Leon (+91 kg) was defeated by Arslanbek Makhmudov. The European towered over him by inches, and on the scale the difference was even greater: nearly thirty pounds. Leon did not have the necessary tools to address these handicaps and ended up giving by unanimous 3-0 (43-50, 45-49, 44-50) .