Debut of the Cuba Domadores in World Series of Boxing 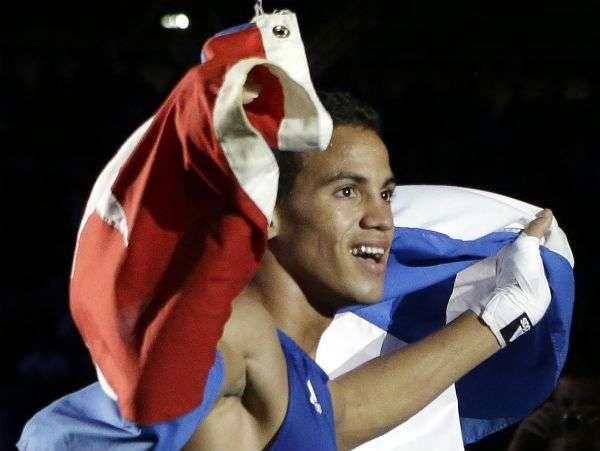 Untreatable as usual, the Cuba Domadores perfectly did their work and drastically solve their debut in the 5th World Series of Boxing (WSB) at the Sports City Coliseum in Havana. In uneven match from start to finish, which was taking voltage over time, the debutants Morocco Lions did not find their natural habitat and were easily beaten 0-5.

The show was stolen by Erislandy Savon (91 kg ), who showed immediately his class and defeated by KO, after a crushing blow, Amine Azzouzi, at only two minutes and 20 seconds of the first round.

A powerful, unstoppable and unfriendly left swing crashed into the face of the African, who was sitting on the ring a good time looking for the correct answer to the following question: so what happened?

” I owe my sporting shape to training, my coaches, and the urge to move forward and be better every day. Each of my victories is dedicated to the people who follow us on television and support us, “the best exponent of the last version said.

Thus , Savon remained unbeaten in the WSB, and is emerging as a strong candidate to achieve the unique berth this division grants to Rio de Janeiro Olympics in 2016.

Another boxer who had an amazing performance was Arlen Lopez (75), winner by TKO in the third round over Eddine Haddioui. The highlight of this fight was watching the modus operandi of throwing the towel. This was just what the visitor coaches did to end the beating t heir pupil was receiving.

The Central American champion told journalists that his view is set at the Pan American Games in Toronto, Canada in coming July, and at the World Championships of the discipline, all as preparation for the Olympic tournament to be held at the South American Giant. “That’s my goal,” he said.

Minutes earlier, the Olympic champion in London 2008, Robeisy Ramírez (56), beat unanimously and taking thus revenge against the Moroccan Mohamed Hamout, with an exact hitting, good boxing performance, especially in the initial round.

Ramirez was defeated by the African one week before the start of the Central American and Caribbean Games in Veracruz, but now he left no room for doubt. Even when answering a question about the quality rise of his boxing, he explained that the bad times had passed and that he wanted to be the man who was number one in the 52 kilograms in the world.

However , one of the most pleasant evening news fell on the young light flyweight (49 kg) Jhoanys Argilagos, who is only 18 and in extremely close combat also beat 3-0 Zouheir El Bekkali, although the score left unsatisfied the Moroccan, something with which I agree.

The fight, voted 49-46, 50-45, 49-46, never showed a real dominator, El Bekkali even seemed to be winning at moments, but Argilagos showed himself with good technique, mastering distance working well from outside and inside, and with a far superior rhythm that that of Santiago Amador , leader of the division 144 hours ago.

The raw material exists, you just have to work, and we do not doubt that Argilagos can be the one designed to get the ticket toward the summer event in Brazil. His universal junior title endorses him for grater endeavors.

Argilagos explained that he was a bit lack of physical preparation, since he was debuting in five-round combat, thereby he lost pace in the closing stages. However, he was confident in having better performances in the future.

The remaining success came through the fists of the double orbital runner up, Yasnier Toledo, winner over Hamza El Barbari, silver medalist in the last Cordova Cardin contest in our country. Shy at times in his performance, the also Olympic bronze medalist did show his main weapon: the accuracy in blowing, and earned a 3-0 verdict.

So, the Domadores already command group A and are postulated with complete fairness as one of the favorites to the scepter of this fifth edition. Now, in C-2 format (52, 60, 69, 81 and 91 kg), they will struggle this January 23 as visitors in Algeria, where they are also appointed as favorites.

Over there it is expected the presence of Yosvani Veitía, Central American champion; the two-time world king Lázaro Álvarez; the leader in London 2008 and one of the best amateur fighters pound for pound Roniel Iglesias; the double universal champion Julio Cesar Cruz; and the rookie in these contests Leinier Pero, Pan American gold medalist, but in the lower category.

The goal of the 32 athletes registered by Cuba is marked: to become the first franchise to win two times the main competition organized by the governing body of the discipline. At least , the first step was not in false and ingredients exist to re-mix the formula for success.