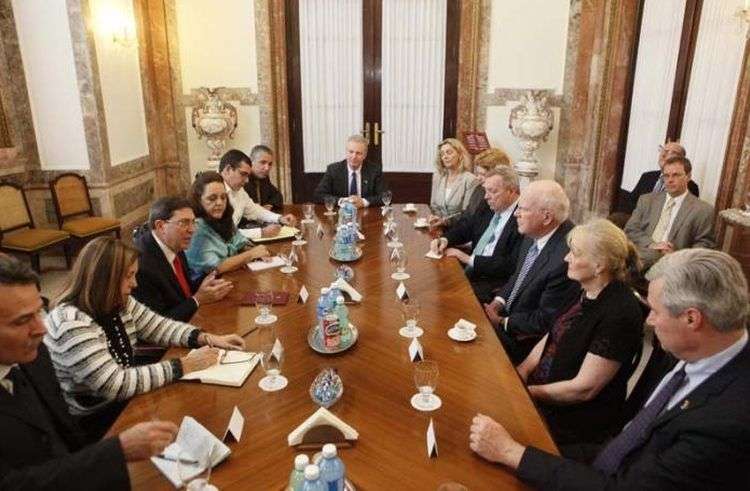 The Minister of Foreign Affairs of Cuba, Bruno Rodríguez Parrilla, received the delegation of US senators and congressmen who visited the island, hours before the first talks to normalize bilateral ties.

In a brief note, released Monday evening by the Granma newspaper, the Foreign Ministry said the minister met with Senators Patrick Leahy, Richard Durbin, Sheldon Whitehouse and Debbie Stabenow and Representatives Christopher van Hollen and Peter Welch, all from the Democratic Party.

The information added that on the exchange also participated director general of the US Department at the Foreign Ministry, Josefina Vidal, José Ramón Cabañas, Head of the Cuba Interests Section in Washington. “Issues of interest to both countries were discussed,” the statement said.

Along with this meeting, the list of requirements prepared by the US government delegation that will arrive in the coming hours to the Caribbean nation to lead the first round of talks that would resume diplomatic relations between the two countries was known.

Among Washington´s requests, reported by the Associated Press, are increasing their diplomats and accreditation; removing travel restrictions, to receive or send mail and access of Cuban citizens to the US mission.

The US delegation will also propose to extend the cooperation of both parties in counternarcotics operations and the fight against Ebola, areas in which there should be no discrepancies since the Cuban side has also shown interest in these issues.

On the agenda of talks to normalize bilateral ties it was confirmed so far that Josefina Vidal will lead the host delegation. Her counterpart will be Roberta Jacobson, assistant secretary of state for Western Hemisphere Affairs of the United States.

Both officials will meet Thursday in Havana, after a round of migration talks scheduled for Wednesday at the Conventions Palace in Havana.