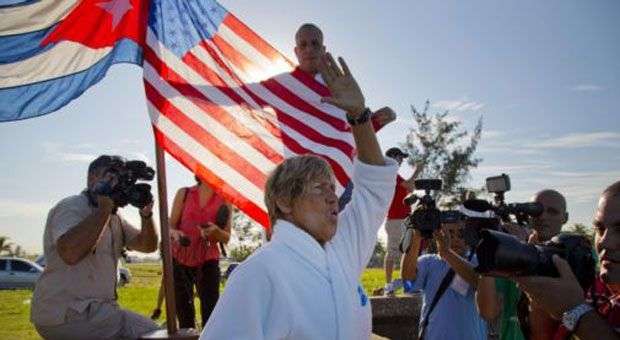 It is said that those who persevere, win … and that is true. One of the biggest proof of that, perhaps, was starred by American swimmer Diana Nyad, who after three failed attempts of crossing Florida Straits, covered the route between Havana and Key West without any protection.

Minutes after her arrival in northern soil the president of the United States, Barack Obama , conveyed her through his Twitter account: “Congratulations, never give up your dreams”, something about what Nyad has always been convinced; let us say that she has made it a philosophy of her life.

“I have three messages. First: we must never give up. Second: you’re never too old to try to make your dreams come true. Third: it looks like an individual sport but it really is a team effort, “the veteran athlete declared, exhausted after 52 hours, 54 minutes and 18 seconds swimming.

But the prize is unequaled after four failed attempts since 2011, only that now luck accompanied her, because there is no doubt that this is an indispensable factor in a very complicated trajectory.

For you to get an idea , Diana swam in an anti-jellyfish suit and used a protective mask for her face, plus a shark surveillance team that got into the water every 15 minutes to search for sharks or jellyfish.

All these measures were used to cover a distance of over ninety miles. “Diana is on the way to swim 112 miles in her attempt to become the first person to cross the strait without an anti-shark cage. This is 35 miles more than anyone has ever swum, “her navigator, John Bartlett, said prior to her departure, perhaps with some doubt whether she were to achieve the feat.

However, Nyad crossed the reef barrier near Key West at 11:00 a.m. and arrived at Smarther beach minutes before 2:00 p.m., an unmistakable sign that the dream was about to have a happy end.

She came out the water wrinkled, tired but with a smile and the satisfaction of overcoming a tremendous challenge, which had only been achieved by Australian Susan Maroney, but protected by an anti-sharks cage in 1997, when she was 22.

“Making a video clip in Cuba is not easy at all”

"We have to publish literature from the exile" (I)