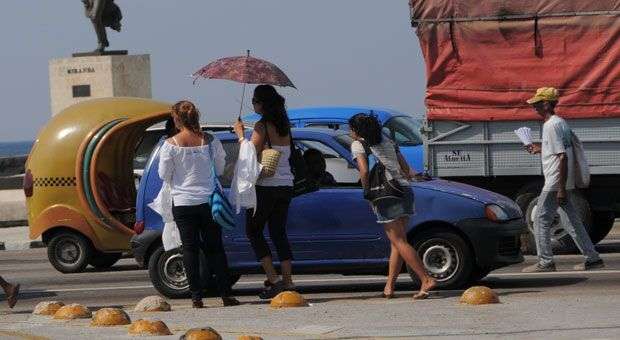 My father had a car whose engine roared in a way that I knew very well, and not just because I was endowed with a keen ear. For a long time in my life-in a short life, you go where your daddy drives you if he has a car, even as mine was, even when the going out or errand was not his , or didn’t include him at all. That yellow Lada or metallic blue, or brown, it did not matter: it was always “the old with rouge” – is the first means of transportation I remember.

It was alternated, of course, with the bicycles-in time, immediate preceding the issue that concerns me. It was the time when one or both parents of my friends and myself had always ready a seat adapted especially for us in “the horse” above all, and it seemed that there you could get anywhere. –we got almost anywhere-).

But as I was saying: hitchhiking. I started practicing it without knowing the words that gave some body to its concept. With my mother, with one or other of my sisters-both are older enough than me-, I was sometimes waiting in certain corners, witnessing them to ask something that I was not paying attention, just before getting on the car of a stranger who, from that brief spin, it was a little less. But I was not protagonist: it is wrong to say I practiced, exercised by the act of hitchhiking (a paraphrase that condemns us the absence of a verbal form with minimum attributes).

Co-voiturage they say in French. It was once on a test that I had to take in Havana, a Cuban school. Co-voiturage was one of several responses given to the question: “You, as a Frenchman, what could change daily habits to reduce consumption and favor Third World countries?” This purported “first world consciousness” does not fit this tropic. In Cuba you hitchhike because transportation is bad or there is no route that matches the desired destination. Simple.

Then I suggest using differentiated verbs according to the different stages of the process: hitchhiking involves the act in its entirety, from the layout until the end; asking for a ride will be referred to when someone is required the favor, giving a ride is the action to grant the request, always ignoring the origin, that I do not know, of the use of the word. Let’s also identify types according to the roles they play at different times of exchange: applicant, beneficiary, potential sponsor and benefactor .

So, ask for a ride means to identify a potential benefactor, engage in a relationship , face it,  the voice, intonation, dignity to the denial or rejection (potential benefactors, at the mere approach of the applicant, do not gesture-thanks -I take it-not-interested, and like when you offer him a tray with something), and when the sincere gratitude when he is solicitous. No one who does not submit to each and every one of these activities and the risks involved, have the right to say that it has hitchhiked. (When done in a group, this actor will take all the credit).

During adolescence occasionally I had met the established protocol, but it was not until college that became something of extreme frequency. I had failed too many times trying to use public transportation, so I tried my luck with the hitchhiking. And I did not go to college never differently. Five years of practice allow me to systematize it and lay down some basic knowledge about this practice that has, after all, multiple levels of expertise and refinement.

First you have to discard the myth that marked histrionic talents are needed: a look that inspires confidence, a minimum of courtesy, timely identification of words forbidden as “driver” are enough to claim a critical success chance.

An important part is to know the benefactor. I will introduce certain types (while recognizing that the relationship benefited-benefactor has many types as there are possible combinations):

There is the guy giving ride because he needs to talk. The applicant, as beneficiary, becomes a perfect excuse. No matter if you are interested or not, no matter your answers to questions, even if answered or not. The beneficiary is, just, being for the other person guarantee that his incontinence is not overwhelming enough to lead him to talk to himself (because no doubt that even in the presence of another, this person is talking to himself). Here, the beneficiary’s function is almost therapeutic. It is important to note that people-oh yeah-always want others to confirm they are right. It is never well seen that a beneficiary of a ride contradicts his benefactor in his own car.

There is no shortage, on the other hand, of silent ones that they not only refuse to speak, but emit a dense silence, a silence that fills the car and out of the windows are leaving a trail. (If these are closed, the space becomes almost unbearable). Silence presses the beneficiary’s chest, and presses it with the feeling that is responsible for that rarefied atmosphere. The silent knows these effects, so that, feeling sorry, not infrequently he attenuates it by playing some radio, softly.

There’s a guy that that the minute the beneficiary sits on the seat, starts running everything executable inside his car. Screens, DVD with all ports, phones, electronic noises, useless remote controls for commands that have at arm’s length with the elbow flexed, are responsible for (pretend) show the newcomer that no, that is not a simple car.

The design of the route is a top issue. Although nobody like the applicant knows where he is going, how he wants to do it and what’s best for him, the fact that he says it, already in the car, may look to the benefactor something characteristic of a crass insolence. – Where are you going? -Excuse me: where are you going? But he insist back, until the beneficiary can only “take his place”, confess his destination for the benefactor  to sponsor, make his vocation to guide and indicate, superbly direct, and patiently listen or do as if he has heard, before finally asking him to make the really desired stop and identified from the beginning as accurate. (We are not exempt from the times when the benefactor’s advice is helpful, but its own number discards them as noteworthy).

There are some routine questions: Are you going or coming back? Do you study? Oh, journalist?

I cannot testify to other professions. When journalism, information in response followed instruction from a theoretical and practical handbook, full well whose depth depends on the extension of the shared path, and the ability of the beneficiary (journalist) to encourage or discourage his interlocutor. I conjecture that economists and athletes must have suffered similar fates.

Finally, we bring up the easygoing, with a smile on his face, no, it’s nothing, and have a good day. Many returned some faith, sweet. Others sometimes they are bearing a round happiness that is suspicious, particularly at certain times of day.

For applicants / beneficiaries the types usually have many more points in common, but we could do a decent classification. Special is the faculty which, from its sustained exercise as beneficiary, the applicant acquired for different profiles preset the actual or potential benefactors. Right when the car is slowing down at the traffic light, the face of the person operating, the speed, are eloquence at its best. You may foresee the answer; catch a glimpse of the future features of conversation. The applicant is specialized and begins to dominate the art of reading lies, child anxiety, the disappointment, and then handles the situation calmly. This is how the applicant eventually begins to be more effective: not because there is more benefactors, but because they will increasingly be better at recognizing the most suitable options.

Taking account its complex nature, hitchhiking is the scenario of futile meetings, those who do even a trace that is cut close the door until deep brand occurs which calls the reunion. hitchhiking promotes a fight and can also be wedding seed.

Now, the gender issue should be tackled separately. Most of the applicants are women, of all ages, of all aspects. The oldies are taken for being old ladies, girls for girls, obeying different reasons as not a few beneficiaries and benefactors. This is, the sexual connotation, the possible reason for the reluctance of potential benefactors-men-to give a ride to male applicants, and the enmity of potential benefactors-with-women applicants in general, both men and women. And of course, the ever changing attitude of male potential sponsor if a woman goes by his side, and it is not wise to ask for a ride in such cases. Those applicants who overcome such prejudice shall be punished with a glare by potential co-benefactor woman, as if breaking a fixed ancestral iron rule. Given this situation, rarely transcend their status as applicants.

For a long time the actual and potential benefactors were mostly men, but women growing rapidly in numbers are approximate, but they are a different type:

To the extent that surprised exceptions, women who drive mainly petrify their  faces in a red light, turn their gaze to an empty spot on the horizon of their windshield (in the rare case when not wearing glasses on, circumstance who will be forced to emphasize some contention with the lips). I, to this day whenever applicant or beneficiary, admirer of good and great benefactors, legendary sacred givers of rides, I’ve said many times: “If I drive at a traffic light I will not ever have a bad face”.

"We have to publish literature from the exile" (I)