Our volleyball talent “from Cuba and to the world” 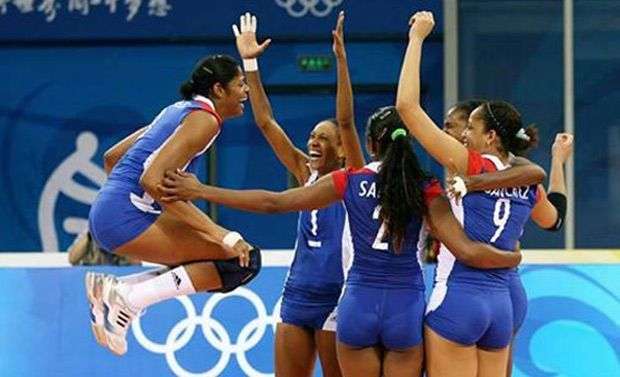 The news, for their relevance and their possible implications for the immediate future of Cuban volleyball, it is socializing at remarkable speed. As is discussed all over the web, and in unison is unavoidable topic of conversation in public and private spaces of the island. Months ago it was hinted as a possibility and from Tuesday transcends as undeniable reality.

The talks between officials of the national federation of the sport and players who for various reasons had left the national teams have started. This was confirmed on Tuesday to the digital site Radio Havana Cuba by Fernando Hernandez, who was the outside hitter in the team that won a silver medal at the 2010 World Cup. In his statement he said, among other details, that these initial approaches had included the auxiliary setter Raidel Hierrezuelo and Osmany Juantorena, and expressed his willingness to return to the Cuban team in May 2014 once he completes his professional season in Japan. He further added that the federation did not include in their interest to call athletes who had “defected”.

Coinciding in time with this news, but not in the same levels of socialization achieved, other scoops related to our volleyball will be unveiled. Approaching them is also an ideal to reach a better understanding of the rugged reality afflicting the Cuban volleyball, and thus elucidate some whys on newly implemented strategies. Let us see that other developments deserve to be commented.

At this moment there are more than twenty Cuban volleyball players authorized by the FIVB to play next season with their respective professional clubs. Our stunning girls are not going to lag, and they are already eleven which captivate with their indisputable quality to the public of various nations. Both lists will probably add new names in the next future.

Thus the Russian public can enjoy live a fearsome threesome Morenas: Nancy Carrillo, Yumilka Ruiz and Rosir Calderon. Another dream trio, but men in this case, make the rounds through Turkish territory: Henry Bell, Leonel Marshall and after a spectacular season with the club Trentino in Italy, Osmany Juantorena. In Azerbaijan there will be two setters Yusidey Silié and Daimí Ramirez, who is still waiting for the approval of the FIVB. Also in Asian lands will be among others Rachel Sanchez, Egli Sabin and Odelvis Dominico in the Kazakh league, while in South Korea stands out the presence of Maikel Sánchez, “the Russian”. In Italy remain playing for Piacenza Roberlandy Simon, also waiting for authorization. An experienced center will be “hunting” attacks in the Romanian League: Zoila Barros, accompanied in that nation by Martha Sanchez.

On this side of the ocean, in Brazil, Angel Dennis will continue playing; Yoandy Leal and Rolando Jurquin share victories and defeats in the Volei Taubate club along the local idol Gilberto Godoy “Giba”. Also dazzling the fans will stay a girl: Yuslenis Herrera. The delight with our volleyball will also present in gyms and arenas in Switzerland, Portugal, Germany, Poland, Japan and China at the moment, with a mixture of young athletes, and other equipped with high seniority.

Being aware of these details is cause joy for all fans of Cuban volleyball but, paradoxically, sometimes they also hurt. These diametrically opposite feelings to surface have its genesis in two interpretations to be drawn from this information. For one, how not to feel full satisfaction to know that at least fourteen nations will be direct spectators of deadly attacks, devastating serves, passes and blocks drawn strong, impregnated with a special all Caribbean flavor, Cuban flavor. In unison, the pain sensation refers to the inability of these players to represent our people in international events to re-dress, at least until now, those uniforms with the four letters drawn up to their chests: Cuba.
During the last two Olympic cycles it has been notorious the increasing personal applications for dismissal from volleyball players of both sexes have also occurred separations from indiscipline committed, at least officially undescribed, as well as cases of players have decided not to return to the island after participating in international events.

This continuous trickle of athletes has had its most visible result in the significant drop in the results of both teams on the world stage (much higher in women than in men). The ultimate expression of this debacle takes us back to the immediate past: first, the lone success in its passage through the World League by the men’s team, accumulating nine losses, and shortly after, there also were nine defeats suffered by the girls during the Grand Prix, but in this case didn’t even win once. Clattering collapses that made recognized volleyball coaches and other countries to be concerned, all of the great admirers of Cuban volleyball history.

In the lower levels the situation is not encouraging. From the base of the pyramid of volleyball in the island: from schools and sports areas, to reach youth teams, are being observed deficiencies in every way that don’t  invite you to dream of a future in the medium and long term very different now.

It is mandatory and inescapable the need to rethink the way our sport movement takes its relationship with an athletic universe marked, for a long time, by the professionalization and commercialization of sport. Stay back to this reality was never advisable, not give voice to the athletes in this process of analysis, ignoring their ideas and motivations, either. Learning from previous attempts that were unsuccessful and chaotic in its consequences is a must. Then these dialogues initiated in volleyball deserve to be applauded, while respecting and reconciling individual and federation interests, and for them to be less exclusive.

For this writer, there are wrongs that the more utopian they may seem, are possible to undo. In this particular case, that of volleyball, is one of the histories that make Cubans proudest whether it is sports, which is why we all owe it at least trying.

Cuba tries to bring back its volleyball players

Sotomayor: “I would never give up being Cuban”

Sotomayor: "I would never give up being Cuban"