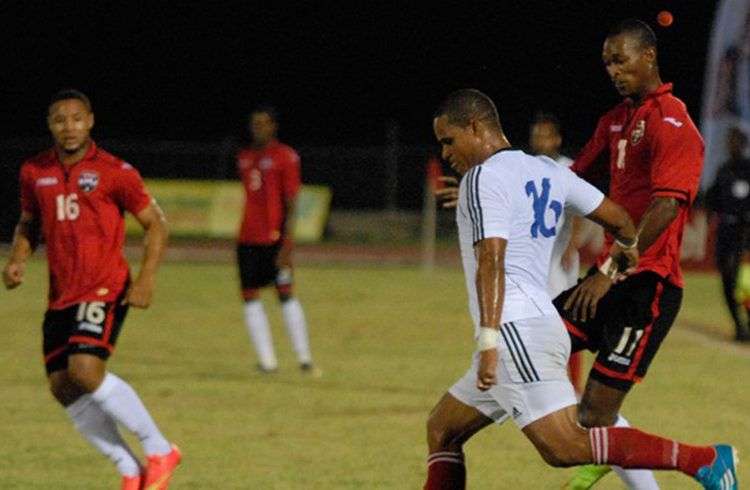 With a goalless draw against the Soca Warriors, Cubans lost the chance to defend its title as champions of the Caribbean and to participate in the Copa America Centennial, although they got a direct ticket to contest the 2015 Gold Cup.

Directed by Walter Benitez they played two heartbreaking games before facing the Trinitarians. In the first, against French Guinea, Cuba opened the score through Ariel Martinez at the 57th minute and, thanks to several worthy saves by Diosvely War, they managed to maintain their goal unbeaten during the game; but in the 94th minute, substitute Michael Solvi sent the ball to the back of the net after a pass from Rudy Evens to seal the tie and leave the Cubans with a single point.

In the second game, the tone remained and a goal in the 95th gave them the victory over the weak Curacao. The Cubans were never behind in the score; they scored first on the 15th thanks to Jorge Luis Corrales, but at almost halftime those led by Etienne Siliee tied the scoreboard thanks to a goal by Rajcomar. Cuba returned to take command six minutes after the start of the second half, this time thanks to Yasmany Lopez, but the joy was short-lived for the Cubans: Gevaro Napuceno was commissioned to establish parity again 69 minutes. The draw seemed unavoidable until Orisbel Leiva scored the third for Cuba seconds before the referee looked at his watch to declare the end of the game; Cuba does not want to be left with the bitter taste in the mouth and gave Curaçaoans a try the same medicine that French Guinea gave them the previous day: a goal in the last minute.

With these four points, Cuba had chances to move to the finals if it managed a win against the Trinidad and Tobago team which it had defeated two years earlier in the dispute for the title of the previous event with a goal by Marcel Hernandez in the extension. However, this time it failed to break the scoreless tie, so that Cubans lost the chance to defend their status as champions and the opportunity to play the Copa America Centennial. Despite carrying the weight of the match, having the greatest chances and neutralize the front of the Soca Warriors, the Cubans failed to pierce the goal defended by Jan Michael Williams, forced to make several worth saves. However, the main target, the Gold Cup 2015 was reached.

Again Cubans show that playing in a league that is cooked in its own juice possess a respectable level, though far from the true ceiling of growth potential offered by the different leagues. Until now, the dream of participating in a first class event moves farther; Copa America Centennial was the chance to reach out and touch the roof of the soccer world, but it could not be, maybe in another hundred years we can qualify.

A Blue Diamond in Cuba

The lies of the "galactic blackout"