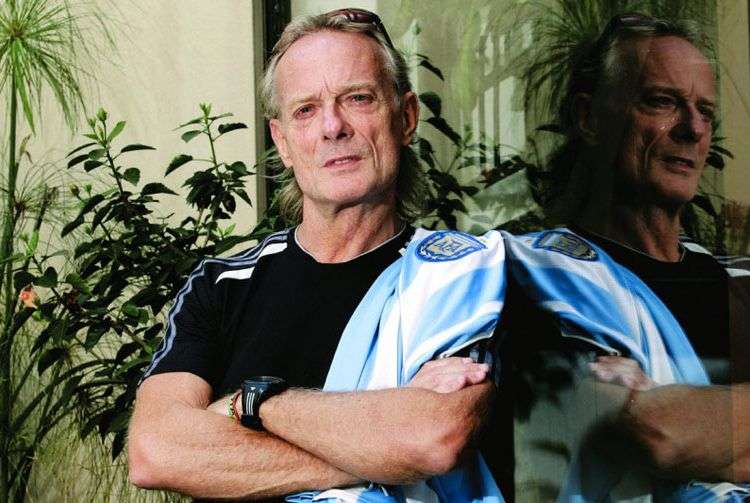 Fernando Signorini is a wise man. He is a football connoisseur. He can make anyone understand whatever is right under their nose. He is a gray-haired and ovoid guy, who understands football and explains it in simple termsas no one else can, without any masks, when people still (naively) think that there is only a winner and a loser at the end of each match.

He has devoted his life to distributing players’ physical strengths and gathering them before every match for an exquisite talk. Maradona listened to him during the world cupsof 1986 (when they became world champions), 1990 and 1994. Lionel Messi also paid attention to his instructions in the matches against Argentina in South Africa.

“One gram of brain tissue weights more than 80 kilograms of muscle” states Signorini, with exceptional discernment. His intellectual acuteness led him in 2006 to write the unique eulogy that defended the incredible head-butt Zidane gave Materazzi  in the final of the world cup and made him take tens of books with him to create a library at the space of the Argentinean selection in South Africa.

He is a philosopher in football that has get bored of his passion and is tired of seeing how this sport has become a reflex of the society of his country. If football is a reflex of society, he would rather step aside from itand ask for a change somewhere else “where values are non-negotiable and it is still worthy to do what I love; I lost my passion a long time ago”.

Some people claim football is no longer a sport but a religion and its notorious imprint has moved far beyond the field. How would you explain this phenomenon?

Obviously there are many different reasons that have led football to become one of the main entertainments of a great mass of people. It is a ludic expression that merged from lower social classes in the planet, which represent an overwhelming majority. The development of the mass media and the possibility of access for millions of people from financing plans within their reach and the obvious interest of enterprises to advertise their products for such a high number of potential clients, are powerful arguments that move companies executives to invest considerable amounts of money in it, with the certainty that the incredible profits obtained will turn it into an excellent business with low risks.

So, the football boom is due to the meteoric audiovisual ads that support it?

Generally speaking, there is an obvious manipulation of this passion in favor of the big owners of this business and the interests of many governments. The big owners have turned football into one of the most profitable industries in the world; the profits from the last world cup are astronomic but I’m convinced that only a small part of it are devoted to honestly meet football’s development needs in the neediest countries of it.  How much does Cuba annually get from FIFA? Probably a minimum amount.

Cultural elements are absent. Perhaps I’m too skeptic when I say that the inefficient use of the television and its shameful content favor a deprivation of culture rather than the spreading of essential values for living in society through football. The show is full of harmful messages for consumers. The atmosphere is always tense, the terminology is vulgar;unbearable anguish, clenched fists and furious gestures are intentionally emphasized and repeated to increase anxiety and morbid fascination.

However, it is impossible to deny football’s charm, its most romantic face and the attractive passion it unleashes among spectators.

Football is deeply linked to the culture of the popular classes but its meaning has been distorted from politics and businesses. So, what about the chance to be happy through football? The incomparable pride in defending it with honor has been doomed to ostracism because it is archaic and old-fashioned. So, what about essential ethical values for development based on humanism? Fine, thank you! Anything that cannot be sold and doesn’t generate profits does not exist. Poor sport, poor football, poor dreams!

Are these anomalies also present in Argentinean football?

In Argentina football has become a huge sociocultural manifestation. A simple football game is represented as a heroic deed that jeopardizes the pride of its supporters. No one is willing to understand or forgive a single mistake; everyone demands to be champion regardless of the costs.Such deterioration of means and ways has had some negative influence in the quality of the game to the extent of transforming most matches into an unbearable display of vulgarity.

By now, it is possible to say that rather than a cultural expression, football has (been) turned into an unequivocal display of ignorance that has gradually taken over social behavior. Violent clashes between bars; assaults;car firings; attacks to rival players or their vans; dead, hurt and arrestedpeople. Human stupidity has no limits. If you have doubts about it just take a tour through Argentina and you will change your mind.

Cuba is not being close to the football elite; however, a huge passion for this sport is noticeable on the streets. How do you explain that?

The number of weekly encounters through the television is a powerful encouragement that brings new fans in. Fortunately, the Cuban youth has developed enough antibodies to join the media campaigns, which in nations governed by miserable capitalist objectives, have alarmingly prostituted the highest football and sports valuesin general. I believe it is necessary to be really careful and watch over its evolution in order to prevent them from the dangerous risks of imitating that kind of behavior. César Luis Menotti usually states: “football is a wonderful excuse for being happy”. I have to agree but I would add: if it doesn’t make it, it isn’t worthy at all!