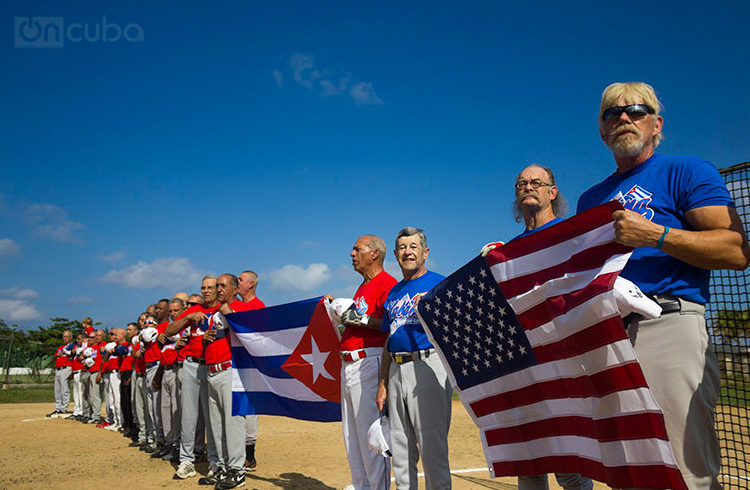 In this story, winning does not matter much, is in the anecdotes. The score only justifies the fact. Neither blue nor red repaired too on the board in the win. It is the softball stadium “Julio A. Mella” in Havana and another edition of “Friendship Games” between Cuba and the United States is taking place.

An event of exchange between the two nations held in the Island for the seventh time-three have taken place in the USA-, an encounter which has become a ritual of good will to link the two countries taking softball as an excuse.

A great connection that flies to fall beyond the outfielders, a hug, a harmless grounder to second base that becomes a blunder, a hearty slap on the shoulder. In the field one perceives the intent of the initiative, there is not an explicit challenge between the two campuses, the game itself serves as a bridge of friendship.

The northern team player, Michael Eizenberg, president of Educational Travel Alliance (ETA) and one of the official sponsors of the project, says, “We do not speak Spanish quite well, but the language of softball unites us and thanks to that each year we can fraternize again, unite the two peoples. 6 years ago we started these meetings, initially only played former professional players from the two countries now ordinary citizens have joined. At first we were friends, now we are brothers. ”

This 2014 “Friendship Games” is dedicated to Mantecado Linares, star baseball player of the first National Series in Cuba and one of the founders of the idea. So this time, the jerseys of both teams display number 26 on the back as a faithful tribute to his legacy.

“He have to thank him very much, was one of the biggest driving forces behind these meetings, an example of a person and as a player hewas outstanding. Although he is in heaven we shall never forget him, “says Eizenberg.

The inauguration was conducted by the National Concert Band who played from the field the national anthems of Cuba and the US. In the bleachers there was a representation of the nursing home of the “Las Mercedes” Church of Old Havana, one of the beneficiaries of the project.

Nelda Cabrera, 76 years old, said that “we are very grateful for this approach, for the help you have given us, it shows that is a lie that Cuba and the US they are enemies for life, they have treated us with the heart, they have given us many of their benefits “.

Meanwhile Katherine Rice, vice president of ETA and a major architect of exchange, notes that “the bonds of friendship become tighter increasingly with Cuba, we are living enchanting experiences with these people. We have nurtured tremendously from sharing with these elders, we have shared together for several days. We are getting to know the Cubans and showing our affection, a comforting reminder “.

Meanwhile, Rey Vicente Anglada, former second baseman and manager of Industriales team, stops warming up before the game to declare that “this is a nice way to bring these people through one of their passions. With initiatives like these, Cuba and the United States can embrace and put aside those uncertainties that have always surrounded this historic relationship. ”

Another glory of baseball in Cuba, Pedro Chavez, who each year participates in these games of friendship, believes that “this is nothing but a message that we can share with our neighbors, we must erase the past and start writing new pages “.

At this point, the final score does not matter, it’s not important. In a game a bridge was born, and with it two distant points are intertwined. In the home club dugout we can find other baseball luminaries in Cuba, as Juan “Coco” Gomez, the manager who has directed more teams in National Series.

“I am participating for the first time, it is an honor for me they have called me to represent Cuba, this is the perfect place to bring the two peoples and give us a hug time. The idea is great, but not enough to stay in this scenario, people have to join, this transcends the sport, “Gomez says.

And with the final out the game does not end the real gesture begins.