Reinaldo
in Technologies of Communication and Media
0 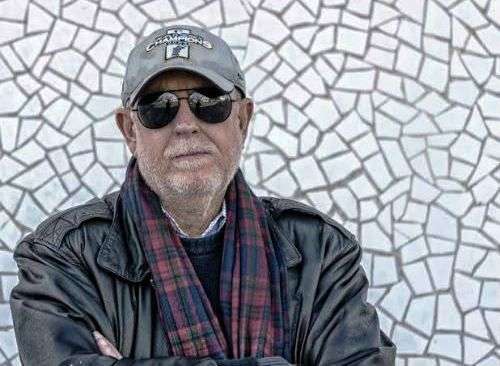 The film ¨Los pájaros tirándole a la escopeta¨ is like an amulet under his skin; but his devotion for the cinema did not stop there; no stinging, or distance has stopped him. The past, the present emerge from his own creator threads…

If taking a look at his work as a documentary filmmaker, screenwriter and director, to the stage of the creative groups formed in Cuban cinema, what works and what colleagues would you keep?

They were contradictory years, but with a lot of creative illusion. My approach to Tomás Gutiérrez Alea, greatly enriched my way of seeing cinema and life. Rocinante Group is something I never forget, especially my deeper bond with Juan Carlos Tabio and Rapi Diego -my preferred within the Creation Group, without ever leaving my brothers in Cuban cinema; Daniel Díaz Torres and Fernando Perez who belonged to another group. I want to highlight the important role played by the then president of the Cuban Film Institute (ICAIC by its Spanish acronym), Julio García Espinosa, promoter of the Creation Groups. The film that characterized that era was Alice in Wonderland Village, which though was not made by my group, but Daniel Diaz’s, shook the foundations. It received a brutal attack -the word is not exaggerated, by an official position very distant from ours.

It was terrible what arose around that witty story, and resulted in the union of the filmmakers and almost all ICAIC workers “Who killed the Commander? Fuenteovejuna, Lord … “Such was the spirit of that time although the official rejection to the film then prevailed over the desire of filmmakers and film workers … But ICAIC remained. That was an achievement.

A film like Los Pajaros tirándole a la escopeta (1984), beyond its comedy status, is in my view a demonstration of its ability to appropriate the Cuban wit and from there, to dialogue with society. How much has this film given to you over time? Have you bothered being associated too much with this title?

At best and worst sense , Los Pajaros … is something ubiquitous in my life. Not a single day goes by in which someone to remember it me. Even those who once vilified it now recognized it. It was a walk through elements of Cuban identity. But I am quite aware that it was not a great movie. However, it’s been 30 years and it is still there.

In that sense, it hurts me a lot that other part of my work is not valued, it is censored, just few talk about it or is shown with limitations in Cuba. I s tart the tour with ¨Melodrama, ¨more scathing and irreverent that the aforementioned film and that has been ignored by ICAIC. The average Cuban is unaware of its existence. Perhaps it is too late to make room for it. If at the time it had been exhibited without limitation, it would occupy another place in the collective memory of Cuba, and perhaps Los Pajaros … would have had to share its reference with this other title.

I continue with ¨Si me comprendieras¨, even more ignored than Melodrama. It is a docudrama with a strong impact outside Cuba, but it was exhibited very few here. We know it’s weird that documentaries to be massively acclaimed by viewers, but perhaps, without implying any artistic comparison, if it had had the opportunity to have an exhibition like ¨Suite Habana , ¨excellent movie by my friend Fernando Pérez, things would have been different.

How a creator of your experience reconstructs and feels Cuba from its immediate environment and from himself, even if he is far from the island?

Cuba, the country as a nation, has never been separated from me. I stopped to identify it only as a Revolution: I see it as a country of all Cubans, and when I say all, I mean it in its most inclusive sense. From this reflection I made ¨Actresses, Actors, Exile¨, a tour on icons of Cuban cinema who live outside the island; but who do not cease feeling it, because it also belongs to them. In the 21st century it is absurd to ask if a Cuban is from inside or outside.

The subject of exile is recurrent in your work in recent years. After those looks, how does the exile mark a creator and a human being? How much does it enrich you?

Nostalgia never abandons those who left Cuba. Neither those who profess to be farther from Cuba and its reality are far apart from Cuban topic as they say. What happens is that there are always those who seek to identify the nation with political ideas of one sign and that is where everything goes wrong.

The films I have made with Cuban issue have a difficult insertion. By having no Cuban nationality, by being made outside Cuba, they are works that have no country, become stateless products that usually remain in limbo. Inscribe them in Festivals is complicated. Often countries have laws that do not allow them to assign nationality of where they were made.

Therefore, I prefer to make films that touch indirectly related topics all Cuban Diaspora. ¨Cercania¨ or the documentary Actresses, Actors, Exile, tell stories in which Cubans are directly involved. What would have happened if at the time Cercania had been normally displayed in Cuba? What could have been the fate of a film that I’m sure would have had “impact” in Cuban movies? Then it is worth wondering whether the Cuban people would know me only by Los Pajaros…

I know that Cercania walks the country among the famous “packages” or rented copies of poor quality. I know it; but it saddens me that Cercania and other proposals have to be viewed that way, never having gone through commercial cinemas. In Cercania, the characters go from one end to the other of political ideas. Those who inhabit these poles express their views without restrictions, but the family, friendship, tolerance joins them. In the end all the characters end up understanding, accepting each other. I’m not giving an assessment that does not correspond to me; I only made clear my purposes.

¨Los caminos de Aissa¨ is a docudrama with more universal looks, but that does not stop hiding our absences, loneliness or the presence of differences. It is represented by an African woman who needs to be European and not to be alone, who needs to be admitted despite being black and Go-Go ballerina in a society that accepts her; but of which she, nevertheless, is not part. These experiences are acquired by living outside the usual environment and enrich us towards to be more universal beings. It is a spiritual gain of great magnitude.

The character of Rolando Diaz is not the same in Los Pajaros tirandole a la Escopeta than that of Si me comprendieras, film made in Cuba, but already living abroad. It is not the same the one of Cercania or La vida segun Ofelia -a fully Spanish film – and the one considering the emigrant pain in El largo viaje de Rustico or Los caminos de Aissa.

You win and lose with those experiences … but honestly I think I’ve matured, I’ve grown up working for my own company, imagining and jumping many obstacles in the real world, and living-at the end, what I learned to do in Cuba.

How do you remember your participation in the Workshop of Film Critics, in Camagüey in this same year and which are your projects right now?

I have very fond memories. I felt really good and well respected. I only disagreed with the way the national press reported my presence at the event and that was not the responsibility of the organizers. I was awarded the Critics Prize and the National Television Newsreel and other media elaborated the news so that it seemed I was still living in Cuba.

I wrote an explanatory note that has not been disclosed by the official media. I think it is a need to extend the debate on this and other issues vital to the future of the nation. Juan Antonio García Borrero immediately published the note in his recognized blog Cine Cubano: La pupila insomne which can be viewed at:

In these moments I live in the Dominican Republic. I did very well in the Canary Islands; but life gave one of its unexpected twists and I landed in the Caribbean. Here I rearmed my life and I have two new projects underway. I live surrounded by Cubans; they are inevitable for me, although the issues of future projects, at least for now, do not involve them directly.

I will attend the Festival of Havana this year. Los caminos de Aissa will be displayed there and while I can, I will be present to talk with my natural spectators: Cubans. Luckily I had an independent life outside Cuba, I don’t have to explain my decisions to anyone, and that makes me happy, because hate does not encourage me but proximity.