Yoandy Leal: “Cuba is out of the volleyball elite because of the officials” 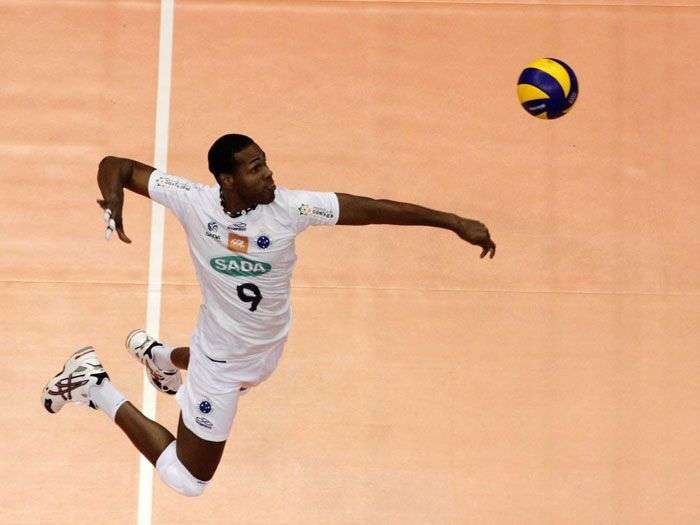 Until a few months ago only, every day, without exception, Yoandy Leal lifted his phone in Belo Horizonte and called Havana, even for just a minute. It may seem routine, but it’s the only thing he could cling to challenge loneliness.

In Cuba he left his entire family, hence every day he was trying to find in those distant voices the balm of encouragement. He saw how his oldest son started walking and just heard his little cry. He left the island to pursue a career as a professional volleyball player. “It’s the strength to be here,” he says in a promotional material of the Sada Cruzeiro club of Brazil.

Earlier, Yoandy Leal was a mainstay in the national Cuba team, a star inside hitter. He was a guy with a devilish serve with a respectable defense and had enough resources to avoid, from the air, opposing blockers fingers once he rose to attack. He was a player whose talent spilled from his pockets. A crack.

But Leal was never liked by his coach Orlando Samuels. Perhaps because the odd turning point, say a match point when the Sports City´s Coliseum is a volcano erupting and the ball flew from one side to the other of the court to find, if not blocked his attack was beyond the limits. Even when he smashed his shot behind the nape of blockers in a display of plasticity, with reverse rotation of his torso to squeeze the short diagonal, he only managed to celebrate in reservation.

Leal was moderation in the ardor of that campus, a note of caution that was obvious. Maybe there comes the perception of Samuels. While the rest of his teammates in every positive action strutted in Mondoflex turning to face the audience and shouts of deed, Yoandy nodded silently, the same procession, but inside.

After you left Cuba, you went to the Sada Cruzeiro club of Brazil. Tell me a little about the terms of your current contract and the leap this change meant for you.

I signed with the club for four seasons, I mean, until the end of 2016 the contract is agreed. It was a great experience, hard but very nutritious professionally. To leave Cuba I had to spend two years without being able to play and that made me the most difficult things. The first year, of the adaptation was the hardest. I had to sacrifice myself to the ends and train twice as hard to regain that lost sportsmanlike manner. Thankfully, after I have seen the fruit of that sacrifice, the results on the field have recognized me as one of the best players in the Brazilian league and in the last two seasons have given me the award for best offensive player on the tournament.

What were the main reasons that pushed you to force you outing from the national team?

It was an extremely difficult decision, I meditated it a lot. The reasons are essentially the same as the one pushing all Cubans players to leave the island. In general, the lack of attention to athletes and inefficient financial remuneration according to our triumphs end up depressing us. But my particular separation was also influenced by my controversial relationship with Orlando Samuels, coach of Cuba team, who never had confidence in me, always denied my talent and said I did not have enough quality to be on that campus. With the accumulation of things, I had no choice, I had to leave.

Could we say that for the very talented generation of players to which you belong, the year 2010 was a breakthrough that has conditioned the debacle volleyball is currently living?

In that year, with a team full of young and inexperienced, we obtained for half the world’s surprise fourth in the World League and the spectacular world runner-up in Italy. After these big hits and earn the respect of the world, we all thought that the treatment and care towards us would change, we would receive some recognition for putting the name of Cuba at the top of the universal volleyball. But, amazingly, things remained the same, with no prospect of change.

The Federation two years later paid us the money they owed ​​us by these two achievements. And you cannot live like that. Despite being very young, already many of us were the support of our families and with a monthly salary of 8 CUC which was what we charged, no one would hold. So from my perspective, it was the trigger for the vast majority of that team asked to leave the national team.

But now Cuba, at least theoretically, is trying to change that kind of setbacks with the new changes that have been introduced in the sports policy. Do you think these new provisions are right?

What sportspeople other than baseball players have been signed for overseas clubs? What volleyball players materialized a contract? Believe me, so far I have not seen any. In an interview I read that Ariel Sainz, volleyball national commissioner, spoke on alleged contracts they were dealing with the Mexican League for volleyball players. Where are the results? Furthermore, it is naive to think that in Mexico Cubans will raise their level, anyway I hope they someday can go out and demonstrate the quality of the Cuban school of volleyball.

Moreover, this new policy also talks about the possibility that the national team may call for international commitments Cuban players who are playing in several of the major leagues. Do you think that is missing?

Exactly, they are flatly wrong with that. How many Cubans are playing in the best leagues in the world with a spectacular performance? They come to make three selections of high quality at least. If you join all those players, Cuba would be of the best teams you can build now. But that decision is not of us, I’m sure many would want to play again for the Island and put our country on top again.

In Brazil you’re a sensation, perhaps, the best inside hitter in the league. That has led to Bernardinho Rezende and the Brazilian Federation to try to nationalize you to have your services in the Rio 2016 Olympics: What is your position on that?

So I’ve heard in the Brazilian press that they are interested in having me. But my priority is to play for Cuba, that I have it very clear, but what happens if the Cuban Federation fails to act, do not decide to call the players who are overseas, we are required to follow our path, one has to fulfill his dreams and mine is to be an Olympic champion one day. And if not for Cuba, I’ll try Brazil.

Cuba in the recent World Championship has ended in an unseemly position as it does not reflect the actual quality and potential of our volleyball. In the distance, how do you see the national team?

Cuba has left the elite because of the volleyball officials, they are to blame. They have not done anything to try to keep their players happy. With basic care, which class athletes require and are won with, nobody would leave to Cuba or the team. But those who run the sport do not realize it.

Setter would be Raydel Hierrezuelo and Leandro Macias. As middle blockers I would place Roberlandy Simon, Osmani Camejo and Isbel Mesa. The outside hitter would be Michael Sanchez and could also be Cepeda and Fernando Hernandez. As inside hitters, Yoandy Leal, Oreol Camejo, Osmani Juantorena, Wilfredo Leon. As libero Keibel Gutierrez and trainer would be Gilberto Herrera.

If they call you back to the national team. Would you agree?

You have to wait, it depends on many things. What is clear is that I miss the Coliseum filled to ceiling, the public, family and kids in the stands, which one never forgets. That image passes through my head every day, the desire to feel that excitement by wearing the colors of Cuba, I just do not know if I can do it.