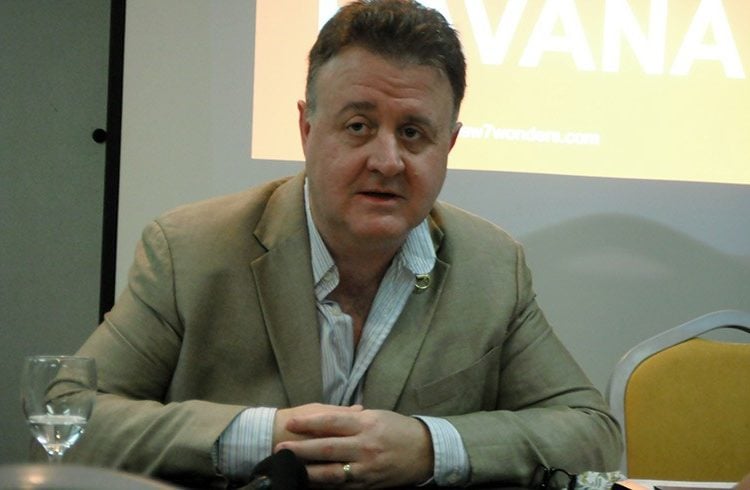 Jean-Paul de la Fuente, Head of Value Development Director New7Wonders Foundation, Swiss foundation that called the contest via the Internet to choose the 7 most beautiful cities in the world, visits Havana this week.

The Cuban capital, for those who still do not know, is one of the 14 finalists of the international competition started in 2012 with the nomination of 1200 cities in 220 countries. On December 7 we will know finally whether it be one of those chosen by millions of people in the world as “fairest of the fair”, that is, if its enthusiasts achieve exceed in quantity those of Barcelona (Spain ), Beirut (Lebanon), Chicago (USA), Doha (Qatar), Durban (South Africa), Kuala Lumpur (Malaysia), La Paz (Bolivia), London (UK), Mexico City, Perth (Australia), Quito (Ecuador), Reykjavik (Iceland) and Vigan (Philippines).

“Part of the objectives of this visit is to work on voting methods from Cuba,” said De la Fuente in a press conference held Tuesday at the Hotel Iberostar Parque Central.

He’ll be here until Thursday when he will leave after meeting with officials of the Empresa de Telecomunicaciones de Cuba (ETECSA) to assess the ability to enable voting via SMS, the Correos de Cuba company if find out if it is possible to print cards with the name of the city (although the shipping of the vote this way must be accelerated to reach the Organizing Committee by December 4) and the Ministry of Tourism (Tourism), government agency that contacted the Foundation almost three months ago.

“The Tourism Ministry has implemented a promotional campaign primarily on social networks Facebook and Twitter to encourage residents or not on the island to vote, and ongoing communication with the New7Wonders was established in order to undertake a joint collaboration” reported there one representative of that agency.

4 days in Cuba
“I have a very productive busy schedule, and looking forward to learn all of Havana,” said the British economist and publicist, who was received Monday by Marta Hernández Romero, president of the Provincial Assembly of the People´s Power in Havana, and on Tuesday by Eusebio Leal Spengler, Historian of the city.
“The historian insisted I call him from Dubai when the results are known,” said of the appointment.
“I’mhere to listen toall good ideasthat come to mind, that Havanahas an equalchancethan others tobe electedamong the 7Wondercities.(…) I also cameto study,although there are fewdays left,the only parametersthat are inCubato see how youcan create opportunitiesfor Cubanswho want tosupport itinvolved. Right now theworld isvoting, many people are voting forHavana, “he said.

Four independent studies carried out in Argentina, South Korea, South Africa and UK have analyzed what is already known as “the Wonder effect.” The results have yielded growth in tourism in the winning regions in the previous two editions: In 2007 the seven new wonders of the world were chosen and four years later a similar amount of nature was selected.

“For one reason or another Havana has appeared on many lists of many people, and that means that the city has an international profile. Participate and win this contest can have economic impact and, as you know, tourism has been an important part of the strategy of Cuba post Soviet Union to develop the country.

“A commentary rather personal: for me is very important to come to Cuba. I was lucky to meet Cubans around the world and come here is a small pilgrimage, not in the religious sense, but in the spirit of human beings, “he confessed.

Now OnCuba reproduces part of the answers given by Jean Paul de La Fuente to the Cuban press.

What is the concept of wonder that you handled?

Wonder is a word that is part of our common culture. But in our concept wonder what is really is not as complicated because it’s what people think. (…) If people think that something is wonderful, then it’s a wonder. Behind the election there is a process of awareness, training, education, and we saw it with the 7 wonders of man, which now are better looked after. Being voted a Wonder, also raises the chance.

Were you surprised by the fact that Havana was among the finalists?

No. In the first campaign many things surprised me a lot but not now that I see that when there is motivation, fondness, strength and that people are interested in, anything can happen. Watch as New York is not among the 14 or Tokyo … not all the famous metropolises are among the finalists because people are not necessarily motivated to for them become Wonders.

Do you have no way of knowing from which country is most widely voted for certain city and get to know, for example, in what part of the world Havana has been defended the most?

So … from what region did people vote more for the Cuban capital?

That second part cannot answer. We don’t want to give data or answer the question of what position are we in? because it generates a level of fight and questions about people who love our cities that we don’t want to encourage. But I can tell you that there are people voting Havana from around the world. What remains now to achieve the great goal is to Cubans to vote too, it is not enough the vote from elsewhere. We need Cuba to join the campaign, although there are now love from everyone for Havana, without exclusion.

We can tell you are informed on the situation of Cuba over the internet. What measures will be taken so that this does not remain a dream, knowing that Havana is probably one of the most disconnected among the contest finalists?

The first thing is a general comment: Cuba looks at ways to overcome these challenges. I have a meeting with the telephone company to see how they can enable the vote by SMS, or access to Internet sites. You can also vote for a postcard to be printed, and as part of a question of logistics will surely have to do the Ministry [tourism] all that should be sent to arrive on time. We are analyzing the technical problem Cuba has, but not only Cuba is offline. Because a country is connected that does not mean that all people are. It may be that only the capital is connected. There are other countries who have had the same challenge on the campaign.

You can vote for Havana here: http://www.new7wonders.com/

The last tear from Yipsi Moreno

Margallo: Decentralization will result in prosperity for Cuba