Margallo: Decentralization will result in prosperity for Cuba 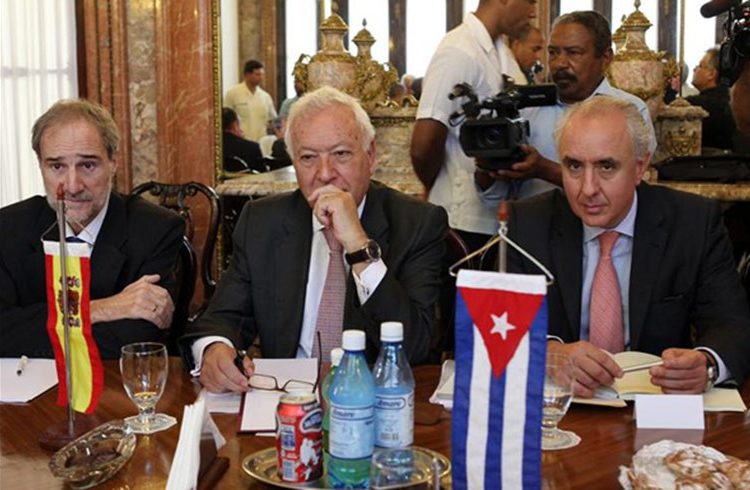 The future and eventual elimination of the dual currency is a topic of interest to more than 200 Spanish businessmen who have put their capital in Cuba.

“Spain would like a faster economic reforms initiated in Cuba, giving greater margin to private enterprise and foreign investment. Spain also wants progress towards monetary union and progress towards a decentralized decision-making, “said José Manuel García-Margallo, Minister of Foreign Affairs and Cooperation of Spain at a press conference at the end of an official two-day visit to the Caribbean nation.

Margallo opened his stay in Havana listening to the concerns of the Association of Spanish Entrepreneurs in Cuba (AEEC by its Spanish acronym), whose members held a breakfast meeting with him behind closed doors.

Xulio Fontecha, president of that organization, described to Margallo “the need for monetary union and to support the emerging private sector in Cuba,” the Spanish news agency EFE reported.

The elimination of the duality of Cuban pesos is an ongoing process through a timeline, but no known dates. The current Cuban monetary scenario complicates and hinders exports accounting for national productions, in an economy where businesses operate with a rate different from that used by consumers and self-employed in the country.

The hotel sector, in which the Spaniards have a strong presence, buys agricultural products with a special mechanism that allows them to change a convertible peso (CUC) for ten Cuban pesos (CUP, local currency).

Fontecha commented that “Spain is at a point with great potential in Cuba under the new legislation, new economic openness. And so the minister’s visit is particularly strategic. ”

AECC President took the occasion of Margallo´s visit  to suggest possible investments. “We need strong Spanish companies in the sector of the construction of industrial estates to come and do the preliminary work for us to conduct our business. That’s what’s missing for more companies to enthuse us with the issue of Mariel “he said.

The Spanish chief diplomat was received by First Vice President Miguel Diaz-Canel and his Cuban counterpart Bruno Rodriguez; and a vice president of the Council of Ministers, Ricardo Cabrisas and the Minister of Foreign Trade and Foreign Investment, Rodrigo Malmierca.

He also asked the Cuban authorities for permission to extend Spain´s consular offices and even open one in the province of Santiago de Cuba. He praised Cuba’s role in the fight against Ebola and highlighted its active presence in the foreign policy of the Western Hemisphere. “Cuba plays an essential role in the Latin American community of nations,” he said.

The syndrome of those rooted

The syndrome of those rooted

Yasmany Tomas will take his power to Arizona

One minute away from glory (or earning the right to dream)