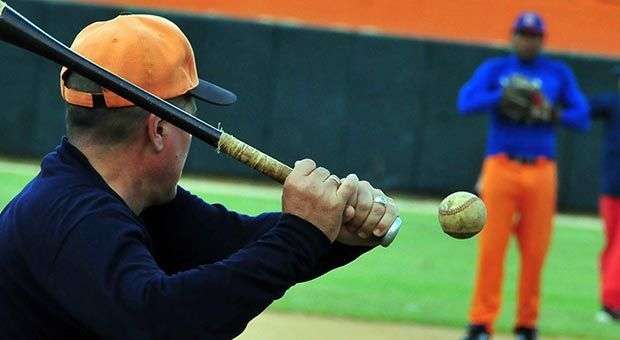 Last third, five subseries, fifteen games. That is what is left for the 53 National Baseball series to define the eight teams that will participate in the second phase. In unison, the same number of squads will say goodbye to their stadiums and will be aware of the new shirts their idols will wear from January 4, the day of the selection of the reinforcement.

The tournament so far has not been oblivious to the technical and tactical shortcomings from a long while has been afflicting the baseball on the island. We are missing the short and fast swings, which after choosing pitches wisely will cause good contacts. Bunting the ball with efficiency is a Herculean work for most and abound senseless base running. At defense scoring errors go hand in hand with those of the mind that do not end up in the statistics sheet. The pitchers suddenly lose concentration, and with it the control and appropriate selection of harmful pitches.

Obviously, the series is rich in rookies and players that in one or two preceding seasons just accumulate hours in baseball parks while the absence of established players has also marked the series from the start. This makes all those gaps to be more visible.

Beyond all these difficulties the show has taken over. Supporters nearly filled stadiums across the island and thanks to their hard struggle congas remain. The balance between most teams keeps in suspense the final result of this first phase. Venturing into predicting who the eight lucky ones will be can be fatal. More prudent is to provide some clues that have marked the daily game of each team and where their strengths and weaknesses can be in the face of these final five subseries.

Isla de la Juventud gets to the last third perched on the top of the standings with wonderful balance of 20 wins and just 10 losses. Seconds in collective batting average (.284), their offense was led by Michel Enriquez (.353, 4 HR and 19 RBIs), in addition to three others batting over 300. Their pitching staff behaves at high altitude, direct participants in a considerable percentage of successes.

Undoubtedly the greatest virtue of the current leaders of the series lies in the remaining unbeaten at home in the Cristóbal Labra stadium. After the last sweep of Mayabeque they are preparing to receive Artemisa, culminating presentations as home club, where until now they exhibit excellent balance of 15 and 6. The four remaining subseries they will play on the road, uncomfortable situation but at this point it will not compromise its progress to the second stage.

Just a game behind is Pinar del Rio Cuba (19-11). Their pitching staff is the best in the championship (2.40 ERA). Separately, starters and relievers are also placed in the highest place of the indicator. Besides that they show the best rate of strikeouts and walks (1.88). Between July Alfredo Martínez, Erlys Casanova, and Vladimir Baños and Yosvani Torres added 15 wins and 4 losses with 110 KO and only 45 walks in 172 innings. It is another team who can now be assured of its presence in January, despite the difficult closing awaiting them against Holguin, Matanzas, Villa Clara and Santiago.

Precisely Matanzas (18-11) and Holguin (18-12) occupy positions three and four of the tournament. The Victor Mesa’s team stands out as the number one in batting average (288). From the mound special mention for rookie Yaniel Blanco who has six wins and one loss. The eastern Cuba team continues to amaze many with its performance, for others expected if we study carefully the characteristics of its roster. If harmoniously combining the three essential elements of the game ensures a considerable percentage of success on the field, they steal the show. They are third in offense, defense and pitching. Difficult: the final against Pinar, Matanzas, Mayabeque, Villa Clara and Industriales, all immersed in the struggle for qualification.

Villa Clara (16-12) has managed to avoid the unexpected ups and downs of its pitching staff, and they go fifth. Just recently they had a pair of wins against Santiago. The good work of Luis Borroto reappearing in the last game is an incentive for the current champions and representatives of Cuba in the Caribbean Series 2014.

Industriales (15-12). Momentarily was out from the group of eight. Luckily for its fans during a visit to Artemisa they smiled twice and climbed to the sixth position. Vargas has tried any number of line ups, but the collective slump is maintained against all logic. If you consider that in the last subseries their young pitchers have started to decrease the effectiveness of the beginning, there seems to be reason for concern. If they take advantage of upcoming engagements against Guantánamo and Camagüey who are the bottom of the standings they may secure their ticket to the second phase.

Santiago, Artemisa and Ciego de Ávila share places 7-9, all with the same balance of 16 and 14. Santiago made it out of the slump that afflicted them and recovered important players who were injured. Like its eternal blue rivals they are required to capitalize against the last-place Santi Spiritus, Camagüey and then other remaining series that seem complicated: Artemisa, Pinar and Matanzas.

Having quality starts from Miguel Lahera , Yuliesky González and Jonder Martínez will be key to the aspirations of the Hunters. The poor offensive production of its line up leaves them no alternative. In the case of Ciego de Avila they present the best result among all home club teams (12-3 ), but away from home they have been really bad (4-11 ) . If they keep the pace at home in the next three subseries and earn better dividends on their visits to Matanzas and Villa Clara they can make it to the second stage.

Mayabeque (14-15) and Las Tunas (13-15) are only 1.5 and 2 away from qualifying teams, respectively. Between them I believe that only Las Tunas has chances of advancing to the second part of the series. Vital: increased offensive productivity allowing Yoelkis Cruz, Ubisney Bermúdez and company breathe.

They seemed destined to take the place sixteen after completed the initial third but silently, they have been climbing up and now are placed in the twelfth. Cienfuegos (13-17) is increasingly making efforts to approach the leaders, they have nothing to lose and seem motivated. I do not think it will be enough, although I’m sure they will end up deserving applause.

The rest is just waiting for the selection of reinforcements to know how many of their players changed jerseys in the New Year. Granma (11-18), Guantanamo (11-19), Camaguey (10-20) and Santi Spiritus (9-21) must be satisfied in these last fifteen games to harm those who continue to struggle for qualification, and try not end in the cold basement.

Cuba will grow 3% by 2014 and will maintain trend of previous years, according to ECLAC