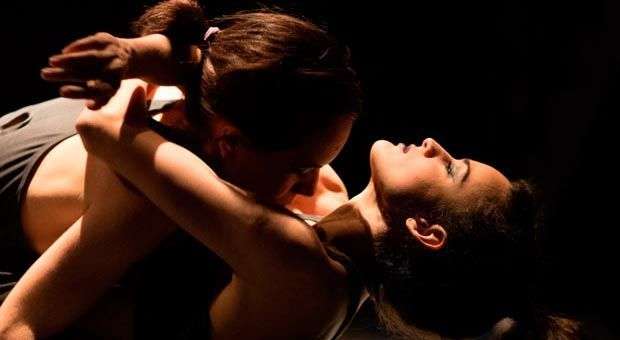 Unexpectedly, Antigonon, the last work of El Publico Theater, starts with two poems of Martí, one of the Free Verses – El padre suizo- and another from the Single Verses – Sueño con claustros de mármol. They both have a long and devastating epic resonance. When asked on how the apostolic Martí still survives among us, it strikes me that at political level there is primarily a mimetic reproduction of the tone, of the exalted form, but in Antigonon we witnessed a thorough dissection of the poems, as if they had torn the nineteenth century garb and before that sacrilege there was no other choice but to wear the saint with what we have at hand: a lycra, a G-string, rapper clothes or a school uniform.
But the saint is dressed, and that’s what matters, and is dressed in the contemporary style, for viewers to love or just recognize him better. Taking the Free and Simple Verses to the lower strata of Cuban identity (things that still brings us reluctance to recognize as Cuban), we will know then that if Antigonon would have undertaken a search, this search would not be the conversion of our situation in a phraseology and obviously an epic battle, but in the admission of our current heroes. S ublimity shows us in such a ways.
Cubans lexicon, in the struggle, surviving, in battle, in hard times, which remains the same, obviously refers to another deed, but Marti is a pretext, Antigone is a pretext, the classic is a pretext., a ll starting point is a pretext for a journey. Antigonon as a journey, i ts scenery, costumes, the waist wiggles, the characteristic paraphernalia and mobility of El publico Theater as hooks, as cunning strokes.
What seems to be behind this production is a large and growing monologue; is, if it does not sounds too sacrilegious, the chatter of a country going through its trauma, i ts pioneers, the illegal thug, the ex-convict, an old ailing woman who is the Fatherland. The dialogue with the Homeland is direct, constant; Homeland is called austere, frugal, with nothing, a naked nation; a country that however does not inspire rejection in people who can really love it. Cuba’s dilemma seems to be this : people who can save the country do not know they can do it, or people who are truly followers of Martí are unaware that they are the real ones, and not those who mention him at every step.
But why are they real followers of Marti? Is it just because they never name him, or because they do not use his name in vain, or because their sense of struggle, of going out to take everyday’s risks is an act common in Marti? I believe I can not answer such questions. I do not know if we have assumed and metamorphosed Martí as not to realize that he always accompanies us or if we have not assumed him at all. The work gallops, almost invariably, between the sacred and the secular, like a crazy compass needle, as the abandoned direction of a missing ship.
However, there is a moment, a liturgy: Linnet Hernandez, one black woman shaved and naked, with her ​​dark nipples, a tobacco in her mouth, her body carved in wax, as if she had been heated, half an hour before, in a bush in fire. Hernandez’s monologue is the vivid sweat of Mariana Grajales. I do not think that epic topic to provoke laughter. Hernandez performs what Cubans need to see because she says that the blood was bleeding from her vagina, her tits, and every sentence of the actress, each already preset code (every creation is a cliché) for the hype and hubbub, in Hernandez turned us the nuts and drove us to silence, “where heroes rest in divine silence.” In her gestures and sacrifice, in her deep interpretation, Cubans glimpse the metrics of what is bad spoken, the Homeric germ of our vulgarity.
Just at the beginning of Antigonon someone says: “statues indeed wear out to those who work them .” It seemed an ecumenical idea to me and from there I assumed that there was really a study of pretexts in the play (of Antigone, obvious, and Marti). Who works the statues? Obviously, those who are not the statue but somehow kept a rare connection with it because his statue is intangible and consecutive, he does not have time nor form to sculpt it, and also knows that there is nothing worse than making a statue of yourself or expecting for others to sculpt it. But every statue, Marti, for example, was in turn an intangible and consecutive statue, with no time to be sculpted. Let’s recall here that, like poems of the beginning set the tone, we are talking about living statues, stones which you can approach “for marble men to jump from their bases”.
The contempt just for the sake of it bores, especially bores: for its lightness, opportunism, and proliferation. But Antigonon´s contempt enables it to find what Rogelio Orizando, writer of the play, calls our Antigone: Panchito Gómez Toro , “that boy who did not reach thirty years (in fact, he was only twenty-one) who stays with the body of his general (Maceo) and who commits suicide for his body not to be profaned.” With the letter Gómez Toro writes to his parents (written in a calm that today is still thrilling), but even more for the myth and history, Antigonon closes, accompanied by images of El Cacahual, an imposing anvil of … marble? erected in memory of Antonio Maceo and his assistant.
We are not heroes, and we may never be one, because epic is a circumstance, but in some strange way we are the anvil too.

Notes for radiology of the Cuban countryside