Blatter and the unspoken words 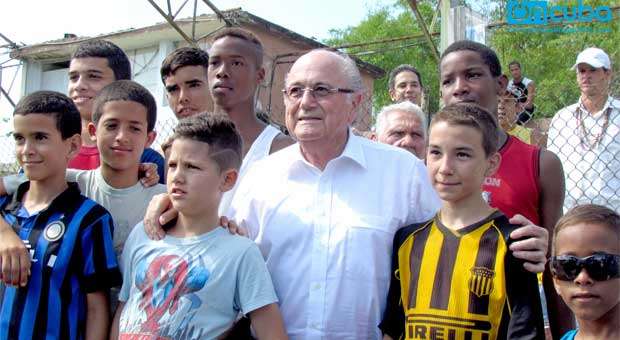 Joseph “Sepp” Blatter is not Jay-Z and doesn’t either have an opulent girlfriend like Beyonce, but his visit to Havana also caused a stir, especially in the world of sports in Cuba which is not so used to this kind of guests.

We speak of a man linked to football as a member of FIFA for almost four decades and president of it for the last 15 years with four consecutive terms. A survivor who has repeatedly pointed at by corruption scandals, bribes or vetoes, and revered for bringing the World Cup for the first time to Asia and Africa, as well as using the sport as a catalyst for understanding among peoples under the slogan “pure football, pure hope.”

Taking all this into account, the press in Cuba rubbed its hands with the arrival of an icon, that beyond his innate neutrality has the character of an of a Swiss Army Colonel, that in football matters he is usually both measured and relentless, almost always with an ace up his sleeve.

From Haiti, he arrived in his private jet and made a lightning tour of just 24 hours, sometimes public, sometimes secret, because some of his conversations (I suspect the most transcendent) remain and most likely will remain with the damn “top secret ” written all over.

However, the start was not bad, even hopeful. He said he carried Cuba in his heart, that he appreciated our support in adverse situations, dined with Cuban officials and gave us an award by honoring the advancement of football in the island

He regaled us with fine words in perfect Spanish, because Blatter simply cannot behave otherwise, he is one of these almost extinct kind of officials within our borders, friendly even he denies you something, to the fullest extent a true diplomat. This he showed the next day in the La Polar stadium, where we will have a synthetic pitch in the coming months, but for now is as artificial as our own dreams.

There he chatted with veterans, joked about his age, was photographed with everyone, took off his coat, held in his hands a shovel for the first time in who knows how long, removed the land and stated that works should be started immediately, subliminal message the experts and those involved must capture…

Then, at the National Hotel, he showed more of the same. He had a perennial smile, a flood of messages of hope and praise for our sport, especially because we practice football not only to compete, but as a school of life.

But (I hate that there is always a however), there are still some loose ends, because the fact that there was almost no reference about the defections after Sepp described the matter as “serious” a few months ago gives much room for speculation.

“It’s not just an issue for the Department of competitions (FIFA’s), but a presidential issue I will raise in person to the sporting authorities in Cuba to have it forwarded to its political authorities,” he said in Geneva months ago visibly concerned about an uncomfortable and unpleasant issue for all parties.

So, cant we safely assume that the issue was brought up during his visit? Is it not fair to assume that he expressed his opinion and discussed it with Cuban authorities? But none of this happened, at least not in public, because it is certain that Blatter did not come to vacation and debates arose at some point.

The FIFA honcho had scheduled a meeting with Vice President Miguel Diaz-Canel with access to the press, suspended or rescheduled mysteriously behind closed doors, with very few details, except that was attended by Army General Raul Castro, President of the nation, accompanied by other sport officials.

Behind the scenes, they also evaluated the destinations of the funds allocated by FIFA, and discussed t the defections, I sense there was no immediate agreement. I guess they couldn’t find a solution tailored to the needs of the Cuban soccer despite Blatter’s military intransigence in negotiations.

The proof of that, I think, can be found when Blatter was asked about, he only managed to move his head and Luis Hernandez, head of the Cuban Federation took the baton and delivered a speech without any hints, blaming the defections to the policies of the United States.

Bravo! That was probably what many of those officials that do not look like Blatter and swarm in every corner of the country said, just ignoring all the damage it has done to our sport, not only illegal outflows but domestic policy that motivated it because we cannot simply say that they are traitors without analyzing other large number of mediations in the matter.

Sure, there is a remedy, it is just a matter of finding it, accept it and practice it, something apparently very difficult in Cuba, where we are reluctant to the expansion and development of players in higher level tournaments, where they have the opportunity to test their qualities.

Perhaps Blatter didn’t have the perfect remedy, but he had an idea, which by all accounts was unsuccessful, at least temporarily, so that his trip ends with many smiles and few answers.

Underground Economy: from the streets to the web

Cuba Says Good-Bye to its Man of the Blazer