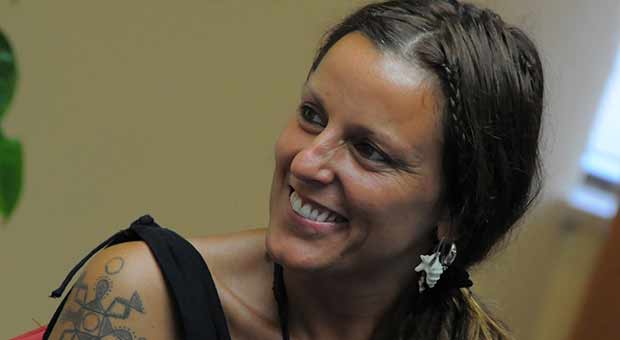 In one of Cubadisco 2014 most awaited performances, the Spanish band Chambao will interpret two songs by Carlos Varela and the mythical Gnome will sing two songs by the famous group from Malaga.
María del Mar Rodríguez, better known as La Mari, is ashamed of saying Varela will perform with Chambao, because sharing the stage with this urban poet is an honor for her band.

So far, she stated she will interpret Varela’s Habaname and Bendita lluvia, a song that she described as “joyful”, though it is hard to relate that word with the work by the author of Guillermo Tell.

In addition, Chambao will be accompanied by the legendary Cuban tres player Pancho Amat, which is a pleasure and a surprise for La Mari, who loves this instrument thanks to Cuban Oliver Sierra.
MusicianOliver Sierra usually takes part in her album; he played the tres in the track Roe por la escalera, in the album Pokito a poko (2005), which pays homage to Spanish band Tobleton.

La Mari told OnCuba that the tres has the leading role in that song, and an Argentinean musician imitates the Cuban way of speaking, something that came up during the recording of the song and it worked.

Sierra, who also plays flamenco guitar and bass with Chambao, adds the Cuban touch La Mari enjoys so much, a feeling she had even before she could understand it and had her wishing to visit to Cuba for several years now.

“We always wanted to come, but it had to be on the right moment and that moment is now: this is the best moment for Chambao and for Cuba”, noted La Mari, who was given a Cubadisco International Award.

She promised two hours of good and varied music, “a small tour through our career”, for celebrating their visit to Cuba and getting in touch with an audience culturally similar to the Andalusia one.

La Mari didn’t ruled out joint musical projects with Cuban musicians as she had already collaborated with Chucho Valdes, her neighbor in Malaga, who opened Chambao’s album with the song Al aire.

“Whatever is to come, please come, the Cuban music doesn’t begin with a trip to the island; it has always been there, everywhere… There are many musicians that make you wish to stay by their side absorbing their knowledge as a sponge. There are huge figures like Van Van, but there are some others that simple get your attention”, she explained.

She is always smiling, but she doesn’t like to be frame in flamenco. Though as every honorable Spanish citizen she respects it and understands it deeply, she acknowledges she comes from a different generation with different interests.

Perhaps, that’s the reason why, it would be best to take her advice: forget about tags and fully enjoy your work. At least she has already started having fun in the rehearsals at Adbala records.