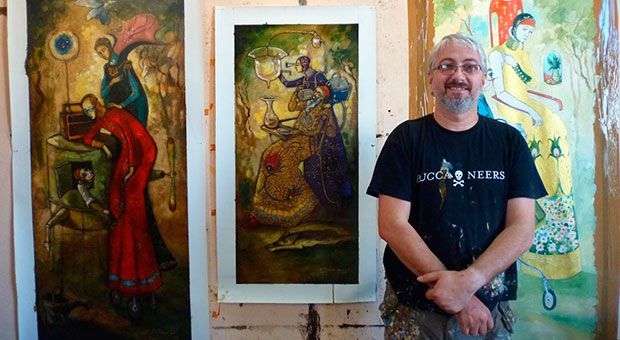 The Cuban painter Carlos Guzman experience with dreams of the alchemists in his most recent paintings in a series dubbed The elixir of life, which he will present the coming June 20 through July 12 at the Mart Gallery in St. Petersburg, Russia.

The creations give continuity to a display at the city of New York, United States, last April, with the same theme, collection not at all alien to the spirit and the belief system of this painter, draftsman, sculptor and illustrator of publications.

“The elixir of life was already discovered,” he says with the same serenity he dedicates to the paintings.

“If everyone analyzes itself, tries to find out who he is, what their problems and defects are, overcoming an error, improve behavior and convey favorable communication energy, they will reach happiness,” the artist argued. The particular view of Guzmán on this topic includes always doing good, treating others with respect and turning negative energy into positive, for it leads to this unique elixir of happiness.

By looking at his paintings, the viewer perceives a certain attraction to the chivalric romances, intrigues in courts, the life of minstrels, alchemists and inventors of past centuries with their doubts, searches and assumptions about the nature and the universe.
Like most Cubans born in the second half of the twentieth century, Guzman admires Russian culture since he grew between objects and cultural concepts from that nation.

“My dad worked in a military unit together with Russians and all weekends they used to go in a caravan to the beach and made large banquets, typical of Slavic idiosyncrasies. Moreover, I always liked the illustrations in the books and I loved their cartoons, I’m a lover of Russian cinema, especially Tarkovsky . Also, I grew up in a time when we ate Russian meat, had their jam as snacks, it was normal to have a Russian radio, fan, washing machine. Everyone in that generation of the ’70s owes much to the culture because we virtually lived in Russia, without the cold, “he said.

When he finished his studies at the San Alejandro Cuban Academy of Plastic Arts, Carlos tried to raise the level in homologous Russian school and passed the enrolment exams, but with the fall of the socialist camp that year (1989) the links between institutions disappeared and the trip never happened.

Guzman style crosses over the medieval Renaissance Europe and then to the Caribbean and multiracial Cuba, the ideas for many of the creations come from childhood, tons of stories and family beliefs.
“Many images are linked to stories told by my Spanish roots peasant family, and they were stories about witches, inventions to transform objects or substances, turn stones into gold for example, or the supposed location of hidden treasure or equipment to facilitate search of those fortunes. Whenever we got together at night, someone told those stories, “He explained.

For further enjoyment, on the farm of his grandparents in the province of Villa Clara, they found one of the famous treasures under a rock covered in mold. When his father was a child, he used it as a pedestal to jump into the river and one day a man with a metal detector arrived and proved that this boulder was a ball of wax which had hosted gold doubloons, jewelry and other antique pieces.

“I feel indebted to European culture and Cuba influenced greatly in architecture, art and lifestyle productions,” the big boy that years and passions took him into collecting toys of great making.

In his studio, located near the intersection of Oficios and Obispo streets in Old Havana, Carlos works surrounded by miniature trains, trucks, fire trucks, cranes, buses, a helicopter and a shotgun that he couldn’t trigger as a teenager due to the shortages typical of that time. That fictional weapon, laying on one of the walls of the workshop, symbolizes perseverance; as the restless child pursued for decades to capture a copy that due to time and other incidental cost him 80 times more than the original price

For Guzman machine is inseparable from man, in his works he includes various artifacts such as pieces of watches, radios, compasses, phonographs, old movie projectors, lights, washers and antique instruments for physics and chemistry laboratories.

However, he says he is aware of the transitory value of the material because when humans travel to other spaces there shall not have the same meaning for others.

“One cares about a lot of material things in the end they will stay and be detected by others, but we are at least grain of sugar in the middle of a vast sea, when we realize that we will have more clarity in life,” he said .

Many objects, symbols or forms do not appear to the naked eye in his paintings, but Guzman scenes push the detail in a world where fantasy mingle without limits and past times, Renaissance adventure, naturalists budgets and signs of Freemasonry.

“One takes to the painting a lot of metaphors, symbols, stories that hide messages or other stories. As I paint I like to hide, put tracks to the spectator, and anyone who has read a bit about symbols may discover, and I speak not only of images but of numbers, “he revealed.

Sometimes we need to look hard to spot them, but they are, and some characters seem hybrids between different living beings or some of these mysterious artifacts that plays with the idea of transformation, is much appreciated by Carlos.

Paradoxically, he hates cell phones and ensures that just sits on a computer, he is not interested in editing programs, design and other related arts, he is scared by the very modern technology because, in his view, the artifacts should support the man but not dominate him.

“Young people today are very aware of the technologyl, games, video games and man must devote a little more to it, to interact with nature,” he said.

According to Guzman , technology consumes humans and often pushes him away from the true path of happiness, which is really feel comfortable with yourself , be indispensable to others, to live in communion with the next beings and with nature itself.

“As an artist I need to draw, get dirty, taste the paint, I prefer doing things with my hands and I don’t criticize the artist that needs new technologies for work, because they are also tools ” admitted the professor of drawing, illustration and painting with works in galleries and museums in Austria, UK, Argentina, South Africa, Portugal, Brazil, Mexico, Spain, France, Holland and other countries.

After exhibiting in St. Petersburg , Guzman will leave for the Principality of Andorra , to participate in the fourth edition of the international forum ” Colors for the planet ” , organized by Unesco . For the first time, Cuba will have a representative at this event and Guzman was chosen by the National Council of Plastic Arts of Cuba and the international organization. Artists from five continents will create works in situ to be rotated by galleries and events as decided by Unesco .

Guzman workshop occupies a floor of a colonial house provided by the Historian of the City, Eusebio Leal, to four greats if plastic arts to carry out their works: Pedro Pablo Oliva, Zaida del Río, Angel Ramirez and him.

The entrance to Guzman area shows sketches of some of the figures in his world and a modest collection of typewriters and film projectors which are several decades old, however, he insists at all times in the purification and mapping of energy.

“When you cease to vibrate according to nature is terrible, the more we get from it the worse it is, because only in the vicinity we can appreciate what we really are,” he said between cups of coffee and strokes.