lidia-hernandez
in Technologies of Communication and Media
0 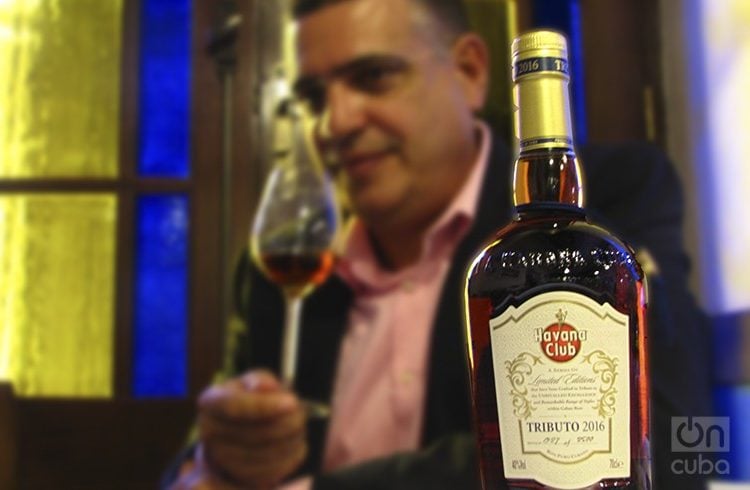 “The taste and smell of the rum of Cuba is only achievable with the fruits that grow in this land, with our humidity, the climate here, and the human ingredient that puts the definitive touches into making the drink. These will be the ingredients of the formula that is more intuition than pure maths,” Asbel Morales, one of the seven master Cuban rum-makers assures OnCuba.

In presenting the new rum Tributo, the Ultra Premium 2016 edition, Morales talked of Havana Club like talking about an alchemy thesis.

The year they will only produce 2,500 bottles, a thousand to sell in the Cuban market and the rest to sell in other parts of the world at a price of 350CUC. Up to now they have produced bottle number 27.

Tributo was exhibited at the XVIII Habanos Festival. This was not a happy mistake of fate, but a careful choice made because of the natural relationship that exists between Cuban rum and tobacco, two cultural expressions of the island. For that reason the drink can be combined with cigars that range from medium to strong intensity, like Partagás, Romeo and Juliet, or Cohíba.

The name of the new Limited Edition Havana Club is a “tribute to the way of making Cuban rum, the variety of flavours and the smells that characterise it, and its excellence. Is it also equally a tribute to Cubans,” said Morales.

This batch is born of the finest white rum barrels from the factory, which have been used for more than 80 years. It has an aromatic taste with notes of dried tropical fruits, and a dark amber color.

“It is a rum whose aroma is easy to appreciate, which is characterized by its lasting presence on the palette, and that is smooth to drink,” said Mirelis Acosta López, Head of Marketing and Communication at Havana Club, told OnCuba.

Each bottle is an original, which makes of it an artisanal product. In Cuba the knowledge, or the memories, as they prefer to call it among one another, of the master rum-makers is passed on from one generation to another.

So, although machines and modern technology are involved in the elaboration of the drink, in the measurement of the percentages of each component, it is the human hand, the Cuban hand, that prevails.

It’s the masters who decide which barrel to use in each base, what does into the mix to make the rum, when the rum is ready to be drunk.

The new 2016 Limited Edition is also a tribute to the Cubans who for centuries have produced a rum that is enjoyed all over the world.

Camaguey will have a railway museum

Who made the Habano Man?