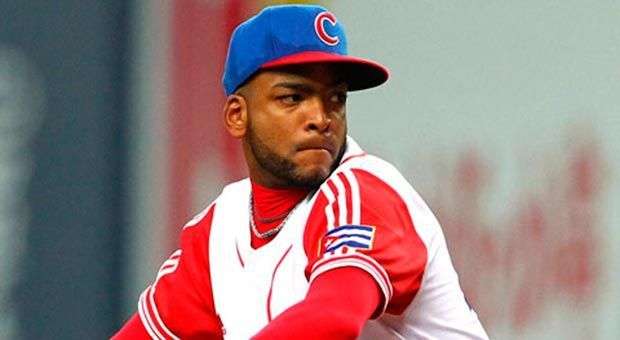 There were several weeks waiting for his debut in professional baseball. It happened on Sunday in the Mexican Pacific League. Havana’s pitcher Odrisamer Despaigne debuted for the Mexicali Aguilas in a game against the Navojoa Mayos.

As reflected in the official website of Mexicali, Despaigne was the starter of the match. He performed four scoreless innings, allowing two hits, with a pair of strikeouts and the same number of BB. He left the game with a 1-0 lead, but the end result favored Navojoa 6-1. The Aguilas are second in the standings of the circuit, escorting the Hermosillo Naranjeros. In the roster of this franchise also appears Villa Clara’s lefty Misael Siverio, with good performances in his outings to the mound.

On June 29th, Odrisamer left the national team that went to the Netherlands to take part in the traditional tournament in Rotterdam. The stopover on the Paris´ Charles de Gaulle airport was the moment chosen. He then moved to Spain to meet with his father, Francisco Despaigne, whom he had not seen for eleven years. Francisco was pitcher for Industriales squads in the decades of the 80s and 90s of last century. Another of family that integrated teams of the capital, Metropolitanos in this case, was Odrisamer´s uncle, Juan Rafael Despaigne, also pitcher.

While in Iberian lands, the Industriales pitching staff ace in recent seasons in the Cuban League remained training in Viladecans stadium, in Barcelona. There he was visited by several scouts from MLB clubs, including the Phillies, Yankees, Red Sox, Braves and Mariners.

In October the Puerto Rican Jaime Torres, Odrisamer´s representative, had confirmed that the Cuban had just get the free agent status and he only needed the permission from OFAC to clear the way for a future contract in MLB. He also announced the trip to Mexico in order to appear in some official games before major league scouts, as happened this weekend.

In Cuba Odrisamer accumulated 67 wins and 44 losses in eight National Series. He had a 3.60 ERA and opponent average of .261. He totaled 692 strikeouts in 976 innings. He won the title with Industriales in the seasons 2006 and 2010. Earlier this year he joined the national team that participated in the Third World Baseball Classic, although there he did not appear in any of the tournament games.

“I’ve won titles with Industriales, I played a World Classic with Cuba and now I need new goals, so I left my country to fulfill the dream of playing against the best in the majors,” Despaigne said in an interview in Barcelona a couple of months ago. The debut yesterday in the Mexican circuit was a step to achieve it.

Jazz Plaza 2013: jazz universe with so Cuban an origin

Armando Nova: “In the agricultural sector productive forces are still held back”

Armando Nova: “In the agricultural sector productive forces are still held back"

Pablo Milanes : " We are suffering a crisis in the use of our music genres "