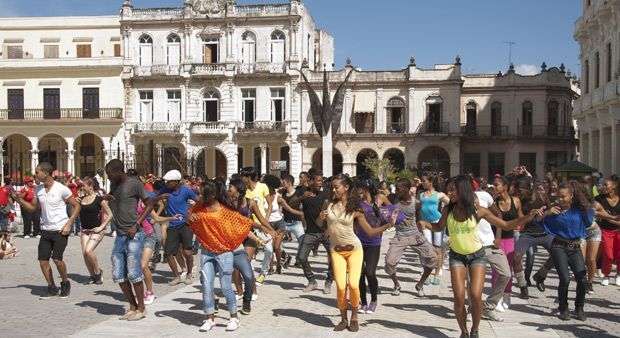 Leo Brouwer Chamber Music Festival does not wait for the public; it gets out of the theaters and goes after it. This happened during this fifth edition where street performances of musical and dancing groups have taken place, a social phenomenon that currently has large international development and it is called flash mob or instant crowd.
Although flash mobs occurred in Havana by these days differ in some respects from those occurring in the world, for example, in the means of calling , as in other geographical areas social networks are used for this purpose, but they maintain their essence when the participants surprise people in public spaces with unusual actions, fulfill their purpose and then quickly disappear.
Those who were in Saint Francis of Assisi Square in Old Havana, on October 8, must have been astonished by the appearance of the members of Ars Longa ancient music group who, without further requirements than their musical instruments, played pieces of their repertoire, which includes works from the Renaissance to Baroque.
“Have you ever listened to old music in a square? No, I’ve never seen that, but it seems very original to me, I was passing and stopped out of curiosity, I did not figure out it would be something like that, in fact I do not know the reason for this presentation, what matters is that I liked it, and enjoyed it, “the young man Carlos Sarmiento told OnCuba.
Ars Longa offered several concerts during the Festival at the Avellaneda Hall of the National Theatre of Cuba and the former Church of San Francisco de Paula, but what happened to its members at Saint Francis of Assisi Square was special. Although they were concerned about the acoustics and the welcoming of the public in a space so open like that, they were satisfied by the successful communication with the audience and the admiration samples they received.
Another of the flash mobs occurred during Leo Brouwer Festival were those performed by Rakatán Ballet members and students of the National School of Dance in the Old Square of Havana Historical Center and the busy corner of 23rd and L Streets, at El Vedado neighborhood, in this capital. These especially reminded me, relatively speaking, to what occurred during the live show of Black Eyed Peas in Oprah Winfrey’s TV program, where thousands of people surprised the presenter through a choreography of the song I Gotta Feeling, which video went around the world through dissimilar media.
Returning to Cuba, I tell you that at Old Square, despite the midday sun was already burning, many people stopped to appreciate the movements of these young people who infected them by their rhythm. According to hat Venezuelan Aixa Fagundes told OnCuba, she was about to get into the choreography and start dancing.
–           And why did not you do it?
–
– Because my companions did not allow me to do it .
–
-“Indeed, everything was conceived for the public to interact with us, so we set up moves that were catchy and somewhat simple to make, but without losing the seal of Rakatán” dancer Ana Aylén Salazar said. “Some did not dare to join us, but others did it and I think that both we and the audience had fun, we sweat a lot, spent a lot of energy and transmitted it to them. Without a doubt, it exceeded our expectations. In addition, we are very happy because we can see how we are taking steps forward with respect to what happens in the world, where flash mob occurs since long ago, “Elena Avila added.
–
–          “I had never been so near to a show like this, but I tell you that I like it more than those in the theater, because you can one feel closer the joy of artists, it looks more natural and spontaneous ,” José Caballero, who enjoyed the show at 23 and L Streets with his wife, stated to our magazine.
–
Other busiest areas of the city as the corner of 23 and 10, also in El Vedado, and the Paseo del Prado hosted flash mobs featuring ¨Ensemble Alternativo¨ in a festival that has favored in each of its days the perfect pairing of intelligent music. And although in Cuba we did not see a group of pregnant women dancing in a square as it has happened in London , we did appreciate how a flash mob can temporarily stop traffic, as it occurred in 23 and L on October 11th.