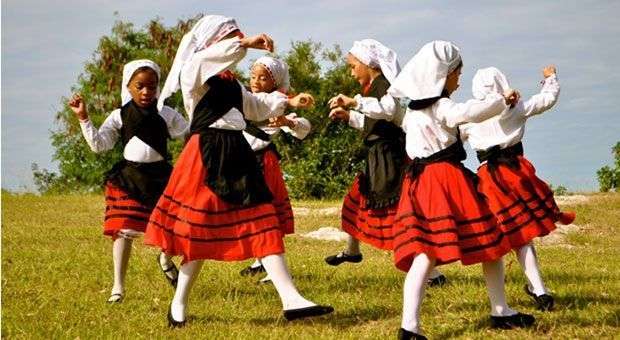 October 12, the date traditionally marks the arrival of Columbus in America, promotes the Day of American Cultural Diversity for historical reflection and intercultural dialogue on the rights of indigenous peoples.

Eme Alfonso comes from a family that has explored the roots of what is known as Cuban. Her mother and father, extracted from peasant essences, first in the vocal quartet Tema Cuatro , and later in Sintesis, a group from which for more than 3 decades have unraveled the Yoruba . But she has undertaken her own way, not only as a songwriter, but as a Cuban seeking legacies that shape our miscegenation.

In her search, she recorded her second CD; Eme Alfonso. The CD is under a license by the Colibri label since2012, but has not yet been edited. While waiting for the depressed Cuban recording industry, Eme proposes a new project: To mix (Para mestizar)

Under the title of the third track from her CD, with lyrics by the troubadour Pedro Luis Ferrer and her music, she recorded Cuban music cultural diversity of the island, on a project documentary video clip that discovers communities in Havana, Mayabeque , Matanzas , Cienfuegos , Ciego de Avila and Guantanamo, where they keep their traditions alive .

Eme documented descendants of aboriginal , Spanish , African , Haitian , Chinese , Jews , Mexicans, Puerto Ricans , Arabs, Americans and other Europeans , who received her with her team, and are recorded in the video clip of the same name , directed by Joseph Ros , which will be presented on Monday, October 14 , at Cultural Center Beltolt Brecht ( 5ta y 94 ) , at 2:00 pm

For this project she had the support of UNESCO, the Cuban Institute of Music, the Swiss Cooperation in Cuba (SDC), and the Norwegian, French and British embassies, as well as cultural counseling of the Embassy of Spain and Spanish Agency of International Cooperation for Development (AECID).

Why this CD now?

We look for support in American culture. They are so proud of their roots, they tell their history like a short story. We do not. We always start with the same things. I thought how the research Sintesis made with its Ancestors albums changed the point of view of young people on Afro-Cuban religious culture.

I spoke to Peter about that. I told him my family’s history by, my Chinese, Spanish and African great grandparents, I wanted to dig into the issue of miscegenation. He has many similar songs and even a theory that Cuba is doubly African, by the Moors who came through Spain and by the Africans themselves. So went the song.

What about the project? How was it born?

Then I didn’t have it in mind. But we started to sit on a video clip. I knew that I didn’t want to show up singing and started wondering many questions. Interesting things came up and we got serious and make it big to not end in public areas.

What did you find in the search and registration of these expressions?

I discovered that I have many more questions. When you think you are going to answer something, you start to have a much larger questionnaire.

We have a long way to go. This is just the beginning, as far as we could get … But it was beautiful and a project that left a mark on all of us because we learned things about Cuba that are not in the books. It was also a risk because we arrived in places without being sure what we would find. But this country is what it is for a reason.

We found very interesting people, very willing. They keep their traditions because they have them in the blood, because those are their ancestors and they respect them. Most do it out of their work time and with many difficulties.

Also, we Cubans are pure joy. There’s nothing invented or disguised or anything, those are their costumes and their cultures. They are happy.

What was the most difficult experience?

Yateras; because there are not even roads to get there. On trucks that transported them usually, we moved all the equipment.

You present the video and project amid They create Cuba, a festival to celebrate and claim the female cultural creation, what do you think?

As I have not been to Cuba, I’m not aware of it. But I was talking to Pablo Platas and he told me the purposes. It remains to be seen if it meets the goal in Cuba. After the first edition, people will have a first look. But so far I feel it is good initiative that includes a lot of different projects that promote the culture made by women.

Making a documentary. This is like a trailer. It is the beginning. We have a lot of material in photos and videos that we did not use within 4 minutes. It was 15 days of filming and we have a lot of information.

I imagine that Joseph will make a making off and then try to put the project to someone who can sponsor the documentary to update the information available that is from the 80’s, 90’s, and very cut and paste.

Para Mestizar has an informative character. I think it achieves its purpose in the first phase with 4 minute clip. It is a very powerful video. Now I’ve seen it with other eyes, as one who lives it all over again. It is a very cheerful video against underground language of poverty that is hard, sad.

However, we must dig deeper. These communities are victims of sexism, gender-based violence, racism. We should talk and think about how to influence that. It will not be only collecting, but leave them something. I know that from the official discourse, it is said that in Cuba there is no racism or gender issues … But what I saw in some communities, in others much less, in others, in other yes … Everything.

You are planning a festival, the Havana World Music that not only you lead but arise from Para Mestizar

The details you will have them on Monday at the launch of Para Mestizar. I promise to give OnCuba the scoop.