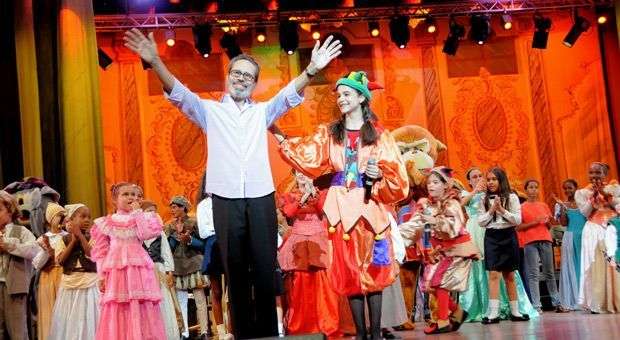 That moral of Edouard Laboulaye translated into Spanish by José Martí that knowledge is better than strength, can be used to describe the V Leo Brouwer Festival of Chamber Music. The event, which ended Sunday, has been able to show an exquisite selection of the repertoire of each concert, the quality of the performers that participated, and the cosmopolitan way of seeing the sound and in combination with all the arts.

I thought about it this Sunday when, at the close of the V edition of the event, the children of the theater company The Beehive recreated that wonderful children’s story reflected by our Apostle in the pages of The Golden Age magazine. With a clever choice of music and remixing the story Menique, the troops of Carlos Alberto ” Tín ” Cremata put a spell on the audience gathered at Havana’s Karl Marx theater , and thus gave us an essential lesson : good art is enjoyed to fatigue.

Although I must admit that Cremata version had some changes in tune with the times, it had a plausible answer in the auditorium, which succumbed to the vicissitudes of the protagonist and their ability to overcome the most difficult challenges.

Along with Menique and the rest of the characters shone music as essential character. In that René Baños, music director of the staging, and Jorge Orozco, who ran with the melody incidental, had much to do with.

Several classics of the national repertory were introduced in the story as a valid way to not forget them ever. So, were heard in the nearly two-hour show songs like Son de la loma, by Miguel Matamoros, and Hachero pa’ un palo by Arsenio Rodriguez.

As a special time of the Sunday evening, and as part of Menique, they played Cantigas del tiempo nuevo (1969). This made its author, Leo Brower, to take the stage and direct choirs Diminuto and Solfa and The Beehive actors.

Dressed as a tree feller, one of the characters of the play, Leo led the children and extracted from them a great sensitivity to sing. Brouwer was accompanied by a group of musicians: Ernesto Oliva on piano and Annabel Gutierrez with the harp and Eylin Marquetti and Manuel Vivar on percussion.

Another composition by Brouwer was “dramatized” and played by child actors. Several ways of making music with paper (1970), is a didactic piece in itself, as it shows the kids different ways to make music like that was indicated from the scene with the touch of Cuban clave.

Seductive by the acting ability of its actors, Menique a flor de labios had just a “little sin”, in my opinion, lack of organicity that at times was the inclusion of music in history and caused at two certain dispersion in the public. However, the work was a close luxury for a festival that promotes the perfect pairing for smart arts.