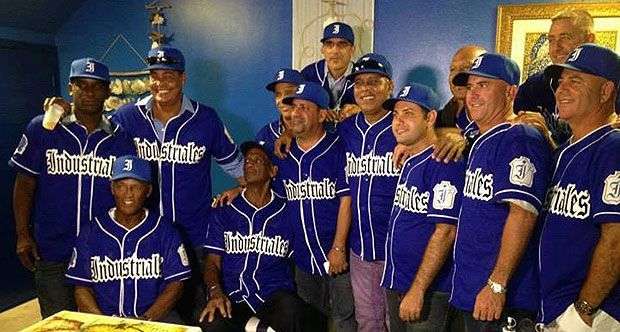 Happily, Industriales is already in Miami. After some malicious rumors and intentions intending to frustrate the project of ¨Somos Cuba¨ Company, which was focused on celebrating the 50th anniversary of the Havana’s squad, ten retired players came to America with the firm target to further expand the blue fever through the language of baseball.

Upon arrival, they were expected by a huge retinue that erupted when seeing again Cuban baseball stars, true symbols of the history of Industriales, lasting over half a century. Among them, the spectacular second baseman Rey Vicente Anglada said he was happy to make the trip, “which I feel will be very good in all respects.”

“This is a reunion that we owe each other and we just want to hug so many friends and fans who still love us everywhere. We know that there are many followers of Industriales in Miami, and also those who were glad to see us losing. This effort is made for all of them ​​,” Anglada, visibly excited to reunite with his son, told the Nuevo Herald.

From Miami, OnCuba could confirm the extraordinary atmosphere that reigned at the reception, but also knew that there is uncertainty about the game against ancient glories of the blue team who now reside on U.S. soil, which is the highlight of this project that will mark a precedent for future encounters between Cuban players.

Also, during coming days the delegation will offer multiple interviews and have community tours and activities, and on Wednesday, August 21, they will attend the modern Marlins Park, where they will witness the match between the LA Dodgers and the Miami Marlins, unique opportunity to share with the two bright stars in each of squads: the explosive outfielder Yasiel Puig and pitcher Jose Fernandez, respectively.

As a coda to these events, three games are scheduled in Tampa and Miami on 23, 24 and 25 of this month, which are supposed to be between the players from here and there, who then will conform only one team to face another Cuban squad made up by players who did not worn the blue jersey.

In Cuba, the silence regarding the event persists, policy in accordance to the silence that existed in January when it was commemorated the 50th anniversary of the Havana Lions, who were by then still immersed in the National Series and even playing at home, the Latinoamericano Stadium.

For no apparent reason, the history of the beloved Cuban baseball flagship team was avoided, to the point that the real celebration takes place, almost eight months later, at just 90 miles from Havana.