byAlejandro Ulloa García
in Technologies of Communication and Media
0 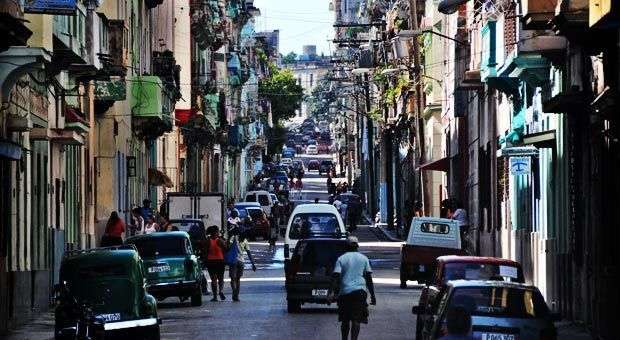 While on the island and beyond many people are saying that things “are changing “that “the thing moves ” , and certainly the measures Raul Castro government endorse these expressions, the “country where we are going ,” is not yet all clear .

On Thursday, the head of the Permanent Commission for Implementation and Development, Marino Murillo Jorge, submitted to the Council of Ministers a report on compliance with the Guidelines for 2013. After a lot of information, a very interesting fact appears: Marino Murillo said “we are currently working on the proposed conceptualization of the Cuban Socialist Economic and Social Model Development, and the foundations of the long term Social Economic Development Programme of the country.”

And this might be news if forget the fact that last December , before the final session of the Cuban Parliament , Murillo claimed almost exactly the same and , a year later, the ” Cuban model ” road map is still not known , although the guidelines are kind of a Bible for the “socialist Cuba ” that ” is being updated ” .

Only in mid- 2013, again in Parliament, we could know something about is that there will be no “ownership transformation, but a modernization” of its management, in the words of Murillo. And he added that “we should go to a less administrative functioning of the economy”, with a preponderance of planning, in addition to “business system modernization “to “change the game for the socialist state enterprise”.

With these small glimpses, the Cuban project for a “prosperous and sustainable socialism” continued to be built in 2013 from the offices, without much actual participation of citizens and leave balances that are having alerts go off.

The announcement of the Gross Domestic Product (GDP) reached in 2013 is one of the most telling indicators of the present and the future of the island. According to the report of the Economic Commission for Latin America and the Caribbean (ECLAC), released on December 11, 2013, ” the slowdown in economic growth in several South American countries and the delay of Cuba in implementing its investment plan and buildings” cut its growth outlook to 3.0% .

This number, expected at the beginning of the year to be 3.6%, was 2.7% in the end, according to Adel Yzquierdo Rodríguez , Minister of Economy and Planning , on information to the Council of Ministers prior to the sessions of the National Assembly of People’s Power .
The presented causes were mainly the “breach of revenues in hard currency, as well as in manufacturing and construction.” However, these cases tell us little if you do not understand some of the shortcomings of the current package of measures that the Cuban government implements.

Until now, much has to be done to renew, at least in principle, the Cuban political and economic system. That first impulse has succeeded in enhancing the private (self-employed) and cooperative work, as important sources of family income, has reshaped the role of ministries and Party officials in matters of government and administration. Immigration reform, housing, social and other old debts have also achieved the national scene to be full of “change.” But still pending is where these changes fit in the Cuban social project.

Agriculture, for example, is one of the sectors that have suffered this inconstancy.

The economist and researcher Armed Nova, winner of 2013 Temas magazine award in the form of Social Science, places the agricultural sector as the vortex of any change for the Cuban economy, according to an interview with journalist Milena Recio .

“Because of the multiplier effect” of the agricultural sector, Nova believes that is where it should begin to accelerate. “It’s important role in food production, import substitution, the generation of renewable energy as an important supplier of raw materials, generating exportable, etc. . Furthermore, this sector employs 20 % of the economically active population. About 4 million Cubans depend on their income levels in this sector and we are 11 million Cubans. “

For Nova, as other specialists , “the problem ( … ) is not in circulation, but in addition to these production and decentralization measures in marketing would be appropriate to remove the obstacles in the starting point , which is the production , and encompassing for the entire cycle : production-distribution- exchange and consumption. “

Another fundamental starting point are the municipalities, which so far have not seen many changes in its comprehensive scope and are urged to reverse the structure of national development planning .

On this regard, and as announced by Lina Pedraza , Minister of Finance and Prices , ” property tax for local development by national institutions begin to benefit another 25 municipalities , which will reach 47 (out of 168 ) favored by the funding source. “

In the Last Thursday on the Temas magazine in November, dedicated to “Development ” , architect and director of the Centre for Local Development ( CEDEL ) , Ada Guzón , noted that development policies to municipalities have been mainly by sectors and universal, non-territorial , so they have largely ignored the needs of each locality.

To do this, the municipalities should strengthen their local governments and establish priorities consistent development that mainly includes the real needs of the people who inhabit them. Only local development, harmoniously integrated to a national strategy and popularly – built – can generate economic wealth and, above all, social ones, looking for the sustainability of the Cuban project.

This last point is critical when you want to articulate the material changes with the “mentality”. The Cuban social structure must be able to generate, implement, evaluate and redirect transformations to popular knowledge and power.

The scarcity of “real participation of citizens” affirmed at the beginning of this text is not idle. While Cuba just adopted a new Labour Code, where millions of Cubans participated throughout 2013, several indications remain to argue that the Cuban leaders understand the need for effective public participation.

Recent bans on 3D Cinema halls, the “correction” of licenses for dressmakers tailors, arbitrary creation of many non-agricultural cooperatives, and exclusion of citizens in the fight against corruption, the videos are circulating but the press doesn’t mention them-are some of the symptoms that reveal this “shortage”.

And it is not about consulting everything of vitiate the already damaged channels of participation, but to include, accept, probing and feeding public opinion towards generating that “where we are going to” that so many wonder.

In that last Thursday Professor of the School of Communication at the University of Havana, Elena Naples, argued that “we were supposed to plan from a desired situation, which tells us which paths we take to reach it. To the extent that the ability to define the course of that position is opened to different groups, or conversely is concentrated on a core, the richer the universe or, in contrast, be more closed, possibly the design will be. “

About to start 2014, the sessions of the National Assembly of People’s Power, if we summarize, have made clear we will have next couple of complicated, intense years.

With growth of 2.2% of GDP, which does not meet the needs of development planned by the government, will “require of all actors on the economic stage enhance the enormous reserves of efficiency and rationality and organization to achieve superior results, ” President Raul Castro explained in his speech to the Assembly, which does not look good for the family budget.

Also is planned for 2014 the opening of a first portion of the Special Development Zone Mariel and the beginning of the elimination of the dual currency, possible indicators of economic improvement, especially in the field of competitiveness of “made in Cuba “products and business efficiency.

However, 2014 will start without even favor the vast Cuban professional sector, which has not been reflected in almost none of the economic measures and continues to migrate out of the country or work with lower professional requirements, but with higher incomes.

With these lights and shadows of Cuba “for a prosperous and sustainable socialism”, ends 2013 with big gains, and also with varied concerns and uncertainties within the population, which only appease for the days of rum and roast pig coming ahead.

“A Cuban fight against underdevelopment”: Interview with Juan Triana

"A Cuban fight against underdevelopment": Interview with Juan Triana