Revelations from a reckless man

Davidc
in Technologies of Communication and Media
0 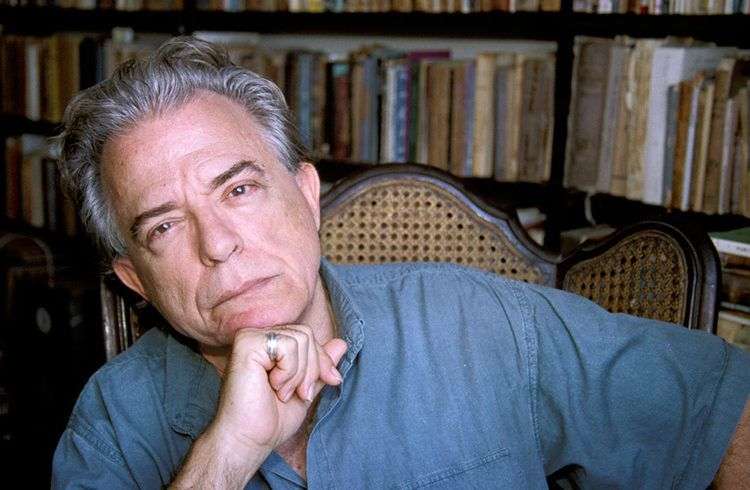 Anton Arrufat´s strange last name comes from his maternal grandparents, who were born in Lebanon and died in Cuba. His father’s parents, however, were Catalans, and it would have been difficult to predict what type of man would have been someone who carries in the blood remains of two Mediterranean cultures so different: the one of the ancient Phoenicians and Arabs, traders since the beginning of times, and that of the proud Catalans, by these days a bit hopeful about their old desire to be independent of Madrid’s power.

It seems , however, that the greatest influence on his character was left by the Jesuits, because as a child, he studied at the Dolores College, an institution that belonged to the Society of Jesus before the triumph of the Cuban Revolution: according to himself, he has sober habits, eats just a bit and wakes up early. He also has the habits of certain medieval monks: reading a lot. However, we must not be very observant to understand that the severity of the Ignatians did not teach him to forgo the pleasure of conversation. He speaks with grace and waste; builds compliments and insults as quickly as cunning and those having the honor of talking with him will never get bored. That ability has probably brought ​​him fame, but it’s hard to tell whether of gentleman or black beast. Opting for one of the two is in the hands of the reader.

It only remains to add that he won the National Literature Award and the Alejo Carpentier Prize in 2000 and that he belongs to a generation of writers-that of Guillermo Cabrera Infante and Severo Sarduy- more than enough renowned within Spanish American literature.

Some have said that you are a man of sharp tongue , is it true?

It must be true if they say it, even though the world is a world of liars or masked men, as Marti said. That probably comes from my youth. In my youth, both at home and on the street, I was an intolerable person. Later that fame was spreading and as I walked next to Virgilio Piñera, who was another intolerable person, an atmosphere was formed throughout the years that I do not want to destroy in no way…

Let me explain it. Lezama taught me that: “people comment out there many things that I have said; I assume hem if they are intelligent, but if not, I say I did not say them”. That sounds nice. In addition, the fame of which I have spoken precedes me anywhere I go: people tremble, look at me with open eyes, as frightened…

I’ll tell you something very funny that once happened to me. In Miami, a while ago, I went to see the film “Chamaco” the day of its release. I remember it was in a very elegant movie- theater, with many lights; it was something like Hollywood: with red carpets, cameras and TV flashes everywhere. There were two men behind me. One seemed to be sixty or seventy, and after some hesitation, he approached me and told me: ‘you do not know, but when I was young , I saw you every night drinking coffee with milk at the 12 and 23 cafeteria ‘. At the time I thought the man had a very good memory because it is been a long that that cafeteria does not sell that exquisite coffee and bread with butter they used to make in 1960s; and talking about it is like talking about prehistoric times or extinct animals. At that time I was very young and when I finished working at Lunes de Revolución magazine, along with Virgilio Cabrera Infante and others we went to that cafeteria the man referred to satisfy hunger.

I remember he told me later: “I would have wanted -he was speaking very nervous, to tell you … to talk to you, but I was so afraid and I never approached you to talk …” and I said: “but now you’re talking to me”, then he replied: “yes, because now we’re both old men and we have just a few time to live .” So, you see, it seems that nature has endowed me with an uncanny ability to instill fear in some people, but basically I am a kind and good human being.

You have mentioned Virgilio Piñera more than once in the short time of the interview; I would like you to describe the friendship with him.

I’ve talked a lot about Virgilio and I have a book dedicated to our friendship: —¨Virgilio, entre él y yo¨ (Virgilio, between him and me)—. He was, first of all, my friend, and I’ve always admired his writer ethics, which was to devote himself entirely to literature, always saying what you think, no matter what others think of you. But I will not bore you by talking about Virgilio; I better tell you a very funny story of him.

When Virgilio first traveled to Argentina, he was not well regarded by the writers of that country. He had founded along the Polish writer Witold Gombrowicz, a marginalized and ironic man like him, a magazine where both attacked the figure of Victoria O`Campo. Victoria was at that time the Tsarina of Argentine Culture: she paid Sur editorial, the magazine of the same name, and was also intimate friend of Borges; lashing out at she was like assaulting all that part of the Argentine intellectuals and, of course, neither of them deserved Borges´ friendship.

But that enmity did not last long, and now comes the most interesting. When Virgilio became reconciled to Borges, it was very common that they both cited each other for a stroll. Borges made ​​it often with his friends because he was starting to become blind and needed a guide for his evening walks. And according to Virgilio, during those walks Borges used to sing pornographic tangos … Just imagine those two beings together, Virgilio and an almost blind old man with a cane, singing pornographic tangos through the streets of Buenos Aires. Who would have imagined, Borges, as cultured and refined!

You have said on other occasions-and perhaps this is related to your sharp language- that a writer should be reckless . Why?

For the writer there are two important requirements, which may answer your question. The first is that literature is made of repeated shapes, ossified techniques, and the work of a writer precisely consists in change them and tell I a different way the same what other writers have said throughout history. The second imperative is that the writer has to be one that accepts the risks of what he says; he needs not to fear the danger of making public his thoughts and words, then, let’s face it, there is always a danger when you are devoted to any literature or intellectual work. If a writer knows that his words will have some unpleasant consequence, it is likely him to end not as a writer. That is why Voltaire said: “when you are right and the state does not, the life of a writer is very dangerous.”

And are you a reckless writer?

Well, the consequences prove that I am, I said what it should not be said at a time when it was not nice to say those things. Also, I’ve said things that have been also considered reckless. The time will gradually put them into place, and those things that are considered reckless today, will be prudent tomorrow. I think that recklessness also depends on the society in which one lives; if the society in which you live is very rigid, as ours was, that many times allowed very few things, then what you say will not be well seen. But thankfully, those days are gone.

Not long ago you said in another interview, paraphrasing Lope de Vega, the following sentence: Cuba hurts me. What hurts from Cuba to Anton Arrufat?

Well, Cuba, as any other country, can cause a lot of pain. However, from among those pains, one hurts more than others. Cuba is an entire nation in the creative, intellectual, artistic and spiritual order. If we travel to other lands and study and appreciate the genius and customs of other peoples, we understand that we are different, that we are Cubans, although partaking in the human universal issue. It may be said then, that we have built our own culture.

But in the social order, this is a nation in a limbo and a sad people. We have not managed to do something that support us, that does not force us to march, that does not make us think of the exile. The exile is a Cuban tradition, not just a momentary horror, but something old as our country. Cuban people of the nineteenth century and that of before the triumph of the Revolution also left for whatever reason. However, paradoxically, they founded a nation, battered, it is true, but a nation after all. It’s something really mysterious.

Cubans living in Miami, when you visit that city, take you for a walk and say, ‘look everything we have done. ” And I always tell them, “and why didn’t you do it there? ». I do not mean by this that they had to stay after 1959, but “why did not they do it earlier? ‘. Well, I found a key to understanding why they did not do it before: because they entered a system that others had created; they raised this rich city that Miami is thanks to an order created by the Americans. If they had had to create that order in Cuba, they could have never been achieved it because they never knew how to found a society for all in the land of their birth. And the latter also applies to Cubans living here.

It seems that we are able to arrange a prosperous life just outside our country. We’ve built a distinctive culture, a nation that survives thanks to the ideas, but we still need the material slack and economic wealth to achieve complete wellness. So this is what hurts me most of Cuba: being in spirit what we have not been in reality.

The Special Development Zone Mariel from within

Rosana Vargas, between geometry and desire