Supercrónica Obsesión: music and activism get well along 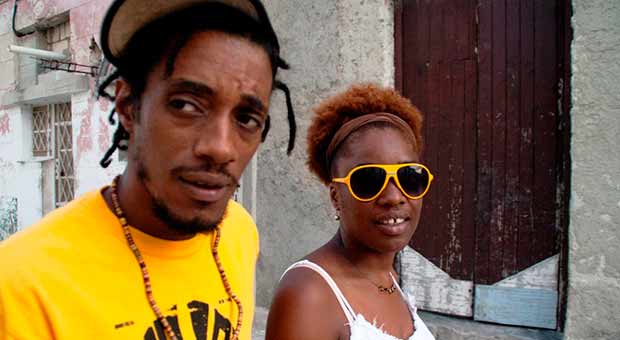 The Supercrónica Obsesión band was founded on June 25, 1996. Trapped by the warm and new influences of rap, its members Alexey Rodríguez aka…el tipo este.. and Magia López rapidly joined the vanguard that stared the process of appropriation and definition of the genre within the Cuban culture.

Since then, their members became loyal and proud representatives of afro descendants, which goesfar beyond their roots, it is in their aesthetics and their art. This band specially stands out for its ascending course, which is dedicated to what they call “Afro Cuban thinking”[1].

Obsesion’s music reflects an interesting balance of genre and a stylistic and musical diversity, which moves from the work with elements of jazz, Cuban music and a wholerange of trends from African origins present in Cuba and Latin America to the creation of diverse lyrics, in which the message always chronically proposes changes of ways of acting and stereotyped attitudes.

Along its career, Obsesion has successfully combined good art, humor, and new desires with activism, communitarian work and the struggle for a better world.

The band has not only received important recognition and awards in festivals, but it has also performed in Cuba and abroad, along with remarkable musicians. Besides, it has joined the work of many renowned Cuban artists like audiovisual director Roberto Chile and plastic artists such as Alexis Leyva (Kcho) y Eduardo Roca (Choco).

A record in Cuba for black people’sculture and tradition

Obsesion has created many songs on black people’s culture and tradition and the complex world of racial relations in Cuba.

In 2011, the band released the album El Disco Negro de Obsesión, in MP3 format and in a singular and creative physical edition.

Just as its director, Aleixei Rodríguez, stated during the concert for the releasing of the album, the band had initiated the path in the fight against racial discrimination many years ago, when Cuban historiographer Tomás Fernández Robaina –who he recalls as his teacher– invited them to go deeper into some historical facts that marked the identity of black people in the Cuban society [2].

Magia Lopez explained that this album was produced and released on purpose in the context of the designation by the United Nations of 2011 as the International Year for African descending People [3].

In the note of the record, Cuban intellectual Marcel Loueiro wrote:

You have in your hands a tiny luminous fragment (huge for its future) of Cuban culture; the synthesis of a concept; a way of facing life, memory and politics, that twinkles in the mirrors of living dead people such as Aponte, Plácido, Maceo, Banderas, Ivonet, but mainly in the mirrors of so many anonymous black people that make the Cuban nationality possible with their perennial presence (from remote sugar cane plantations and independence wars to humble neighborhoods in Cuba today).

This album, which was produced independently, records 12 tracks, 8 rap songs and 4 interludes.

I believe I’m not overstating when I say this is a material of reference in the Cuban discography; it is a conceptual piece on topics like black beauty, social marginalization, racial stereotypes and the role of rappers in these issues, a kind of work that becomes a crashing denunciation against racism, but a kind of speech free from harshness [4].

This is the second album of the band and it was presented that year at CUBADISCO and received the first prize in its category.

“Calle G” is one of the songs included in the album El Disco Negro, which, as expected, brought about debates on how racism is perpetuated in Cuba nowadays, specifically from certain symbols linked to particular events, not at all gratifying, that have taken place in the island and have been avoided in the official history.

That is the case of the statue of Cuban General José Miguel Gómez, which is part of a magnificent mausoleum located in one of Havana’s most important intersections, la Avenida de los Presidentes o Calle G (the Avenued of the Presidents or G street), where there are also other sculptures dedicated to Latin American heroes like Eloy Alfaro, Simón Bolívar and Benito Juárez.

It is necessary to note briefly that there was a killing of thousands of black and mixed race people during the presidency of José Miguel Gómez in 1912. The event, known as “the little war of 1912”, has been silenced in the official history. So, with the song “Calle G”, Obsesionplaces itself in the vortex of debates on racism in Cuba. Its lyrics denounce the presence of this sculpture:

(There is in Calle G or Avenida de los Presidentes,/ A big statue of José Miguel Gómez that would offend Pedro Ivonet if he saw it/ I don’t get what’s that guy doing there, after the Revolution./ What happened with the memory of this country?/ I don’t about you, but he doesn’t represent us!/ (Don’t try to convince me!)/ It is clear for me he is blatantly glorifying racism./)

Yet, it brings a solution from hip hop culture: “I summon Cuban graffiti/ If they don’t take it down we paint it with graffiti!”

In a debate held via email [5], several intellectuals gave their points of view on this matter; some were in favors and some were against. However, the important thing was to unveil such a shocking issue as the legitimacy granted (or not) to some sad events in the national history since the Cuban Revolution.

During the debate about the role of rap as creator of social awareness ..el tipo este..commented:

We are extremely happy that our song “Calle G” had raised such polemic debate, which complies with our purpose of denouncing first and debatingthen. If our song fulfilled that purpose then we have covered halfway of the road already. It is said that there isn´t absolute truth but we have our truth and we stand by it.

In 2008, Obsesion undertook the project El Club del Spendrú (Spendru Club) [6], with the main objective of proposing the reunion of several generations of young people with music and fashion from the 70’s.

From 2013 on, the project also includes other artistic manifestations such as photography, poetry and fashion design, with their own resources and based on the plastic work by Javier Martínez.

At present, this club is being redefined in order to be in line with the new changes taking place in Cuba. We consider there are increasingly more social gaps and we have to do our work without knowing how this would affect us so as to have a more effective influence in the sector of the population we are interested in. We are studying how to reinforce the image of black people by using clothes looking for more affordable alternatives and proposing options with our example. On the other hand, we are also working on the embellishment of our community [7].

Outfits from that epoch that highlight racial conscience and black beauty adorn Obsesion’s presentations at the Club, during which they focus on issues relatedto these topics as well as classic foreign songs from Brazil, the Caribbean, and the US, etc.

[2] Words by …el tipo este… during the release concert of El disco negro by Obsesión, March 17, 2012 at the Covarrubias hall in the National Theater, Havana, Cuba.

[3] Magia López during the release concert of El disco negro by Obsesión, March 17, 2012 at the Covarrubias hall in the National Theater, Havana, Cuba.

Where was Raúl Paz?