maya
in Technologies of Communication and Media
0 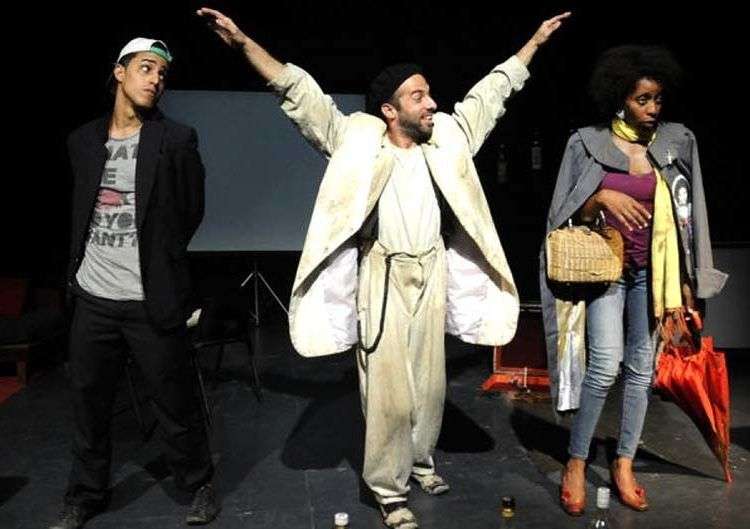 The new version of ¨Delirio Habanero¨ has had great success within the segment ¨ De la buena memoria¨ which included, as part of the 15th edition of the National Theatre Festival in Camagüey, proposals that have become milestones in Cuban scene. Exclusively to OnCuba, the actor Yasel Rivero talks about his character -¨El Barbaro-, ¨in the new staging by Teatro de la Luna Group.

The lights come on and a mythical character appears on stage: baton in hand, width suit, wide-brimmed hat. The representation begins and actor and character get mixed . This was the way in which the play Deliro Habanero was dreamed by the playwright Alberto Pedro, his author.

“Raúl Martín made ​​me the proposal. We had talked about it several times but I was always busy until he told me we had the opportunity to present the work in Habanarte. Although I was exhausted by other theatrical processes , accepted because I love that character, “Rivero says.

Yasel is young, a native of Santa Clara, but he seems to be possessed by the spirit of Bartolomé Maximiliano Moré, ¨Benny Moré. ¨He has had to embody a difficult and strenuous role, especially when facing the weight of comparison. It is no secret for no one that previously, the production was defended by that giant of the action that Mario Guerra is.

“I’m happy because many people of my generation do not reject any of the two staging. Some are more involved with us. I do not know if due to a power problem, or ways of thinking. I feel lot of respect for the actors who were involved during the first nine months in a very serious staging process. Comparisons do not bother me because I tried to seriously confront it. Public response makes me feel great. I’m not entirely pleased because we can do much more. ”

How did you take the preparation of the character?

“We started to see the video and observe the basic structures of in, outs, and choreography. For two weeks we were working on the staging to see if we could get to the characters. Our personal proposals on certain situations, atmospheres, solutions arose when learning the primary choreography.

“I get along very well with Mayito (Mario Guerra) since I was a student of the Higher Institute of the Arts (ISA by its Spanish acronym) where he was a professor. I got nurtured from the idea raised by Mayito because I strongly agree with it .

“After seeing the recordings we incorporated Benny’s songs and gestures to see how it worked in my vocal range. Somehow, I could be confused with him because ¨El Barbaro¨ has studied and admires him to the point of believing that he is Benny. It seems unwise to assume the character thinking that I was Benny More because I’m white; ¨Reina¨ says it in one of her moments of crisis.

“To me this character is the symbol of a place in decline. He expresses himself through the alcohol, psychiatric conditions, and certain schizophrenia. He is very complex, because the characters of a drunken and Benny are mixed within him. As a result of this delirium, those elements converge and come without warning, inconsistently. He mentions, as a folk and traditional element, the spirits of famous dead musicians. However, there is a speech behind that: like the Abakuá element when talking about dead people. ”

Do you consider this character as the most difficult or you have had other performances like this?

“It’s one of the most difficult characters I’ve played in my career but so is that of Horst, within the play Bent. The latter I made it from another point of view, with a different dynamic. I also found it very complex to perform it. It was a character very far from me, a kind of work that I was never done before. However, embodying Benny was easier for me because I like him a lot. ”

Are you satisfied with the reaction of Camagüey audience?

“At first I felt they were looking forward-not with a dark sense, – it was like a kind of test to see if I was at the expected level. That also happened to me in Havana. I felt that weight but when you’re sure and really engaged, everything goes p ositively. ”

Who has influenced your training as an actor?

“In my adolescence it was very nice to think the theater from the realistic point of view and Konstantin Stanislavski method with a teacher who studied in Russia. Then I was influenced by all the experimental area of ​​the National School of Arts (ENA by its Spanish acronym) in Santa Clara where many workshops were held with ¨Magdalenas sin fronteras¨. These workshops opened me the spectrum to unknown places. I had teachers that I admire very much.

” The strongest areas of my training were working with Alexis Díaz de Villegas -aka Majá- in ¨La otra orilla¨. It was a time of training, search. Another important area during my time as an ISA student was the project ¨Tubo de ensayo¨ which taught me to understand the theater from other ways and forced me to study more because it broadened my cultural universe. ”

Are there any new projects with Raúl Martín?

“For the moment we want to keep displaying the play . We enjoyed it very much. There are plenty of people eager to see it because it is considered as a museum work to be preserved in Teatro de la Luna’s repertoire and I would like it not to die. Later, Raul wants to do something new with Yordanka Ariosa, Luis Manuel Alvarez and me. We do not know what will be yet. I would like to participate in Raul´s other staging. “