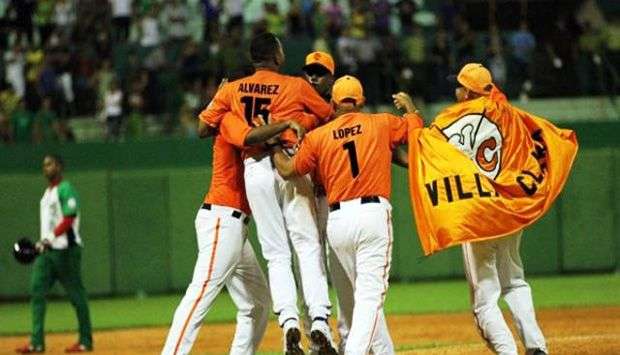 Villa Clara Oranges are back on track. They won the first ticket for the final of Cuban baseball. They beat Cienfuegos Elephants, a team that was considered as favorite by most of the experts.

In a bitter and quite emotional play off, the disciples of Ramón Moré prevailed in six games over their Southern rivals. But when talking about this semifinal we could not ignore, obviously, the three fierce duels between right-handers Freddy Asiel Alvarez and Noelvis Entenza.

Despite in one of the playoff games, on one hand, Pavel Quesada had a remarkable batting performance by hitting 3 for 4 (including two doubles and a homer) – or the stupendous pitching relieves of the closer Dunier Ibarra when heat went up in the ninth inning, there is not doubt that Cienfuegos´ best man was, despite the defeat, the speedy Entenza.

The two right-handers faced each other three times, but win was always achieved by Alvarez, who was questioned sometime during the regular season for his unstable performance, and was even identified by fans as the shadow of the immeasurable pitcher who had been considered the first pitcher of Cuban national team.

But Alvarez has totally changed the story. He won three of the four games of his team and, as if not enough, on each performance he filled of zeros the scoreboards of Augusto Cesar Sandino and September 5th stadiums. He showed himself immutable, with great s erenity, and he was also well backed up by an excellent defensive work by his teammates and himself on the mound during the most stressing moments. His best and memorable performance was the first one where he threw sliders to 86 mph and fastballs reaching 94 mph that could never be hit by the southern elephants.

Luck always eluded Entenza or maybe his rival surpassed him in tricks. Entenza lacks nothing to succeed in Cuban baseball -indeed he has already done it-and, in fact, he fought without complex against Alvarez. If Villa Clara’s number 15 is full of phlegm in the box, Cienfuegos´ number 90 is the opposite. While in the mound he shows euphoria and is always showing off, something he could boast due to his immense talent.

Entenza´s three games were also a masterpiece, but the best was the last one, where he crying told his fans he would obtain the win, the one in which he came out like a wild lion, where he almost perfectly mixed his extremely slow breaking balls with a speedy fastball, able to intimidate even the most daring of batters.

Finally, in an austere press conference, Alvarez made some intimidating statements, he was angry for the critics he received during the regular campaign and said: “This is for the ones who did not believe in us, we are here for you to keep on criticizing, I did what I had to do and won the three games.”

Entenza, however, staring at the floor, told:

“There is no joy when you lose”.